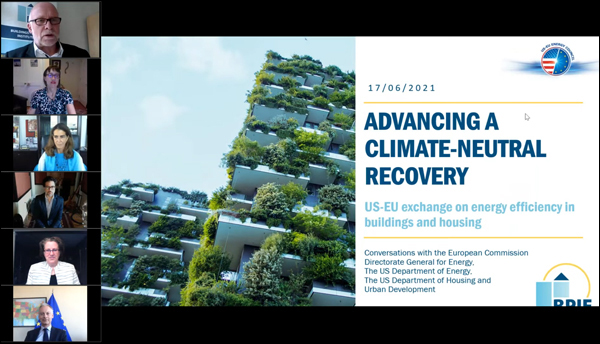 The first webinar of the US-EU Exchange focused on advancing a climate-neutral recovery in the United States and Europe.

“The United States and the world face a profound climate crisis.” Thus begins Executive Order 14008, “Tackling the Climate Crisis at Home and Abroad,” which President Biden issued on January 27, 2021. The actions outlined in the executive order not only led to increased federal efforts to address the crisis ahead of the United Nations (UN) Conference of the Parties (COP26) in November of that year, but it also echoed across the Atlantic, where partners in the European Union (EU) saw clear parallels with their own NextGenerationEU effort.

It was in this spirit that the German embassy approached HUD’s International and Philanthropic Affairs Division in late April 2021 regarding a potential partnership on energy efficiency in the building sector. The request was timely: in response to the executive order, HUD was in the process of developing its Climate Action Plan, an effort it later highlighted at COP26. The importance of the building sector in addressing climate change was also receiving renewed focus. As the UN highlighted later that year, energy consumption “for the construction and operation of buildings” totaled “36 per cent of global demand and 37 per cent of energy-related C02 emissions in 2020.”

Under the auspices of the Strategic Partnerships for the Implementation of the Paris Agreement, HUD joined the U.S. Department of Energy; the European Commission (represented by the Directorate-General for Energy and the Delegation of the European Union to the United States); Buildings Performance Institute Europe; the German Corporation for International Cooperation; the Institute for Market Transformation; and Germany’s Federal Ministry for the Environment, Nature Conservation, Nuclear Safety and Consumer Protection for the webinar series US-EU Exchange: Advancing the Transatlantic Economic Recovery With Building Renovation and Clean Energy Solutions (Exchange).

Over the course of the ensuing 9 months, the Exchange hosted five webinars with representatives from both sides of the Atlantic: Advancing a Climate-Neutral Recovery (June 17, 2021), How To Achieve Energy-Efficient and Affordable Housing (September 23, 2021), Finance for Energy-Efficiency in Buildings: The Process (October 20, 2021), Job Creation and Workforce Development for Building Renovation (December 2, 2021), and Building Standards and Codes To Drive Renovation (January 11, 2022).

Contributions of European counterparts were equally informative. Place-based approaches such as the zero-energy districts presented by Stefan Moser, head of the Buildings and Products Unit for the European Commission, and the Initiative for Building Renovation highlighted by Isidoro Tapia, senior economist in the Energy Efficiency Division of the European Investment Bank, provide useful case studies. In addition, the Italian government’s Superbonus tax credit program detailed by Michele Russo, founder and chairman of Epta Prime, as well as EU skill development programs such as the transition pathway described by Roman Horváth, policy officer for sustainable industrial policy and construction at the European Commission, offered valuable insights for policy development.

In addition to the webinars, the Exchange also published Glossary of Terms: Energy Efficiency and Building Policies in the EU and US on September 27, 2021, as a reference for practitioners. Guidebooks of significant policy and regulatory provisions for building efficiency in the EU and United States are forthcoming.

With recent data indicating that “the last seven years globally were the seven warmest on record by a clear margin,” the transatlantic dialogue facilitated by the Exchange is as important as ever. Thus, as the Exchange draws to a close, HUD continues to engage with international partners on this pressing issue. Indeed, in December 2021, HUD staff participated in a closed-door seminar on building decarbonization hosted by the Organisation for Economic Co-operation and Development (OECD). As President Biden stated in the executive order, “Domestic action must go hand in hand with United States international leadership, aimed at significantly enhancing global action. Together, we must listen to science and meet the moment.”