How Communities Are Improving Their Homeless Services Capacity 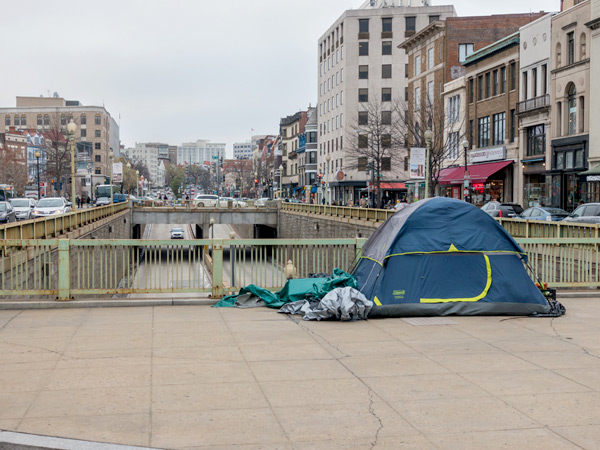 Communities such as the city of Washington, DC, which includes the Dupont Circle neighborhood (shown), are working to better assist homeless individuals and families.

Many communities have recently reformed their homelessness programs by redirecting limited resources to better serve a wider swath of clients. As part of the 2018 National Conference on Ending Family and Youth Homelessness, hosted by the National Alliance to End Homelessness, officials from three such communities participated in a panel discussion about how they increased their service capacity and improved the effectiveness of interventions for homeless individuals and families. Representatives from Washington, DC; Cuyahoga County, Ohio; and Jacksonville, Florida, described the challenges involved in aligning resources with need and the concrete steps they have taken to improve outcomes.

Although Washington, DC, has the distinction of being one of the few cities in the nation in which the homeless have a legal right to shelter when the temperature falls below 32 degrees, before 2015 the city was able to offer shelter only under this condition, and currently the city has just two short-term family shelters. According to panelist Noah Abraham, senior program analyst with the city’s Department of Human Services (DHS), the city’s rapid rehousing program aims to free up shelter beds by placing homeless families into housing; however, landlords are often unwilling to rent to these families, and those families who do get housing often have trouble remaining in it.

DHS has been tackling these challenges through policy and programmatic changes that expand the reach of their services and make better use of the city’s existing resources. In May 2015, the city’s homeless shelters began conducting the intake of homeless families throughout the year instead of just in the winter months. The city also plans to close its largest family shelter, DC General, and open several smaller shelters across all eight wards. To improve the effectiveness of rapid rehousing, DHS has reformed its process for paying rent to landlords. Previously, landlords would receive their rents as two payments: a subsidy payment from the city and a second payment for the remainder of the rent from the tenant. When the city discovered that many homeless clients were being evicted for owing small amounts of money they had difficulty paying, DHS began making a single rent payment to the landlord on behalf of the tenant, with tenants paying their portion to the city. DHS staff now meets with landlords to explain the new payment system and help fill their vacant units. By reducing the burden on landlords and helping their homeless clients meet lease requirements, DHS was able to increase the number of units available for rapid rehousing, thereby increasing shelter capacity.

In Cuyahoga County, Ruth Gillett, manager of the Cleveland/Cuyahoga County Office of Homeless Services, identified a shortage of shelter beds as the organization’s biggest constraint in serving the homeless. Like Washington’s DHS, the Cleveland/Cuyahoga County Office of Homeless Services does not turn anyone away from its homeless shelters when space is available. According to Gillett, many people move to the city and county from other parts of the region looking for work, and those who cannot find work become homeless and “stuck.” As a result, the county has become overwhelmed by the demand for homeless services.

Because of their limited resources, the Office of Homeless Services’ goal is to move people out of homelessness as quickly as possible. Before homeless individuals or families are offered shelter, OHS staff engage them in a diversion discussion to determine what it would take to get them back on their feet without entering shelter. Clients may be offered small subsidies for transportation or food to help them make ends meet, or they may receive other resources as needed to return to housing. For families not diverted, the Office of Homeless Services created a “progressive engagement” model of support to help them exit the shelter into housing. Under this model, every family is offered rapid rehousing, and every family receives the same subsidy amount of 100 percent of four months’ rent and a security deposit. Within 7 days after being admitted to the shelter, families are referred to the county’s rapid rehousing agency, which works with each family and a shelter case manager to find a suitable housing unit within 30 days. After being placed in a unit, the case manager helps the family transition by referring them to community resources. The progressive engagement model has successfully reduced the average shelter stay in Cuyahoga County, increasing the number of shelter beds available at any given time.

The Jacksonville region of Florida faces many of the same challenges as Cuyahoga County. Dawn Gilman, chief executive officer of Changing Homelessness, Inc., the lead agency for the region’s continuum of care, acknowledges the need for diversion to help increase shelter capacity. However, Changing Homelessness has struggled to compile consistent funding for diversion because many different agencies are involved in providing diversion resources. Also, unlike Washington, DC, and Cuyahoga County, the Jacksonville continuum of care region does not have any low-barrier emergency shelters. The only shelters available in the region are two rescue missions, which have stricter requirements for entry and occupancy. Because these shelters are mostly privately funded, Changing Homelessness has struggled to coordinate with them to align goals and share data on whom they serve.

Despite these limitations, Changing Homelessness has made changes to increase the number of homeless individuals and families they serve. Before 2012, Changing Homelessness allocated most of its continuum of care funding to transitional housing programs, which provided a two-year housing subsidy for homeless clients placed in scattered-site units. In 2012, the agency shifted most of its funding to rapid rehousing, which subsidizes housing for homeless clients for an average of nine months. Doing so doubled Changing Homelessness’s service capacity and contributed to a 23 percent decline in homelessness in the Jacksonville continuum of care area between 2009 and 2017.

Although Washington, DC; Cuyahoga County; and Jacksonville still struggle with homelessness, their service providers’ efforts to reallocate resources toward more effective interventions and move people out of homelessness as quickly as possible have begun to show results. Investing in diversion and rapid rehousing, supplemented with supportive services, has proven to be an effective method of increasing overall service capacity. The case studies of these three communities demonstrate how small programmatic changes can have a cascading impact through the years.