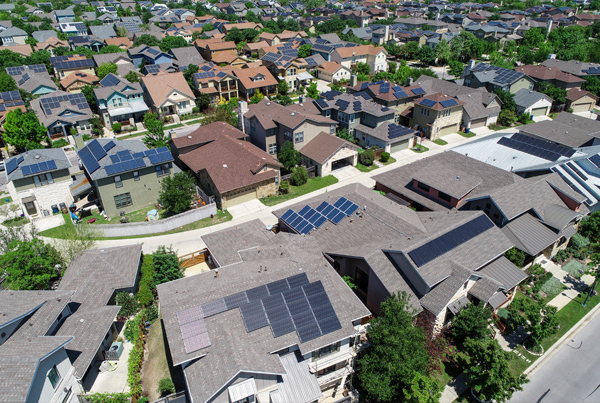 Since the release of HUD’s climate action plan, HUD has updated standards to make it easier to use federal loans on homes that meet minimum energy-efficiency standards and launched a coalition with over 30 state and local governments to ensure new building standards are as efficient and resilient as possible, among other actions. Photo credit: shutterstock.com/Roschetzky Photography

Climate and Housing Are Linked

The housing sector in the United States accounts for a significant percentage of the greenhouse gas emissions that contribute to climate change. The environmental impact of producing and operating housing depends on the construction materials and methods employed and the energy consumption of the resulting dwelling. The location of new construction also can contribute to climate change, particularly when homes are built in suburban or rural areas that encourage car-dependent lifestyles. Meanwhile, climate change has already increased the frequency and severity of natural disasters, putting more U.S. homes at risk of damage or destruction. The panelists explained how natural disasters and other climate-related events have threatened housing in their communities. Stransky explained that in Iowa, stronger storms have caused massive floods that have destroyed thousands of homes, and Hagle-Forster discussed how melting permafrost has lowered the foundations of some homes in northern Alaska. Climate-related impacts, however, do not affect all regions and communities equally. Stransky noted that most Iowa residents who live in flood-prone areas have low incomes. Garrison presented data showing that many low-income communities of color are disproportionately burdened by several environmental and climate hazards.

Greene emphasized that HUD has a significant interest in addressing climate change. The 4.5 million public and HUD-assisted housing units produce about 13.6 million tons of carbon emissions annually. HUD also spends billions of dollars to help families recover from climate-induced natural disasters. Craig presented the findings of a recent HUD study that associated natural disasters with an additional $800 million to $2 billion in Federal Housing Administration claims between 2004 and 2019 — an amount that will likely increase as such disasters become more frequent. In recent years, HUD has taken several administrative actions to encourage the development of more energy-efficient homes and communities. In fall 2021, the department released a climate action plan that Greene praised as “an ambitious document that reflects both the urgency of the climate crisis and our commitment as a department to shift our trajectory.” Since releasing the plan, HUD has updated lending standards to make it easier to use federal loans for homes that meet minimum energy-efficiency standards, launched a coalition with more than 30 state and local governments to ensure that new building standards are as efficient and resilient as possible, and signed a memorandum of understanding with the U.S. Environmental Protection Agency (EPA) and other federal departments to prioritize HUD-assisted communities for electric vehicle charging stations and other decarbonizing technologies. Furthermore, PD&R continues to conduct and publish research on climate and housing. The office has worked with federal partners to improve data sharing to decrease the time needed to allocate community development block grant (CDBG) funds after natural disasters. Although Greene was optimistic about this early progress, he emphasized that these efforts are only the beginning stages of HUD’s plan to combat the climate crisis.

The speakers also discussed existing legislative actions that can help address the climate crisis, focusing on the 2021 Infrastructure Investment and Jobs Act (the Bipartisan Infrastructure Law) and the Inflation Reduction Act of 2022 (IRA). The former includes an allocation of more than $3 billion to the U.S. Department of Energy’s Weatherization Assistance Program, which will allow states to retrofit the homes of low-income households to make them more energy efficient and resilient. According to Wise, these renovations will lower households’ energy bills and improve their homes’ air quality. The act also includes funding to accelerate building code upgrades and conduct research on smart buildings. Meanwhile, IRA includes billions of dollars in consumer incentives for building efficiency upgrades, including extending tax credits for households who install solar panels. Schoeman believes that governments can use IRA strategically to create more affordable housing, particularly because the solar and tax credits are larger when they are applied to low-income communities. The act also allocates $20 billion for EPA to establish a national green bank that can make investments that reduce greenhouse gas emissions in communities often overlooked by traditional investors. Similarly, the Community Reinvestment Act is being updated for the first time in more than 25 years to encourage investments in low-income communities with climate exposure.

In addition to strategies to reduce emissions, panelists highlighted the need for disaster mitigation. “We need to reduce our global warming by 1.5 degrees,” Schoeman said, “but we cannot lose sight that we also have to protect and preserve our communities today, because we may not get to the place where we are able to reduce our global warming.” Houses — and, in some cases, entire neighborhoods — in certain disaster-prone regions must be retrofitted to mitigate the risk of damage. Schoeman highlighted efforts to encourage more resilient building practices in states such as in Florida, where insurance companies are required to offer a discount to owners of single-family homes who incorporate certain risk mitigation measures in their properties, and California, which offers incentives to property owners to encourage seismic retrofits.

The panelists also highlighted resiliency efforts specific to their communities. Hagle-Forster mentioned that TNHA is building several new homes on an adjustable, sled-like foundation that can keep homes level and protect them from the effects of melting permafrost. Stransky explained that IEDA used CDBG funds to purchase homes in flood hazard areas and reconstruct them to green building standards in less disaster-prone areas. All the homes are targeted to low- to moderate-income households, and IEDA offers these households downpayment assistance. IEDA worked with the community to select locations for the reconstructed housing and constructed pedestrian connections between these dwellings and existing community spaces.

The panelists emphasized that climate change cannot be solved in a vacuum and that decision makers must understand the relationships among climate, poverty, and inequality. Shahyd pointed out that equity also must be factored into any solution to this crisis. Policymakers must ensure that the high upfront expense of climate-friendly retrofits do not overburden low-income households. Nevertheless, the speakers were encouraged by several recent policies and programs, and they believe that local entities can better utilize new and existing programs to address this crisis. Wise expressed optimism that, with the right strategies, the administration’s goal of reducing carbon emissions to 50 percent of 2005 levels by 2030 is attainable.

Read the Summer 2022 issue of Evidence Matters for more on the relationship between climate and housing.