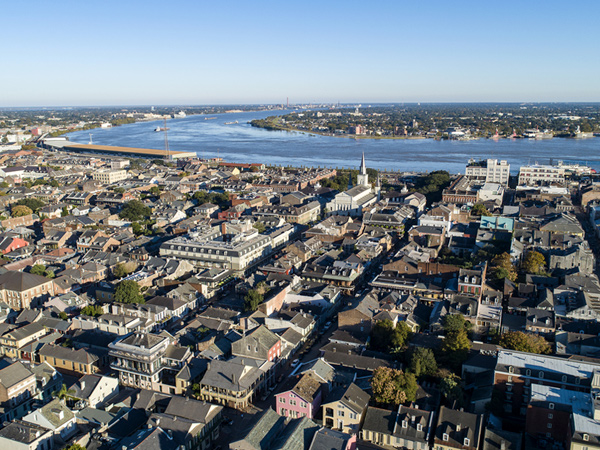 MIT research found that in New Orleans (shown), the payback period for resilient construction can be as short as 2 or 3 years.

In the aftermath of hurricanes Katrina, Sandy, Harvey, and Maria, state and local governments have gained considerable experience in handling the consequences of natural disasters. On September 26, 2019, the Bipartisan Policy Center hosted two panel discussions with government leaders and policy experts to explore the lessons learned from the response to these disasters and share best practices for predisaster planning and postdisaster recovery. Following a keynote by Madhu Beriwal, founder, president, and chief executive officer (CEO) of the security consulting firm IEM, Pam Patenaude, the former HUD deputy secretary, led a panel with former Mississippi governor Haley Barbour and James Rubin, CEO of Meridiam North America, an infrastructure investment firm. The second panel consisted of Terry Dinan, consulting economist at the Congressional Budget Office (CBO), and Jeremy Gregory, executive director of the Concrete Sustainability Hub at the Massachusetts Institute of Technology (MIT). A major theme of these conversations was the need not only to respond flexibly to unexpected situations as they arise but also to use the disaster as a chance to rebuild in a way that is smarter and more likely to meet the community’s future needs.

Beriwal explained that most postdisaster infrastructure spending comes from the federal government through programs governed by the Robert T. Stafford Disaster Relief and Emergency Assistance Act (Stafford Act). She explained that the Stafford Act requires that recovery money be used to rebuild what was destroyed rather than build new projects. Barbour argued that this restriction made efficiently spending that money difficult. Beriwal, however, argued that both the Federal Emergency Management Agency (FEMA) and HUD have created innovative ways to respond to disasters and meet the future needs of communities within the confines of the Stafford Act.

A major program that Beriwal highlighted was FEMA’s Section 428 Alternative Public Assistance Program, which allows communities assisted by the Stafford Act to request a more flexible rebuilding strategy. Through this program, communities identify infrastructure elements they wish to rebuild and explain why rebuilding to an older standard would be inefficient, slow, or cost prohibitive. If FEMA agrees, the community can use its disaster assistance to rebuild using modern building techniques; often, the money saved through these more efficient techniques can fund additional infrastructure that increases the resiliency of the project. After Hurricane Sandy, Beriwal reported that up to $500 million was allocated to New York’s Suffolk County and $900 million to neighboring Nassau County through the Section 428 Program so that their new infrastructure would be cheaper to build and maintain throughout its life cycle.

Beriwal argued that the most important action needed to encourage residents to return to a region after a disaster is to repair the housing stock. She explained that although people understand that infrastructure takes time to repair, they will not return without a place to live, and coming back to a place that feels like home restores their emotional bond to the region they evacuated. Beriwal argued that public officials must bring housing back online quickly to maintain residents’ faith in the recovery effort and help them feel confident about returning to their community.

Rubin, who worked in New York State government during the aftermath of Sandy, and Barbour agreed that the centralized distribution of disaster recovery funds was an important reason why they were able to respond rapidly to their citizens’ needs after their respective storms. Rubin explained that unlike New York City, which appropriated resources through its normal budgetary processes, the state set up an independent disaster recovery department to administer its rebuilding efforts, which allowed it to circumvent many of the bureaucratic requirements that slow the flow of money to affected people and drives up costs. These efficiencies meant that New York State was able to serve those displaced by Hurricane Sandy on Long Island more rapidly than their colleagues in New York City.

Building Resiliently Before a Storm

In addition to advocating for flexible responses to disasters, the panelists emphasized the importance of creating systems that are proactively resilient to disasters. Gregory explained that people prepare poorly for disasters because they lack accurate information about risk, and even those who know the risk are overly optimistic about the odds that a catastrophe will affect them. To address the first issue, Dinan advocated more funding for creating accurate risk assessments. She and Beriwal noted that the flood maps that insurance providers use to assess risk to homes are often out of date and do not reflect conditions on the ground. These dated maps lead many people to decline needed flood insurance because they believe they are not in the path of a flood. Nationwide, in the past 3 years, says Beriwal, “the vast preponderance of people who were flooded did not have insurance.” Dinan explained that research conducted by the CBO found that although the federal government often will support victims of flooding even if they are uninsured, those victims could expect to recover only 20 percent of their lost assets. In contrast, those with flood insurance could expect to recover approximately 85 percent of their assets. Insurance, therefore, is a way not only to save government resources but also to provide better assistance to victims.

Even those who know their property is in a floodplain often do not accurately understand the risks or potential costs they face. Dinan argued that the way risk is presented often leads people to underestimate its true force. Dinan gave as an example the convention of the 100-year floodplain. Although this term means that the chance that a home is flooded in a given year is only a 1 percent, this translates into a 26 percent risk of flooding over the life of a 30-year mortgage loan. Assessing risk over a longer timeframe can encourage people to take it more seriously.

Gregory cited MIT research showing that hazard-resistant construction often is not significantly more expensive than traditional construction methods. In New Orleans, his team found that the payback period for resilient construction can be as short as 2 or 3 years because resilient construction is often only 10 percent more expensive than traditional methods. However, because builders do not pay for disaster recovery, they have little incentive to use these methods, and homeowners are often ill-informed about their true costs. Gregory stated that those involved in hazard mitigation should learn from behavioral science experts and change the culture of construction; rather than having consumers opt in to pay the premium for resilient construction, the resilient option should be the default choice, and consumers should have to choose to opt out of it. Dinan argued that this change, coupled with providing monetary incentives to homeowners (such as accounting for the long-term cost savings of prevention in the upfront cost of flood insurance), could go a long way toward changing people’s behavior and increasing the resiliency of the housing stock.

A Unified Response Before and After a Storm

The recovery efforts from recent major storms demonstrate the importance of flexible and quick responses not only to rebuild what was there but also to build new infrastructure that is stronger and better equipped to meet modern needs. Coupling a more resilient recovery with increased awareness of both the risk of a disaster and the financial benefits of preparing rather than rebuilding can reduce the burden on federal and state governments after a disaster strikes and protect lives and property from loss.