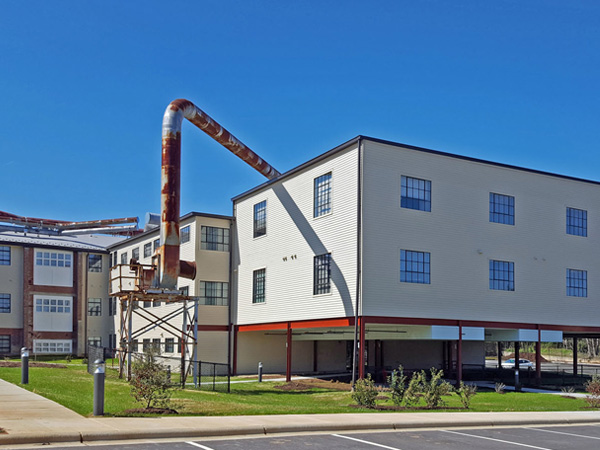 The city of Thomasville, North Carolina, is known for its history as a top manufacturer of high-end furniture for most of the 20th century. Thomasville Furniture Industries was a key manufacturer and a significant source of economic stability for Thomasville. The furniture industry supported 8,000 jobs in the city at the height of its success but declined in the 1990s, triggered by decreased furniture sales following a recession in the real estate market and competition from foreign manufacturers, which led to plant closings and abandoned mills.

In 2012, the city established a business district intended to revitalize the downtown area through commercial, industrial, and residential development while preserving and revitalizing historic landmarks, such as those left behind by Thomasville Furniture Industries. Thomasville’s home, Davidson County, also awarded tax incentive grants to investors redeveloping properties in the municipal service district to bring employment opportunities and commercial goods and services to the area. The plans of the developer, Third Wave Housing, to transform the former Thomasville Furniture Industries mill into Big Chair Lofts affordable housing fit within the city’s broader goals for the revitalization of its downtown. The property provides 139 workforce units (defined in this case as households making up to 60 percent of area median income) in close proximity to the downtown area. Big Chair Lofts is not only an economic benefit to the community but also a social and cultural asset through the creation of community partnerships and the preservation of a historic structure. 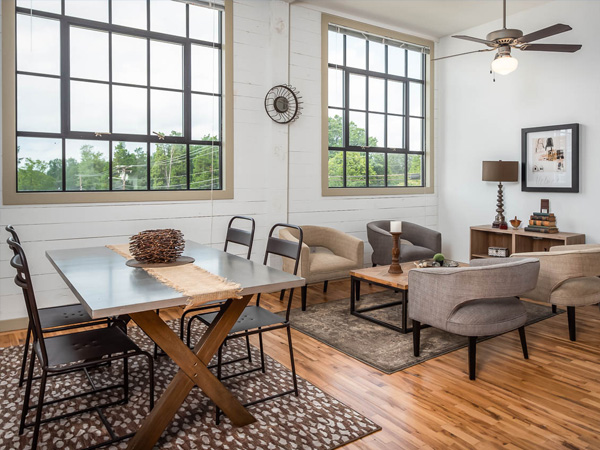 The units consist of 27 layouts that conform to the original mill structure, have sprawling ceilings and large bay windows that provide plenty of natural lighting. Credit: Photo courtesy of John Teague Photography

Until 2011, the mill was known as Thomasville Furniture Industries’ “Plant L.” Today, the structure is one-third of its original size after a series of owners tore down portions of the building, salvaging the wood for profit. After this period, the city spent 2 years on environmental studies with the intention of tearing down the property and constructing a police station. In 2015, Preservation North Carolina, an organization that acquires heritage buildings and finds buyers willing to rehabilitate them, connected with Richard Angino, the founder of Third Wave Housing, who partnered with developer Cohen-Esrey to transform the abandoned mill into affordable lofts. North Carolina’s approval process for the rehabilitation of historic landmarks typically applies to old brick mills, so Big Chair Lofts, as the first adaptive reuse of a building with a wooden structure in the state, faced challenges to approval. The lengthy approval process involved negotiations with federal officials because no standard existed for the preservation of a wooden mill.

The city decided to preserve the rare wooden mill, valuing a more diverse representation of historic building uses and construction that, according to Angino, is often lost. This decision has historic cultural implications for the preservation of rural structures that may not be as beautiful as brick structures but nevertheless represent an important part of their communities’ stories. Few wooden buildings remain in the area due to their vulnerability to demolition and fires, so the restored Big Chair Lofts has a complete sprinkler system. In addition to restoring the building’s structural beams and wooden floors, the contractors preserved a large water tower that now serves as a gazebo.

From Wooden Mill to Stylish Lofts

After an approval process that took approximately 3 years, Third Wave Housing and Cohen-Esrey contracted with Rehab Builders to rehabilitate the 160,000-square-foot building, which covers an entire block of downtown Thomasville, in about 16 months. The units are one- and two-bedroom apartment homes with 27 different layouts because their design had to conform to that of the mill itself. According to Angino, the more accessible, quieter, and smaller first-floor units with low-ceilings, exterior doors, and patios are well-suited for seniors. Units near the outdoor activity center, which is a covered playground area, are especially family friendly. Other amenities of the development include a media room, fitness room, a two-story community space, and a study hall. The study hall is available to children to do their homework, and schoolteachers and mentors are available to them. 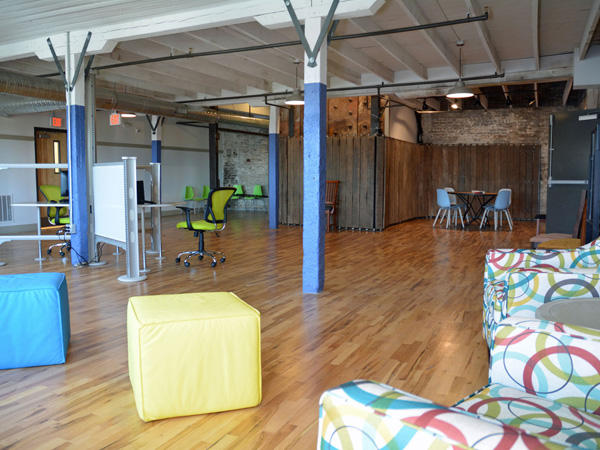 The study hall is a large open space where local teachers come after school to provide additional assistance and tutoring to children residing at the apartment complex. Credit: Photo courtesy of Richard Angino of Third Wave Housing

Renting at $550 per month for a one-bedroom unit and $650 per month for a two-bedroom unit, the lofts are stylish yet cost half as much as similar units in the nearby city of Winston-Salem, attracting a younger population seeking affordable housing. Big Chair Lofts serves Thomasville residents earning up to 60 percent of the area median income.

The city of Thomasville first supported the project by becoming the bond inducer, a requirement for the 4 percent low-income housing tax credits (LIHTCs) the project received. The project was financed by Citi Community Capital with Redstone Capital and Foss and Company as the tax credit purchasers. The city also waived impact fees, requesting only coverage of the legal fees. The project’s total cost was $22 million, of which $6.7 million was in the form of federal LIHTC sales, $3.5 million was in the form of federal historic tax credit sales, $5.5 million was from state mill credit sales, and $5.8 million was in tax-exempt bonds in the permanent phase. The $600,000 to $800,000 in saved transaction fees testifies to the city of Thomasville’s support of the project.

Community Interdependence and the Future

Revitalization of the historic downtown area requires many partnerships, and Big Chair Lofts has established itself as a key player not only in the local economy but also, through community partnerships, in the area’s cultural and social space. During the preconstruction phase, Third Wave Housing met with eight different community groups. Big Chair Lofts partnered with local schools and teachers who mentor and tutor students in the development’s study hall. The property provides overflow outdoor space and seating for the neighborhood farmers market.

Because of COVID-19 restrictions, some planned programs have not yet begun. The goal, however, is to offer more indoor programs, such as a summer program for 8- to 14-year-olds, once it is safe to do so.