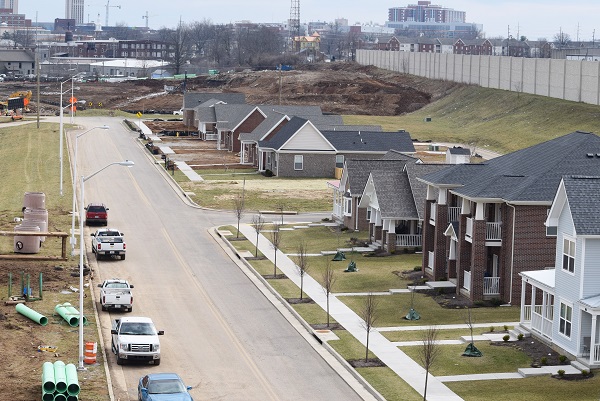 A much-anticipated street project in Lexington, known as the Newtown Pike Extension, led to the development of affordable housing in a traditionally low-income neighborhood. Credit: Maria Starck

The Newtown Pike Extension, a four-lane, 1.5-mile-long divided street with bike lanes and sidewalks, is being constructed in Lexington, Kentucky, in four phases with completion expected in the 2020s. The $97 million project, a joint effort by the Federal Highway Administration, the Kentucky Transportation Cabinet, and the Lexington-Fayette Urban County Government, will connect Lexington’s Main Street with the entrance to the University of Kentucky campus. The Newtown Pike Extension runs through 8 neighborhoods west of Lexington’s downtown, including Davis Bottom, a 25-acre, low-income, historically African-American neighborhood now known as Davis Park. Fearing the street project would destroy the neighborhood’s strong social network, residents opposed the extension for many years until the project’s partners agreed to a comprehensive community planning process as part of the environmental review of the project. Through this process, which began in the early 2000s, two important elements emerged to mitigate the loss of 50 residential and commercial buildings, years of construction activity, and other effects of the street project on Davis Park. One element was the preparation, with significant neighborhood participation, of the Southend Park Urban Village Plan for the redevelopment of a 25-acre section of Davis Park. The other element was the creation of the Lexington Community Land Trust (LCLT), with residents displaced by the road construction representing one-third of its board, to manage the redevelopment and related mitigation programs.

A Plan for Mitigation and Redevelopment

The street project’s financing comprises funds both for the design and construction of the street and for the mitigation of adverse impacts on the neighborhood’s social cohesion and quality of life. Mitigation actions include the acquisition of 25 acres for residential and nonresidential redevelopment consistent with the Southend Park Urban Village Plan. The redeveloped section of Davis Park will eventually include approximately 100 homeownership and rental units for households relocated because of the street project as well as low-income residents of Davis Park and elsewhere in Lexington. The plan also proposes the inclusion of commercial and mixed-use buildings as well as green space. The first phase of redevelopment, completed in January 2015, consists of 14 rental units in a mix of building types — 2 single-family, 2 duplex, and 2 fourplex buildings — for households earning less than 60 percent of the area median income. Financing for the first phase relies primarily on low-income housing tax credits and HOME Investment Partnerships Program funds. According to Barbara Navin, executive director of LCLT, the design of the rental homes reflects the local architecture, a desire that area residents articulated during community input sessions. The homes will face a rehabilitated green space, Southend Park, to be completed in 2017 or 2018. 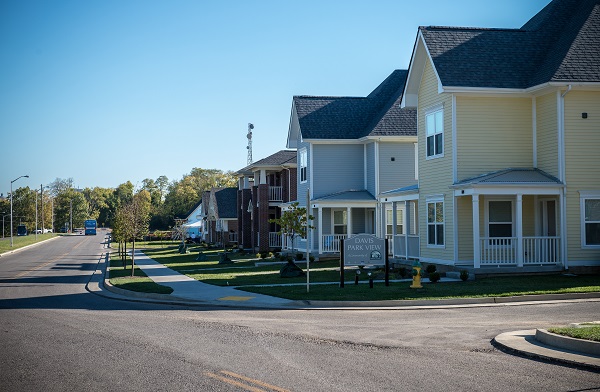 The redevelopment’s second phase will contain 16 single-family houses, 5 of which have been constructed as of March 2016. The remaining two phases will contain 26 homeownership townhouses, a multifamily apartment building, and a mixed-use building with a total of at least 100 affordable units. The mixed-use building will also include retail and office space with opportunities for local residents to benefit from economic development along the Newtown Pike Extension. An office complex is also planned for social service organizations that serve the neighborhood, including LCLT. These organizations are expected to provide services such as job training, case management, and legal assistance.

In addition, the redevelopment will include infrastructure improvements such as a noise abatement wall to mitigate sound from the adjacent railroad, removal of contaminated soil, and regrading to assist with stormwater management. Public green spaces, including a reconstructed park and a network of sidewalks and walking trails, will enhance community cohesion.

The street project’s financing also included $1.25 million to support LCLT’s operations for 10 years. According to Navin, this initial funding enables the land trust to bring about neighborhood redevelopment that serves local residents. LCLT is responsible for overseeing the entire redevelopment, providing social services, and selecting developers for each phase of the project. LCLT chose AU Associates to develop the first 14 rental units; the company pays a land lease fee to LCLT and eventually will turn ownership of the buildings over to the land trust. This arrangement will keep these units affordable in perpetuity, and LCLT will explore financing options to ensure long-term affordability for the redevelopment’s future rental units.

For the owner-occupied units, LCLT retains ownership of the land and uses a 99-year renewable lease with a formula that allows the homeowners to build equity in their houses. Homeowners can claim 25 percent of the increased property value when they sell, and LCLT’s continued ownership of the land acts as a subsidy for subsequent low-income buyers.

Consistent with the wishes of Davis Park residents, mitigating the adverse environmental and socioeconomic effects of the Newtown Pike Extension entailed redeveloping a portion of the neighborhood into a mixed-use community with permanently affordable housing. In addition to rental and homeownership opportunities, the first phase of the redevelopment has preserved the neighborhood’s physical and social identity, improved quality of life, and strengthened connections among Davis Park residents, adjacent neighborhoods, and nearby employment opportunities. LCLT and partners have converted a significant challenge into a responsive opportunity for Davis Park residents.