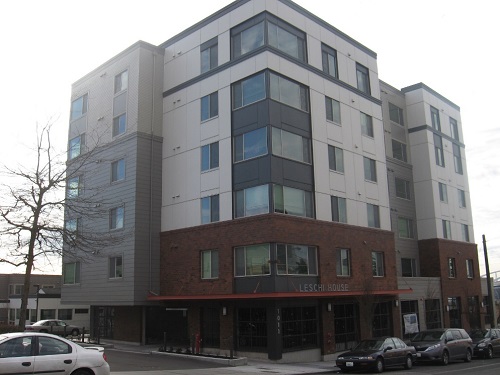 Leschi House, an affordable housing development in Seattle’s Chinatown-International District, opened in March 2015 after a full renovation and expansion. The owner of the property, Seattle Housing Authority (SHA), doubled the number of units while also improving energy efficiency and accessibility, furthering the property’s original goals of promoting independent living and building community for low-income seniors. Leschi House residents, most of whom are of Asian descent, can comfortably age in place, benefiting from the cultural opportunities in the predominantly Asian neighborhood and the walking and transit connections to Seattle’s other amenities.

SHA constructed Leschi House in 1987 as a 4-story, wood-framed building with 34 one- and two-bedroom apartments. After 25 years, Leschi House needed renovations; a leak in the building’s roof caused water damage that left a number of units uninhabitable. SHA officials began planning for renovations in 2011, the same year that the city rezoned the Chinatown-International District to allow greater density and taller buildings, explains Ann-Marie Lindboe, director of housing finance and asset management at SHA. This zoning change allowed SHA officials to add 35 one- and two-bedroom units in a new 5-story building that is attached to the renovated 34-unit building. Construction began in August 2013 and was phased to allow residents to move directly from their apartments to the new building before renovations of the original building began. 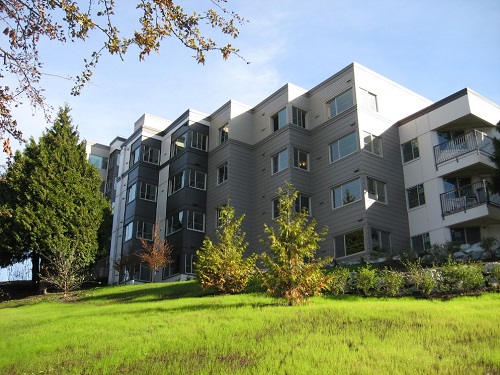 Residents can stay connected to their heritage because of Leschi House’s location in the Chinatown-International District. Credit: Seattle Housing Authority

To promote independent living, the renovation retained the original building’s accessibility features, including no-step entries and wide doorways and hallways, and updated the community room and community kitchen to meet Uniform Federal Accessibility Standards. The new building includes four units and common areas that comply with the Americans with Disabilities Act, as well as an additional elevator that serves residents of both buildings. To further support residents’ independence, SHA provides a case manager who helps create a sense of community among residents and connects them to services in the neighborhood and the city, such as Seattle’s Aging and Disability Services Office, Full Life Care, and Providence Health and Services.

The individual units received extensive interior work, including new flooring, cabinet fronts, countertops, appliances, and plumbing fixtures. The remodeling also included new windows and insulation that resulted in quieter apartments. New siding and stucco were added to the exterior to eliminate water damage to the walls. Also added as part of the renovation and new construction were landscaping, enhancements to the courtyard and community garden, and a camera and intercom system for resident safety. The two structures adhere to the Washington State Energy Code and meet the Evergreen Sustainable Development Standard to promote sustainable living and improve water and energy efficiency.

Leschi House’s location in the Chinatown-International District is particularly attractive to the building’s residents. Seniors can move about easily within the neighborhood and to other parts of the city; the neighborhood has a Walk Score® of 92, four bus routes, and a planned streetcar line. Also near Leschi House are three large parks, a grocery store, pharmacies, the International District Medical and Dental Clinic, and the International District/Chinatown Community Center. Lindboe notes that the neighborhood’s cultural institutions are also critically important for helping the buildings’ residents remain connected to their heritage. The Chinatown-International District is a melting pot for Chinese, Japanese, Korean, Vietnamese, Filipino, and Thai immigrants and their descendants. The neighborhood boasts numerous Asian grocery stores, restaurants, and events such as the Buddhist Bon Odori festival, the Chinese Moon festival, and the Asian Lunar New Year celebration. By doubling the number of affordable units, Leschi House allows more seniors from different cultural backgrounds to age in place in a community that fosters independent living and a connection to the their cultural roots.