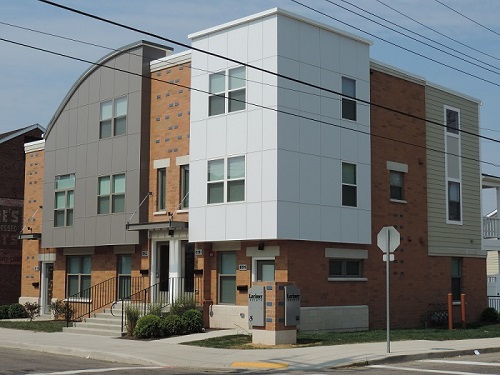 Larimer Pointe, 40 units of affordable rental housing in the Larimer neighborhood of Pittsburgh, is the first new construction in the area in over 50 years. Credit: KBK Enterprises

The neighborhoods of Larimer and East Liberty, located three miles east of Pittsburgh’s downtown, are in the midst of revitalization as a result of years of community activism leading to a Choice Neighborhoods implementation grant in 2014. The area has suffered from disinvestment and decline for decades — its population has fallen dramatically since 1950, more than 50 percent of its lots are vacant, and approximately one-half of residents had an annual household income of less than $15,000 in 2012. The neighborhoods have benefited from decades of extensive community-driven planning led in recent years by the Larimer Consensus Group. This neighborhood-based organization helped realize Larimer Pointe, an affordable rental housing development in a key section of Larimer. Completed in July 2014, Larimer Pointe was the first new construction in Larimer in more than 50 years. The catalytic development provided the community with important experience as it embarked on comprehensive redevelopment using its Choice Neighborhoods grant.

Larimer Pointe consists of 40 units of rental housing in 22 buildings of various types, including single-family houses, duplexes, and townhouses, and is it is affordable to households earning less than 50 percent of the area median income. The Urban Redevelopment Authority of Pittsburgh (URA), the city’s economic development agency, selected KBK Enterprises as the developer in 2012. KBK acquired 47 mostly tax-delinquent parcels from URA on and around Larimer Avenue. Neighborhood advocates had targeted properties along the avenue for revitalization because the avenue serves as the strongest connection to the thriving East Liberty commercial district, which, since the 1960s, has been separated from Larimer by a four-lane arterial street.

The site plan for the properties along Larimer Avenue changed several times to meet the wishes of the local community and URA preferences for vacant land use in the neighborhood, according to Jennifer DiNardo, KBK’s assistant vice president and project manager. DiNardo notes that her company received 700 applications for the 40 units, which remain fully leased as of May 2016. PNC Bank provided $10.8 million in low-income housing tax credit equity, and Federal Housing Administration and URA loans financed the remainder of the $13.5 million project. In addition, all of the units are subsidized with project-based vouchers.

Larimer Pointe incorporates strategies at the heart of the 2012 Larimer Vision-to-Action Plan, which became the basis of the Larimer/East Liberty Choice Neighborhoods implementation framework. In addition to providing affordable housing and concentrating residential development along key corridors, the plan creates a model green community. In fact, Larimer Pointe introduces sustainability components that earned the development certification in the Enterprise Green Communities program. All the units have qualified as ENERGY STAR® Version 3 Certified New Homes with water-saving fixtures, materials made with low volatile organic compounds, and energy-efficient lighting and heating and cooling equipment. To address historic flooding conditions in the neighborhood, the development’s stormwater management facilities include rain barrels, infiltration trenches, and bioswales. 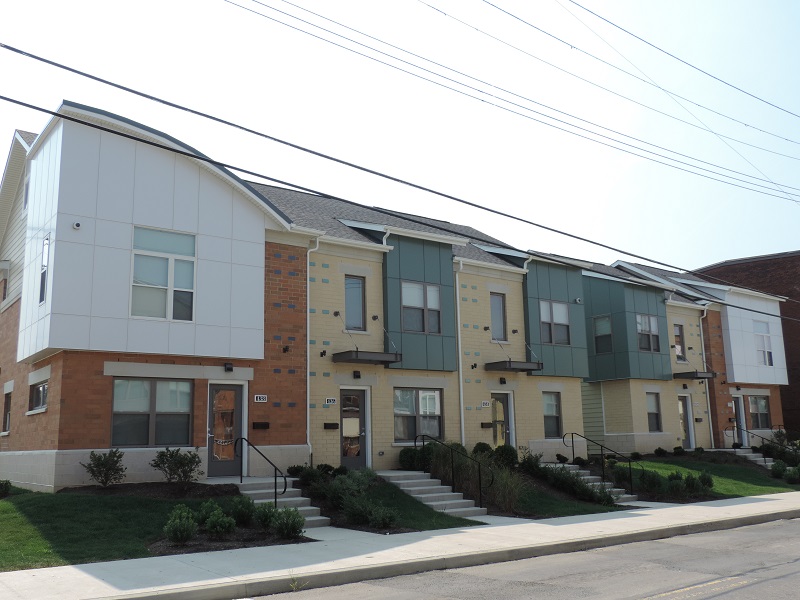 Larimer Pointe’s energy-efficient and environmental features align with the action plan’s strategies for the entire neighborhood. These strategies include providing existing homeowners with resources to renovate and “green” their buildings and developing an open-space network of green infrastructure, community gardens, and new parkland that connects with large green spaces at the neighborhood’s periphery. The Choice Neighborhoods implementation team is currently working with consultants to design and implement this network.

Constructing Larimer Pointe and successfully articulating the Vision-to-Action Plan required the community to engage in a planning process that has been ongoing since 1998. The Larimer Consensus Group, which was formed from a 2008 community plan, has broadened resident participation in neighborhood planning through a community-driven survey and action teams charged with implementing short-term activities. According to Carolyn Peeks, board chair of the Larimer Consensus Group, the organization has empowered the neighborhood as an active participant in ongoing redevelopment efforts. During the site planning process for Larimer Pointe, for example, the Larimer Consensus Group advocated the inclusion of green infrastructure elements consistent with the action plan. For Peeks, Larimer Pointe reaffirms the group’s approach, establishes the community’s identity as a sustainable neighborhood, and jump-starts the much-anticipated new housing.

The Housing Authority of the City of Pittsburgh, which is in charge of implementing the $30 million Choice Neighborhoods grant for Larimer, has secured approximately $150 million from other sources. As called for in the Vision-to-Action Plan, 334 new residential units will be developed by 2020, replacing 28 units of public housing at Hamilton-Larimer and 127 units of HUD-assisted housing at East Liberty Gardens. In addition to the one-for-one replacement of these assisted housing units, the new developments will include both market-rate units and units made affordable by low-income housing tax credits. Construction has begun on 85 units of mixed-income housing adjacent to a refurbished neighborhood park.

In addition to housing, the Choice Neighborhoods plan encompasses strategies to meet other neighborhood- and people-based needs in the community. These activities include promoting a green business and technology district in an industrial area of the Larimer neighborhood, stabilizing and supporting homeowners, and providing case management and job training supports to residents of the targeted public housing and HUD-assisted units. Although Larimer Pointe’s 40 units do not count toward the action plan’s goal of 334 new residential units, Jung-Wook Kim, senior development manager for the Housing Authority of the City of Pittsburgh, maintains that the community’s extensive involvement in the Larimer Pointe development prepared it to participate in the Choice Neighborhoods planning process in a meaningful way. Larimer Pointe’s energy-efficient, affordable apartments and links in the open-space network stand as an example of what Larimer can look like as the Choice Neighborhoods implementation continues.