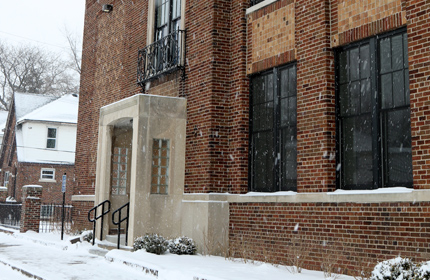 Opened in January 2022 after an adaptive reuse project to convert the historic school building to residential use, Transfiguration Place Apartments is a 19-unit affordable development in Detroit’s Banglatown neighborhood. The building, which was added to the National Register of Historic Places in 2019, served for decades as a Catholic school but had been vacant for some years until the Archdiocese of Detroit partnered with the city to transform the disused building into affordable housing. In 2017, the city selected Ethos Development Partners and Cinnaire Solutions to restore the historic building and modernize its systems. The $7.2 million development was funded through a combination of tax credits, funds from the city’s payment in lieu of taxes program, and other sources.

Transfiguration Place Apartments is a two-story, rectangular, flat-roofed building in multitone red brick accented with limestone. The building began its life in 1926 as the combination church and school of the Transfiguration Roman Catholic Church Parish — now the Saint John Paul II Parish, which maintains a campus of five buildings around the apartments. In 1950, the church moved to a purpose-built structure next door. Transfiguration School remained in the original structure until its closure in 2005, after which the parish leased the building to a charter school. The charter school, too, closed in 2014.

By 2017, Transfiguration School had been vacant for 3 years. The Archdiocese of Detroit, which wanted to put the disused property to use as affordable housing, partnered with the city to bring this vision to life. Banglatown, a neighborhood on the border of the city of Hamtramck, is one of Detroit’s most demographically diverse areas, with significant African-American, Bangladeshi, Bosnian, Polish, and Yemeni populations. Many residents are immigrants, and approximately two-thirds live at or below the federal poverty level.

The city of Detroit issued a request for proposals for the adaptive reuse project, and, in 2018, selected Ethos Development Partners, a developer specializing in affordable housing and adaptive reuse, and Cinnaire Solutions, a subsidiary of Cinnaire, a nonprofit community development financial institution, to take on the project. Ethos Development Partners handled most of the development functions, while Cinnaire Solutions acted as a tax-credit guarantor and a technical assistance provider; Cinnaire also coordinated the effort to add Transfiguration School to the National Register of Historic Places. The archdiocese ultimately sold the property to this development partnership for $250,000, and the developers began work on the 23,743-square-foot building in 2021.

Transfiguration Place Apartments opened in January 2022. The apartments — 17 one-bedroom and 2 two-bedroom units — are available to tenants earning no more than 50 percent of the area median income. In March 2022, this worked out to $28,000 annually for individuals (based on 2021’s income limits) and up to $40,000 annually for a household of four. All units are supported by project-based housing choice vouchers provided by the Detroit Housing Commission. 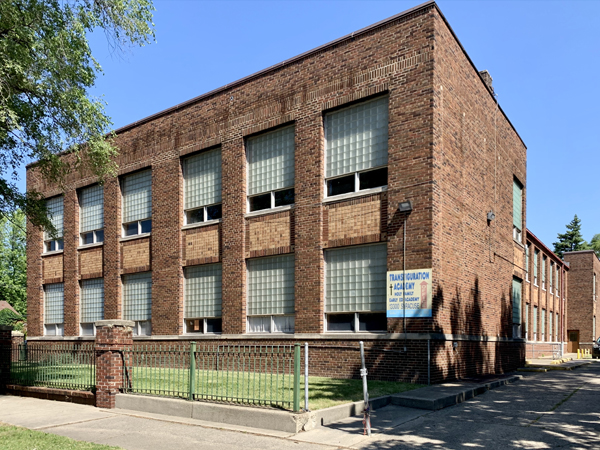 Joseph Heaphy, president of Ethos Development Partners, characterized the building as having been “remarkably well-kept” by the local parish despite its period of vacancy. Even so, the structure’s age — and the fact that it was not originally intended for residential use — meant that the adaptive reuse project was a substantial undertaking. The team replaced the building’s electrical systems; installed modern heating, ventilation, and air conditioning systems; and remediated the lead and asbestos present in the structure. The developers replaced the school’s original exterior windows, which were short, with each pair of windows topped with a span of glass block. To admit more light and reduce heat loss, the rehabilitation team replaced the windows and the glass block with large loft windows.

The developers converted the school’s classrooms into apartments, a process that Heaphy says was relatively straightforward after the building’s systems were updated to accommodate residential use. Although the apartment interiors are now largely modern in appearance, some units feature the school’s original wooden chalkboard frames, which are built into their walls to function as an attractive border. Hallways in the building retained some of the original classroom doors for decorative purposes, and to meet the standards of the National Park Service, the body that governs the National Register of Historic Places. The result is that, while unit interiors are contemporary, walking Transfiguration Place Apartments’ hallways feels like walking back in time: the building’s halls are wider than those of a typical apartment complex and feature child-sized drinking fountains as well as original interior-facing windows that once looked in on classrooms but now face interior walls for tenant privacy. “The halls make you feel very much like you’re in a school,” said Heaphy.

The redevelopment added a laundry room and a small community room on the first floor. No onsite parking exists at Transfiguration Place Apartments, although street parking is available immediately adjacent to the building, and the development offers bicycle racks.

A Tradition of Faith Communities

As of March 2022, Transfiguration Place Apartments is fully leased. Heaphy reports that Ethos Development Partners has partnered with Catholic Charities of Southeast Michigan to perform a similar adaptive reuse project to convert the former St. Matthew School in Detroit into 46 units of affordable housing. Faith communities like Transfiguration Parish frequently own unused properties in dense urban areas, because their congregations’ needs have changed over the decades. It is common for a parish to require less space or to no longer need a school, convent, orphanage, or other building. Projects utilizing these unused buildings are valuable because they simultaneously avert the problems associated with vacant buildings and contribute the benefits of affordable housing to the community.