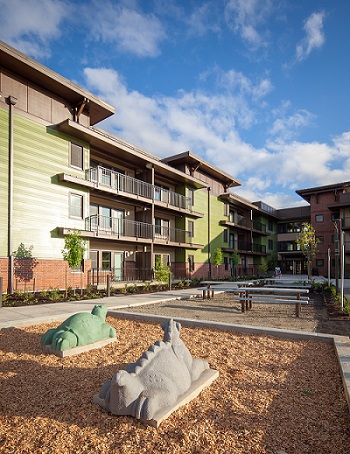 Located west of Portland, Oregon, in the city of Hillsboro, the new urbanist Orenco Station neighborhood embodies many of the region’s environmentally responsible urban planning policies. Designed in 1997 and featuring a pedestrian spine that connects the development’s commercial center with a station on TriMet’s MAX Light Rail Blue Line, Orenco Station provides walkable access to residences, employment, and recreation facilities. As the transit-oriented development has grown, housing prices have also risen; during the 12 months ending in the first quarter of 2014, regional housing prices rose 13 percent. Orenco Station’s residential development did not include affordable housing until REACH Community Development completed the first phase of Orchards at Orenco in June 2015. “Orenco’s access to high-quality employment and transportation makes it a very attractive community, and we thought affordable units should be a part of the community mix,” notes Ben Sturtz, housing development project manager at REACH. As North America’s largest multifamily building constructed to Passive House design standards, Orchards at Orenco helps bridge the affordability gap while supporting Orenco Station’s sustainability goals.

Orchards’ most important feature is its building design, which adheres to the Passive House standard. To comply with Orenco Station’s policies and the developer’s own interest in sustainability, REACH chose to use Passive House, a voluntary green building standard that is popular in Europe but has been used in few developments in the United States. The standard calls for decreasing total energy consumption by using energy-efficient appliances and heating and cooling systems. Passive House buildings also limit the amount of energy needed to control humidity, ventilation, and air quality by using specialized pumps to disperse air and adopting low-impact energy sources such as solar panels. Perhaps most important, the building must maintain an airtight “energy envelope,” which minimizes energy loss through uncontrolled ventilation. To create an airtight envelope, the building’s design needs to incorporate airtight doors, high-performance windows, and extra insulation. REACH designed the development’s first phase to achieve the highest possible rate of airtightness, with custom-made doors and separate buildings for amenities that need higher rates of ventilation, such as laundry rooms.

REACH also used the Passive House standard to lower energy costs for residents of the development. “[The first phase of Orchards at Orenco is] a high-quality building with exceptional durability, low operational costs, and superior indoor air quality,” says Dylan Lamar, energy consultant at Green Hammer, which advised REACH on Passive House design. Compared with conventional building design, a Passive House building can decrease energy use for heating by 90 percent and total energy use by 60 to 70 percent. Monitors in the building’s lobby track energy use in each apartment, encouraging residents to continue conserving energy. The decreased energy use lowers utility costs for residents and increases their units’ affordability; these energy savings effectively increase residents’ income by 1 to 2 percent, according to Sturtz.

The lobby of the first-phase building includes a screen showing residents’ energy use to encourage residents to decrease their utility costs and environmental footprint. Credit: Ankrom Moisan Architects and Casey Braunger

The first phase of Orchards at Orenco cost $14.6 million, with approximately $12 million paid through federal low-income housing tax credit equity and a loan from the Network for Affordable Housing, a statewide nonprofit organization, which used state affordable housing tax credits to lower the interest rate. The cost premium for meeting the Passive House standard was 11 percent, or approximately $17 per square foot of space within the energy envelope. Grants from the Energy Trust of Oregon and other partners helped offset that cost.

The Passive House standard presented several challenges for REACH’s development team. Hillsboro’s design regulations for street frontage, rear parking, and building articulation required the building to be L-shaped, which forced the team to take additional measures to use the solar panels efficiently and meet the Passive House standard. The development team will be able to design more simply shaped buildings for the future phases of Orchards and still comply with the city’s design regulations. Other design issues confronted during the first phase yielded lessons to be applied to the future buildings. According to Sturtz, one of the biggest problems was finding automated doors that maximize energy efficiency but also meet federal accessibility guidelines. REACH will not have to repeat the time-consuming search that located a manufacturer that could produce satisfactory doors. Another issue was providing adequate ventilation for the community laundry room while preserving the energy envelope. For the building to comply with Passive House’s highest criteria for airtight buildings, the architect placed the laundry room in an accessory building; the developer has decided to avoid this issue in future phases by achieving levels of airtightness that are less demanding but still meet Passive House’s standard.

REACH and the project architects will use their hard-won knowledge about Passive House design in the second and third phases of Orchards at Orenco. All of the future apartments in the approximately 150-unit development will comply fully with the Passive House standard, including energy-saving equipment, reduced energy use, and a tight energy envelope. Construction began in summer 2015 on the second phase, which will include 50 units targeted to households earning up to 50 percent of AMI and 8 units with project-based vouchers reserved for households earning less than 30 percent of AMI. With the third phase also comprising affordable apartments, REACH expects to complete the Orchards at Orenco by 2022.