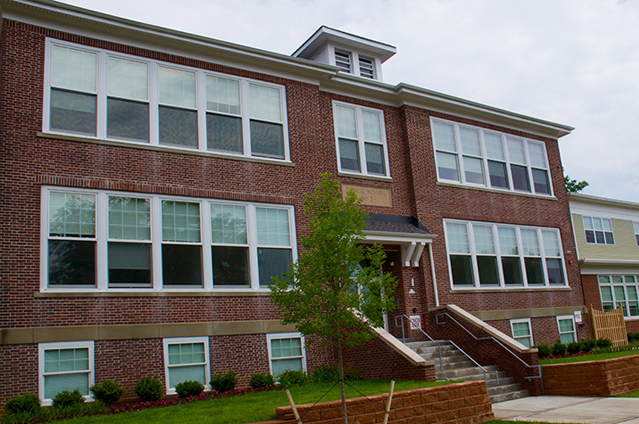 To implement Woodbridge Township’s 2012 Housing Plan Element and Fair Share Plan, the township council decided to build at least one affordable senior housing development in each of the community’s neighborhoods. More than 58 percent of Woodbridge households headed by seniors earn low to moderate incomes, highlighting the need for less expensive housing options. Further, the township government wanted to provide the elderly population opportunities to age in place. As Woodbridge mayor John McCormac observes, “We have a clear need in our town, as part of the aging population can no longer maintain a home but wants to stay close to friends and relatives.” One project, Reinhard Manor, completed in May 2015, provides 62 affordable apartments for seniors in the township’s Colonia neighborhood.

Reinhard Manor was developed on the site of a former school that the school district conveyed to the township in a land swap. The project included the renovation of the school building and the construction of an adjoining building. Developers Ingerman and BCM Affordable Housing transformed the school building into 29 apartments, a common room, and an office used for social services; student artwork that had been kept on classroom walls after the school closed are on display in the lobby located in renovated building. The new building contains 33 units. In total, the development offers 54 one-bedroom and 8 two-bedroom units for households headed by persons 55 years or older and earning no more than 60 percent of the area median income.

The project’s development cost was $16.5 million, substantially reduced through a $1 lease rather than market-rate purchase of the site. Reinhard Manor received $8 million in low-income housing tax credits through the New Jersey Housing and Mortgage Finance Agency. The agency also provided a $2.5 million mortgage and $4 million in Hurricane Sandy recovery funds awarded to Middlesex County.

The developers and architect designed Reinhard Manor with accessibility in mind, including services for seniors to age comfortably in place. An onsite case manager links residents with medical, legal, transportation, and other services as well as drug and alcohol counseling. The development is also located near shopping, restaurants, houses of worship, medical offices, and parks. Two bus stops and the Metropark train station are also close to development. Reinhard Manor provides transportation to these facilities and to service providers as well as coordinates group trips throughout the year. 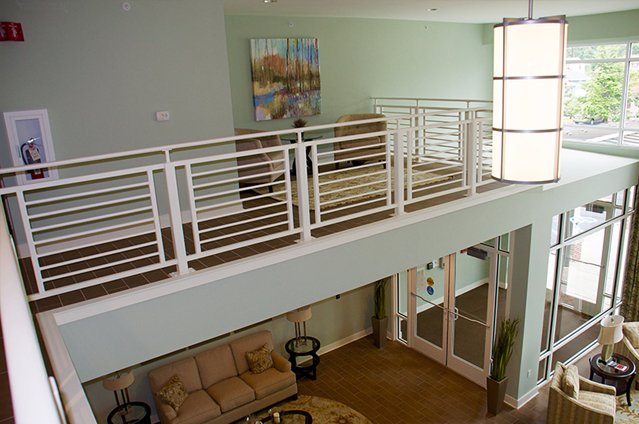 The architect designed an oasis for seniors that used much of the existing school interior, including metal railings and large windows. Credit: BAH Affordable Housing

While Reinhard Manor was being planned, its future neighbors voiced concern that the buildings would fundamentally change the neighborhood, driving down property values. The developers and mayor met in the homes of several nearby residents to explain the specifics of the development as well as discuss the added value of housing rather than an empty school. The team also held community meetings to explain the vision for the building and garner feedback. Bruce Morgan, president of BCM, says that these meetings were designed to assure neighborhood residents that Reinhard Manor was intended to help “their friends and neighbors” who live in poor-quality housing that does not meet their needs. This reassurance soothed neighborhood fears, and property values have risen since the development was completed, according to Morgan. To cement the development’s place as part of the community, the developers named the housing after U.S. Marine Corps Corporal Kevin Reinhard, a Woodbridge resident who was killed in Afghanistan.

Woodbridge Township’s focus on affordable housing responded to needs presented in its 2012 Housing Plan Element and Fair Share Plan. The township wrote the plan in compliance with New Jersey’s Mount Laurel doctrine, based on a 1983 New Jersey Supreme Court decision that requires all localities in the state to provide opportunities for their “fair share” of affordable housing. In 2016, Woodbridge Township met its goal for senior units required in the 2012 plan. Hundreds of Woodbridge seniors now have affordable options to age in place at Reinhard Manor and other developments recently built in the township. Woodridge updated its fair share plan in 2016 — the amended plan identifies a need for 1,562 additional affordable housing units, and the township has turned its attention to the next round of affordable housing development: units for families and persons with disabilities. Mayor McCormac indicated he will not shy from meeting this goal, saying, “Don’t be afraid of building affordable units. At the end of the day, it’s what residents want.”