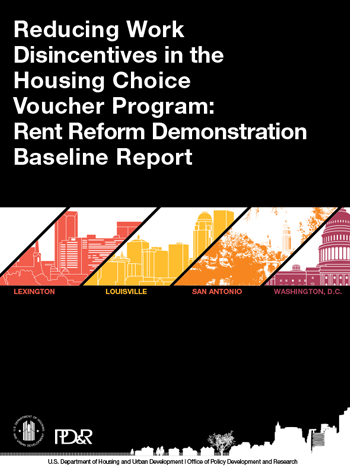 Some policymakers have expressed concern that public assistance programs discourage participants from seeking employment or increasing their earnings because a higher income might disqualify them from a program and its benefits. Some of these critics have argued that the Brooke Amendment, which limits an assisted household’s contribution toward rent at 30 percent of income, creates a disincentive for households in HUD-administered rental assistance programs to seek work or to increase their income. HUD is conducting the Rent Reform Demonstration, a randomized controlled trial, to test an alternative rent model intended to incentivize work without creating undue hardship or complexity for participating families or the public housing agencies (PHAs) that administer federal housing assistance programs. A recent HUD report, “Reducing Work Disincentives in the Housing Choice Voucher Program: Rent Reform Demonstration Baseline Report,” describes the baseline characteristics of the study sample population and the methodology of the Rent Reform Demonstration evaluation.

Under the traditional policy, participants in the Housing Choice Voucher (HCV) Program are expected to contribute a total tenant payment (TTP) of 30 percent of adjusted gross income (with some income exclusions) toward their rent. A government subsidy then makes up the difference between the TTP and the rent, which is capped by a payment standard based on an area’s fair market rent, as determined by HUD. Some PHAs have also established a minimum rent of $50 per month. The alternative rent policy being tested in the Rent Reform Demonstration aims to simplify rent setting to reduce costs and burdens, create incentives for families to raise their income, and minimize or reduce per-family subsidy expenditures while continuing to be a safety net for families that are unable to increase their earnings. The demonstration’s rent-setting policy includes extending the time for income recertification (the calculation of TTP) from 1 to 3 years; eliminating income deductions based on allowable exclusions, instead calculating TTP and subsidy amounts based on 28 percent of average gross monthly income over the past 12 months; simplifying utility allowance calculations; mandating a minimum TTP from $50 to $150 (depending on what each of the study PHAs could implement); excluding income from assets if the value of the assets is less than $25,000; limiting interim recertifications; and adding safeguards against high cost burdens. Researchers see the three-year period between income recertifications as the most significant change in terms of influencing family income. The new rent-setting policy will be evaluated with mixed methods to assess its implementation, effects, and costs. Researchers will measure outcomes through a randomized controlled trial, with households assigned to either the traditional rent-setting method or the new method.

Researchers are interested in the new policy’s effects on participants’ employment and earnings as well as their use of other benefits such as the Supplemental Nutrition Assistance Program (SNAP), Temporary Assistance for Needy Families (TANF), or their use of homeless services tracked in the Homeless Management Information Systems of the study jurisdictions. The demonstration will use qualitative methods to evaluate the experiences of PHAs implementing the new rules. Field researchers will observe and interview PHA staff and interview a small number of treatment group families at each PHA. In addition to assessing the ease of administering the new policies, the researchers will examine whether the new rules reduce the number of complicated income and subsidy calculations and the frequency of administrative interactions, such as interim recertifications for changes in income, that commonly occur for families and PHAs operating under the traditional rules. The evaluation will use administrative income and unemployment data to assess changes in employment and earnings, and administrative data from the PHAs to assess the cost-effectiveness of the new rent-setting policy. Four Moving to Work (MTW) PHAs are participating in the demonstration: the Lexington-Fayette Urban County Housing Authority in Lexington, Kentucky; the Louisville Metropolitan Housing Authority in Louisville, Kentucky; the San Antonio Housing Authority in San Antonio, Texas; and the District of Columbia Housing Authority.

The Study Sample and Early Implementation

Researchers identified 7,255 voucher holders among the four participating PHAs who were set for income reviews and recertifications and were likely to qualify for the demonstration. These families were randomly assigned to either the traditional rules group or the new rules group. After excluding ineligible families and 220 families that opted out of the demonstration in Louisville, KY, the final sample consists of 6,660 families. The study sample is similar to the national HCV population in age and family size but is less likely to have earned income, more likely to be female or have a black, Latino, or Hispanic head of household, and somewhat more likely to be disadvantaged. Although the baseline survey indicates that 47 percent of respondents are employed, and 24 percent have full-time employment, the survey responses indicate the study participants have a significant number of barriers to employment and an even higher prevalence of hardships experienced. Thirty-five percent have high school diplomas, and less than 3 percent hold four-year degrees. Fifty-four percent of the respondents cited problems that limited work including physical, mental, or emotional health (thirty-one percent) and difficulty affording child care (twenty-one percent). Almost seventy percent of survey respondents said that they had experienced one or more hardships in the last year. The most commonly reported hardships were: an inability to pay the cost of utilities (mentioned by forty-six percent of all respondents), telephone bills (thirty-four percent), food (twenty-eight percent), and not enough money to pay rent once in the past year (about twenty percent).

In terms of early implementation, the new rent rules are fully operational at the four study PHAs, but there were some challenges during implementation. Designing and implementing customized software changes, complying with study requirements and enrollment timelines, and determining and verifying retrospective income, all while administering the regular HCV program, were particularly challenging. PHAs calculated the initial TTP for participants at their annual recertification in accordance with either according the demonstration new rent-setting rules or the traditional rules based on the participants’ random assignment to either the treatment or the control group. The average TTP for families in the new rent rules group was $20 less than that of the traditional rules group, which corresponded with a higher average subsidy for the new rules group. The decreases in the new rent rules group were higher for those families that had some earned income. The lowest income families in the treatment group had the highest rent increases because of the minimum TTP requirement. Nearly 18 percent of families in the new rent rules group had TTPs that were higher than the 40 percent of income threshold, largely due to the minimum TTPs that applied to those families. Interestingly, the researchers report that less than 1 percent of families that could qualify for hardship remedies — those with TTPs higher than 40 percent of income — had done so. This finding suggests that families might not be aware of or remember the hardship policies, may not think that they would qualify, or may wish not to engage housing officials. In response to the low take-up of the hardship remedy during the early implementation phase of the demonstration, PHAs mailed flyers to remind participants that hardship provisions were available. Future reports will analyze if this more intensive effort increased usage of the hardship remedy.

The findings of this baseline study regarding the characteristics of the study sample compared with the national population will help put the ongoing evaluation of the demonstration in context. The randomized controlled trial will provide a rigorous assessment of the effects of the demonstration’s rent-setting rules that can inform future HUD and PHA policies. Future reports will address PHA implementation; the administrative costs and burdens of the new rental policy; and the new policy’s effects on participants’ employment, earnings, and use of government rental subsidies and other benefits.