Measuring Discrimination in Rental Housing Among Individuals With Mental Disabilities 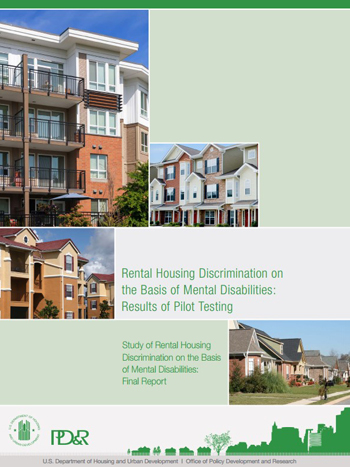 The U.S. Census Bureau’s Survey of Income and Program Participation indicates that among Americans aged 15 and older, 15.2 million people had challenges with cognitive, mental, or emotional functioning in 2010. Although the Fair Housing Act prohibits housing discrimination based on disability, people with disabilities nevertheless face discrimination because of inaccessible housing, landlord assumptions that they are incapable of living independently, and the refusal of housing staff to reasonably accommodate their needs. Limited research exists on housing discrimination as it relates to those with mental disability (MD) and its two subcategories: mental illness (MI) and intellectual or developmental disability (I/DD).

HUD’s Rental Housing Discrimination on the Basis of Mental Disabilities: Results of Pilot Testing represents the first comprehensive examination of discrimination in the rental housing market against people with mental disabilities, specifically focusing on people with mental illness (MI) and those with intellectual and developmental disabilities (I/DD). The goal of the study was to increase the understanding of the forms and prevalence of housing discrimination against this community as its members seek market rental housing, and to pilot test various methods for testing for hosuing discrimination on the basis of mental disability. Throughout the course of the study, researchers conducted matched-pair testing in nine rental markets over the course of 18 months in 2013 and 2014 to determine the degree of discrimination experienced by those with MD in housing searches on the private rental market. Matched-pair testing is an investigative technique that serves as a powerful tool for directly observing differences in treatment in the practices of housing providers and their agents. In total, the researchers conducted tests in two very large housing markets (2.5 million or more people), two large markets (1.25 million to 2.5 million people), and five medium markets (500,000 to 1.25 million people). The researchers divided testers into two groups: protected testers, who had MD (either MI or I/DD) or proxied for someone with MD, and control testers without MD. Each pair of protected and control testers were matched on a range of characteristics (racial background, gender, age range, educational attainment, employment status, household size, and income level) except for the one characteristic of inquiry: the presence of a particular MD.

The testing sought to examine differences in testers’ treatment across three modes of contact with housing providers: email, telephone, and in-person. These modes generally represent the primary ways people, including individuals with MI and I/DD, might seek rental housing. For the e-mail testing component, the research team wrote messages for both the protected tester and the control tester that were identical except that the e-mail message from the tester with a mental disability disclosed that the individual interested in the unit had MD. During the telephone testing, proxy testers posing as a friend or family member of the potential renter contacted housing providers on behalf of someone with MD in search of housing. The final mode of testing was conducted in-person. Testers with mental disabilities (both MI and I/DD) were accompanied to a rental housing unit by someone without a mental disability posing as a friend, and control testers were people without mental disabilities and were unaccompanied.

Researchers administered a total of 359 paired e-mail tests, and in 25.35 percent of the tests, both protected and control testers received a response. In general, the housing providers favored those without MD in their responses to e-mail inquiries. Regardless of the nature of the housing providers’ response, the researchers deemed a response (as opposed to no response) to an inquiry as favorable. Among 9.19 percent of the tests, only the protected testers received a response, and for 17.55 percent of the tests only the control testers received a response. 78 of the paired tests included a request for reasonable accommodation, such as rent reminders and therapy animals, and 39 housing providers (50%) responded, but only about 15 percent granted the requests. Thus, most e-mail requests for reasonable accommodation for people with MD were denied.

Of the 668 telephone tests in the 9 rental markets, 629 included a request for a reasonable accommodation, and 59 percent of housing providers responded affirmatively to this request. Even though the remaining 41 percent of providers did not offer affirmative responses, housing providers did seem to be more open to discussing reasonable accommodations over the phone than by e-mail. The researchers also uncovered significant differences in treatment based on the type of disability. In telephone tests with proxies representing MI (357) and I/DD (311), only 14 percent and 19 percent, respectively, were invited to view the advertised unit. Both MI and I/DD renters were more likely to be steered toward a different unit even when the advertised unit was still available, particularly when testers with MD indicated that they had previously lived in an institutional setting. The results point to a tendency to segregate people with disabilities in separate buildings or areas.

A total of 101 in-person matched-pair tests were conducted in two large rental markets. The results demonstrated that people with mental disabilities (both MI and I/DD) were significantly less likely than people without disabilities to be told that the advertised unit was available and were less likely to be given a valid reason for why the unit was not available. Additional differences by living situation, race and gender were also found to be significant in in-person testing. Housing providers favored women without MI over women with MI, and preferred African-American renters without MI over African-Americans with MI. Finally, researchers also determined that testers with MI who identified as living in a nursing home or institution prior to renting (Olmstead group) were less likely to be told an advertised unit was available than testers who reported living previously in a non-institutional setting.

This pilot testing effort represents the largest comprehensive effort to validate methods of testing for housing discrimination against people with mental disabilities. The pilot testing also represents the first time that people with MI and I/DD have been enlisted to serve as in-person testers in a housing discrimination study of this size, and therefore contributes significantly to the knowledge about disability-related housing discrimination, as well as the design of research methodologies that are accessible, inclusive, and participatory to people with MI and I/DD. The testing conducted in this study documented significant levels of adverse differential treatment toward individuals with MD when compared to the treatment of a control group of individuals who did not have MD, particularly in the areas of adverse differential treatment and requests for reasonable accommodations.

A secondary purpose of this study was to evaluate the strengths and weaknesses of each approach to conducting matched-pair testing in order to establish a set of protocols for scaling up such a paired testing effort in the future. The researchers determined that each mode of testing that was piloted had several strengths and weaknesses. E-mail testing was found to be the most cost-effective and time-efficient means to contact hosing providers. Furthermore, because test administrators sent the e-mails, there was no tester fatigue, and the researchers had the benefit of gathering the exact language used by housing providers in their responses. However, e-mail testing eliminated direct interaction with housing providers, resulting in a lower response rate that therefore required a larger sample size. Telephone testing generated a high volume of tests for analysis in a relatively short period of time, and was used successfully to produce useful data. The lack of a face-to-face encounter, however, meant that testers could not pick up on providers’ body language and other nonverbal cues. Face-to-face interaction with a housing provider captures richer, most realistic interaction information than is possible through the other two testing methods that were piloted, including verbal and nonverbal responses of housing providers when responding to a housing inquiry, but in-person testing is also more costly, more logistically challenging, and requires a significantly longer period of time for data collection.

Findings from this project, while important in documenting how housing discrimination may occur against people with MI and I/DD as they seek rental housing, are limited given the small sample sizes, particularly when attempting analyses on variations of treatment between subcategories of paired tests, such as gender, race, type of disability, and geography. The results of the pilot testing efforts suggests that it would be possible to scale-up a testing effort to produce a national estimate of housing discrimination on the basis of mental disability. The detection of significant level of discrimination in the rental housing market against persons with mental disabilities suggests that such a research effort would be instructive at better understanding the scope and scale of this issue. Future research is advised using testers with mental disabilities to gain a more nuanced understanding of housing discriminations faced by this population. The in-person testing component of the study demonstrates that involving persons with mental disabilities can serve as effective testers when the proper training and supports are provided.