A Health Picture of HUD-Assisted Children 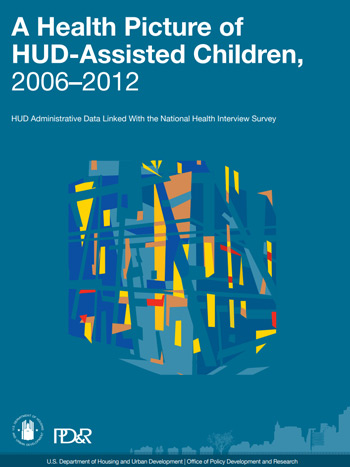 Although multiple data sources were linked by HUD and NCHS, this study only utilized 2006-2012 data from the National Health Interview Survey.

The study analyzed individual health characteristics among the three aforementioned child population groups. The NHIS asks a knowledgeable adult to rate the health of each child on a 5-point scale: excellent, very good, good, fair, or poor. The distribution of health status varied across the three groups. Among the general population, 2.4 percent of respondents ranked the health of their children as fair or poor compared with 5.2 percent of children in HUD-assisted housing and 6.1 percent of unassisted low-income children.

The NHIS also includes information about emergency room (ER) visits, which can indicate chronic health emergencies as well as a lack of access to primary care physicians and other forms of preventative care. Among HUD-assisted households, 14.2 percent of children had two or more ER visits in the past 12 months; among unassisted low-income renters, 15.7 percent had been to the ER twice or more in the past 12 months. Children in the general population had fewer ER visits, with only 8.5 percent of these children visiting the ER at least twice in the previous 12 months.

The NHIS collects indicators relevant to understanding school performance among children aged 6 to 17. HUD-assisted children reported missing more school days due to injury or illness than children in the general population. Among HUD-assisted children, 16.2 percent missed between 6 and 10 days of school, with an additional 8.5 percent missing 11 or more days. Among the general population, 12.2 percent of children missed between 6 and 10 days, and an additional 6.3 percent missed 11 days or more.

Healthcare costs can limit access to treatment. The NHIS indicates that among HUD-assisted children, 10.9 percent have unmet healthcare needs because of their cost compared with 12.1 percent of children in unassisted low-income renter households and 10.5 percent of the general child population.

The research represents the first nationally representative estimates regarding health outcomes and access to health care among HUD-assisted children. Overall, the research suggests that the health status of children of HUD-assisted and low-income renters is worse than that of children in the general population even though these groups have greater access to health care as evidenced by public health insurance coverage and healthcare utilization.

Moving forward, the potential linkage of health and housing policy could improve cost effectiveness and outcomes for program participants — particularly among children, for whom better coordination of healthcare services at a young age could bring substantial benefits to individual, community, and population health.