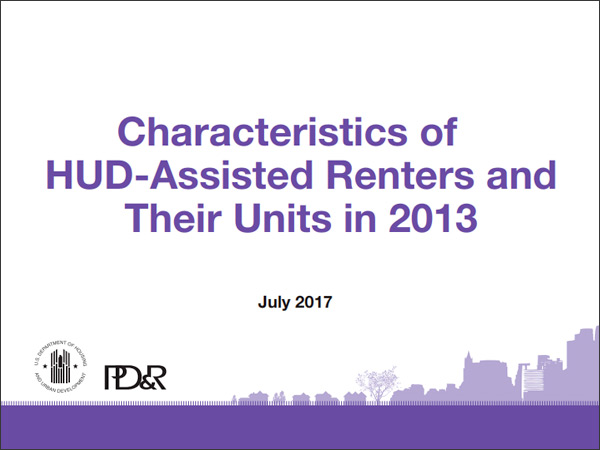 A new study sponsored by HUD’s Office of Policy Development and Research provides information on the characteristics of the households living in HUD-assisted housing, including public housing residents, residents of project-based voucher units, and housing choice voucher tenants. The report is the sixth in a series of reports that details the size, composition, and quality of the HUD-assisted housing stock.

In “Characteristics of HUD-Assisted Renters and Their Units in 2013,” researchers use data from the American Housing Survey to develop a representative sample of households participating in HUD’s various housing programs and analyze how these households compare with households that are eligible for HUD’s housing assistance programs but are not currently in assisted housing. Overall, the study is consistent with past research findings.

The Section 8 Housing Choice Voucher program provides eligible households with a voucher that is used to rent privately owned housing. As with the public housing program, tenants pay 30 percent of their income toward rent, and the voucher is used to pay the remaining cost to the landlord. Although the public housing program is considered a project-based program because the assistance is tied to a project, the Section 8 program is considered a tenant-based program because households can use their vouchers to reside in the unit of their choosing, provided that the landlord will accept the voucher.

Source: “Characteristics of HUD-Assisted Renters and Their Units in 2013,” 9. Totals may not add to 100 percent due to rounding.

The report builds on previous research and is consistent with broader trends in HUD-assisted housing. It shows that HUD’s assisted housing programs are targeting the lowest income households and support the availability of affordable housing. The data also show a trend toward increased participation in the Housing Choice Voucher program and decreased participation in project-based assistance programs.