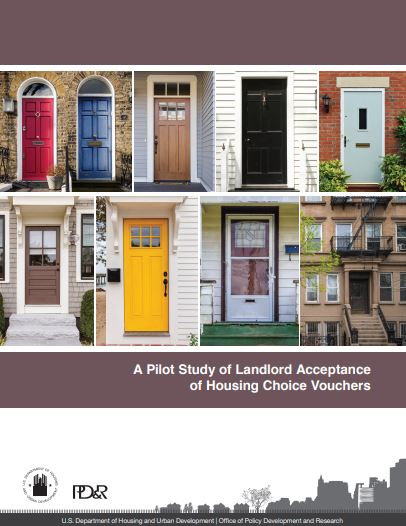 With approximately 2.3 million enrolled households, the Housing Choice Voucher (HCV) program is the largest of HUD’s rental assistance programs. Administered locally though public housing agencies (PHAs) nationwide, the program provides rental subsidies on behalf of tenants, allowing them to secure housing in the private rental market. HUD funds and regulates the program, and PHAs are responsible for processing applicants, maintaining wait lists, calculating tenant and housing assistance payments, and determining whether a unit meets housing quality standards, among other responsibilities. Because the program relies on the private rental market to supply units for HCV tenants, landlord participation is critical to its success. And although some states and local governments have made it illegal for landlords to refuse to rent to voucher holders, no federal law prevents housing discrimination based on a tenant’s source of income even though many voucher holders are members of classes protected under the Fair Housing Act.

New research from HUD’s Office of Policy Development and Research examines the degree to which landlords’ treatment of voucher holders differs from that of nonsubsidized tenants. Using data collected across five market areas, the researchers applied a rigorous research design to investigate the prevalence of housing discrimination among tenants who use a voucher. The researchers’ goals were to “(1) identify testing methodologies for measuring the differential treatment of renters who use vouchers; (2) identify the types and patterns of housing discrimination against voucher holders; and (3) measure the prevalence and extent of voucher-related discrimination, including differences in discrimination against racial and ethnic minorities and differences between low- and high-poverty neighborhoods.”

The HCV program is designed to expand housing opportunities for some of the nation’s lowest-income individuals and families, with an emphasis on helping these families choose safe neighborhoods with access to high-quality services. The demand for vouchers and other housing assistance vastly outweighs the supply, with approximately 21 percent of the 22 million eligible households receiving assistance. Because vouchers are portable, households can use them to move to any privately owned rental unit that meets program standards and has a landlord willing to participate in the program. As a result, landlord participation is critical in determining the housing choices available to program participants.

To complete the study, the researchers conducted voucher tests across neighborhoods in several sites, roughly in proportion to the prevalence of rental housing units that were priced at levels affordable to voucher holders, in three stages. The first stage was done in five metropolitan areas (Fort Worth, Texas; Los Angeles, California; Newark, New Jersey; Philadelphia, Pennsylvania; and Washington, DC), during which female testers who would be perceived as white called landlords of advertised rental units and asked whether they accepted vouchers. If the landlord accepted vouchers, the research moved on to a second phase in which paired testers, matched on all characteristics (including race and ethnicity) except for whether they had a voucher, contacted landlords to determine whether they were told about available apartments and were provided appointments to view units. If both testers were able to secure appointments, the researchers moved to a third phase, which determined whether voucher holders were able to meet with a landlord and view apartments. The reports test results from the second and third phases for three of the study areas (Fort Worth, Los Angeles, and Newark). However, because a large proportion of paired telephone tests in Fort Worth and Los Angeles did not lead to in-person meetings with landlords, only Newark’s test results were reported for stages two and three.

The research highlights the challenges for voucher households trying to secure apartments. The first phase of the research, which focused on voucher acceptance, suggests that a significant proportion of landlords do not accept vouchers, although the acceptance rate varies widely across the five study areas. Fort Worth, Los Angeles, and Philadelphia had the highest rates of voucher denial, at 78 percent, 76 percent, and 67 percent, respectively. The incidence of voucher denial was much lower in Newark (31 percent) and Washington (15 percent). Localities with protections against source of income discrimination, including Newark and Washington, had much lower rates of voucher denial compared with Forth Worth and Los Angeles (Philadelphia has a source of income protection, but neighboring Bucks County does not). Although these results suggest that source of income protections help voucher households, housing market conditions, PHA performance, and other variables may also influence landlord decisionmaking.

The research suggests that landlords who accepted vouchers treated voucher households similarly to peers without a voucher. In Newark, where 426 paired phone call tests were completed, 96 percent of voucher households who were able to speak with a landlord were told about one or more available units. There was slight difference in the number of available units voucher holders were informed about compared with those without vouchers. On average, voucher holders were told of 1.1 housing units, whereas those without vouchers were told of 1.2 available housing units.