Lessons From the Worst Case Housing Needs: 2017 Report to Congress 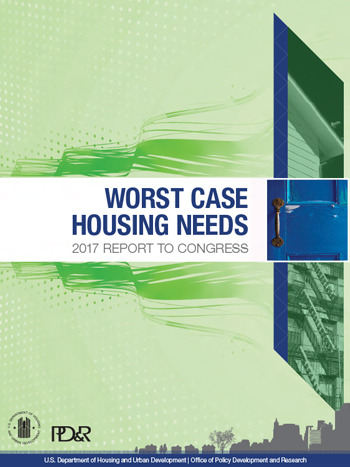 Of the 582,000 new cases of worst case needs over the 2-year period, most (563,000) are attributable to a shift away from homeownership to renting. As the homeownership rate declined, the number of renter households increased by approximately 9 percent. In an increasingly competitive market, rents increased between 2013 and 2015 and the supply of rental housing stock affordable for very low-income renters shrank by over 1 million units. This affordable unit competition, representing the extent to which the market responded to increased demand, accounts for an additional 180,000 new cases of worst case needs. Despite more than 10 percent increase in the total supply of rental units, the affordable rental housing market remained tight with a vacancy rate of less than 4 percent, with many higher-income renters occupying units that would be affordable to those with lower incomes. Growth in household formation and the gap in rental assistance relative to need also added to the number of households susceptible to worst case needs between 2013 and 2015, accounting for an additional 154,000 and 89,000 new worst case needs cases, respectively. . Rising incomes, however, was found to have a mitigating effect on worst case needs by lifting some renters out of the very low-income category, offsetting growth in worst case needs by about 404,000 cases. Still, for the average renter, income increases were nearly matched by a nearly 9 percent rise in median monthly housing costs.

Worst case needs vary by household type, racial and ethnic group, and geographic area. This report’s findings call for a multifaceted strategy at the federal, state, and local levels to boost the economy, improve the housing market, and make housing assistance more readily available to the most vulnerable.