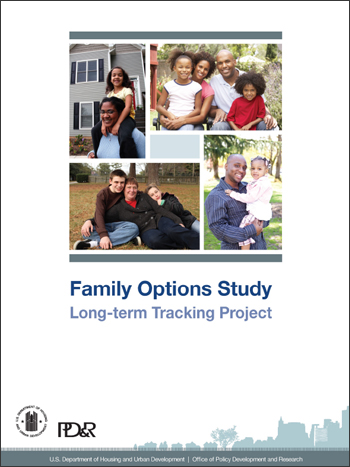 Launched in 2008, the HUD-funded Family Options Study, the largest experimental study of its kind, was designed to evaluate the effects of different housing and service interventions — long-term housing subsidy, community-based rapid rehousing, project-based transitional housing, and usual care — on families experiencing homelessness. A recent report, Family Options Study: Long-term Tracking Project, documents the research team’s efforts to reconnect with the study families for the first time since 2014. The overarching purpose of the long-term tracking project was to determine the viability of the Family Options Study sample for future in-depth data collection. In addition, the long-term tracking project collected current contact information for heads of households; administered informed consent in an effort to expand the consent-to use Personally Identifying Information (PII) file; and updated the study’s database with information about participants’ current housing, program use, experiences with homelessness, employment, and family composition. The researchers successfully interviewed, located, or determined up-to-date contact information for 75 percent of the original sample, a strong indication that future longitudinal studies will have sufficient response rates.

The 2,282 families who enrolled in the Family Options Study from September 2010 through January 2012 came from 12 communities and had spent at least 7 days in an emergency shelter. Researchers randomly assigned the families to one of four groups: those receiving a long-term housing subsidy, typically a housing choice voucher; those receiving an 18-month temporary housing subsidy in the form of community-based rapid rehousing assistance; those receiving a 24-month stay in a project-based transitional housing program; and those receiving usual care homeless and housing assistance without priority access to any particular program. After random assignment, the research team maintained regular contact with the families every three months through telephone calls, letters, and passive tracking activities. In addition, the study team conducted brief tracking surveys at 6, 12, and 27 months after random assignment to remind participants about the study and update contact, housing, employment, and family composition information, and in-depth surveys were administered 20 and 37 months after random assignment.

Under the Long-Term Tracking Project, between October 2017 to March 2018, Abt Associates tracked participants to locate and interview the Family Options Study sample. After enrollment and random assignment, the median response time for the long-term tracking data collection was 78 months. At the start of the tracking effort, 18 heads of household out of the 2,282 families enrolled were confirmed deceased, leaving 2,264 families eligible for the 78-month survey. Researchers mailed reengagement letters to 2,166 families who had complete addresses and a living head of household. The reengagement letter included updates on the study; explained the long-term tracking survey; and asked respondents to update their contact information online, by mail, or by phone. Only 4.2 percent of the study sample updated their contact information in response to the reengagement letter.

At the end of the 78-month data collection period, the team classified participants into one of 4 groups ― completed, located, viable, or unlocatable ― to assess the feasibility of locating them again. In total, the researchers interviewed, located, or deemed viable 75 percent of the total sample size of 2,264 families. Out of the sample, 48.7 percent of families successfully completed interviews. About 10 percent of the sample was located, but researchers were unable to interview these families due to language barriers; refusal to participate; or the head of household being reported as deceased, incarcerated, ill, or otherwise unavailable. With 15.7 percent of the sample deemed viable, researchers felt confident that they had the respondents’ correct address, phone number, email address, or secondary contact information despite being unable to make direct contact. Although researchers deemed 25 percent of the sample unlocatable because of outdated contact information, they support keeping those families in future data collection efforts in hopes of eventually reconnecting with them.

The research team sought a high response rate by conducting the 78-month survey primarily by telephone, but it should be noted that the survey administration period was significantly shorter than the survey administration period during prior rounds of data collection (5.5 months versus 12 to 18 months). Respondents in the long-term housing subsidy group had the highest response rate, with 55.1 percent successfully completing interviews. The lowest response rate was among respondents assigned to the project-based transitional housing group, with 44.5 percent completing interviews. The researchers found an even distribution across intervention groups for locating efforts, and determined that 74.1 percent of the community-based rapid rehousing group, 72 percent of the project-based transitional housing group, 80.8 percent of the long-term subsidy group, and 72.6 percent of the usual care group were viable for long-term followup. In total, 92.8 percent of respondents to the 78-month survey also participated in the 20-month survey, and 95 percent and 89.5 percent participated in the 37-month survey and both the 20- and 37-month surveys, respectively. Researchers examined the response rate over time among the different intervention groups. Respondents to the 78-month survey in the long-term subsidy group had the highest proportion (93.1%) of respondents to both the 20- and 37-month followup surveys, whereas the usual care group had the lowest proportion (88%) of respondents to both.

Because researchers did not create nonresponse weights for the 78-month survey to represent the entire study sample, the descriptive data of the 78-month survey cannot be compared with the baseline characteristics and 20- and 37-month followup characteristics of the full study sample or with the characteristics of the full usual care group. However, the long-term tracking survey still provides important descriptive data about households’ experiences with homelessness and housing assistance since random assignment. The data revealed that 11.5 percent of the 78-month respondents reported experiencing homelessness for at least 1 night during the 6 months before the start of 78-month data collection round. During this same time frame, 15.3 percent indicated that they doubled up for at least one night, and 19.5 percent indicated that they either experienced homelessness or doubled up for at least one night. From December 2013 to March 2019, among those assigned to the long-term subsidy group, the proportion of families that reported receiving housing assistance declined by 20 percentage points, but for the other intervention groups, the proportion of families receiving housing assistance increased during the same period. For example, from December 2013 to March 2019, the proportion of households in the community-based rapid rehousing intervention group receiving housing assistance increased from 19 to 25 percent. The project-based transitional housing and usual care groups also witnessed similar upward trends in housing assistance.

The long-term tracking project determined that the Family Options Study sample is viable for a future study. The research team is confident that with more resources, future interviews with up to 75 percent of the Family Options Study sample could be possible. The 78-month survey data yielded results useful for descriptive analysis, particularly for examining changes since random assignment. Whether the data can be used to conduct a robust longitudinal impact analysis remains unclear, however, because the data on the families who completed the survey are not weighted to represent the entire study sample, which then could be compared with sample outcomes from previous study periods. An impact analysis would be contingent upon examining household characteristics, creating nonresponse bias weights, and determining how the baseline characteristics for the 20- and 37-month samples match with the weighted 78-month sample. A future followup survey could provide more information on outcomes such as homelessness and doubling up, housing quality, family separations and reunifications, adult and child well-being, employment and income, and food security. The findings from this study demonstrate the possibility for continued engagement with study families to further understand the long-term effects of different housing interventions on mitigating homelessness.