The Role of Downpayment as a Mortgage Risk Deterrent 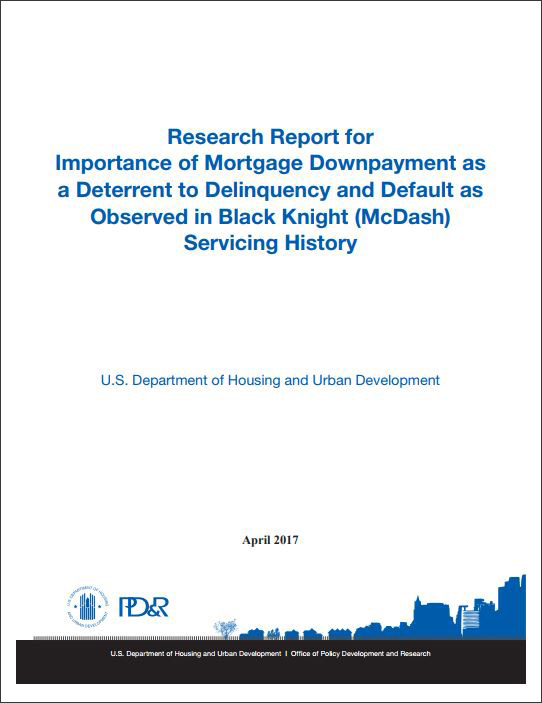 For mortgage lenders, the cash downpayment mitigates credit risk. For low- and moderate-income households, however, saving for a downpayment represents a significant barrier to homeownership. New research sponsored by HUD’s Office of Policy Development and Research (PD&R) examines the effectiveness of the cash downpayment as a deterrent to delinquency and default. The research also highlights compensating factors such as higher credit scores and lower debt-to-income ratios that are equivalently associated with lower rates of delinquency and default.

To complete the research, PD&R contracted with an economic consulting firm that utilized a database composed of loan-level mortgage origination and performance data for more than 19 million loans originated between 2000 and 2012. Researchers used this database to empirically measure the extent to which differing downpayment amounts reduce the risk of mortgage default while simultaneously measuring the associated compensating factor equivalents.

Although much of the previous research on factors contributing to loan default uses a competing risk model that discounts the effect of the initial downpayment amount on the incidence of default, the PD&R-sponsored study uses a score-card type estimation approach to estimate the credit risk of mortgage loans. The empirical strategy included loan origination underwriting factors such as the combined loan-to-value ratio (CLTV) of the loan (the ratio of the loan amounts secured by a property to the value of the property), credit score, and debt-to-income ratio (DTI), the ratio of household debt to household income) of the borrower, among other factors. The CLTV of the loan is a measure of the borrower’s downpayment. The larger the downpayment relative to the purchase price of the home, the smaller the CLTV ratio of the loan.

The researchers developed a series of regression analyses to model the effects that changes in loan and borrower characteristics (independent variables) have on the probability of default (dependent variable). “Default” was defined as being 90 days delinquent within the first 2 years of the loan or having had foreclosure proceedings initiated over the life of the loan (which the researchers termed “probability of default,” or PD). In setting the probability of default as the dependent variable, the researchers could model how changes in a loan’s combined loan-to-value ratio could be compensated for by other factors to hold the default probability constant — for example, could an increase in the loan-to-value ratio (CLTV) of a loan (for example, from 80% CLTV to 90% CLTV) be compensated for by a lower DTI or a higher credit score?

The findings demonstrate that compensating factors can be balanced against changes in downpayment amounts to mitigate credit risk. For example, if a borrower’s credit score decreased by 100 points, from 680 to 580, the CLTV of the loan would need to decrease by 20 percentage points to keep the probability of default constant. The findings also show that as DTIs increase, the CLTV must decrease to maintain the same likelihood of default. For example, a change in borrower DTI from 40 percent to 45 percent would require a decrease in CLTV equal to 0.46 percentage points.

Other analysis shows the difference between investor-owned properties and those occupied as a primary residence. When all other factors are held constant, the CLTV for an investor-owned property needs to be more than 7 percentage points lower than that of an owner-occupied home to maintain the same probability of default.

In addition to examining how compensating factors mitigate the credit risk associated with borrower downpayments, the researchers also explored the relationship between borrower defaults and borrower characteristics when holding the CLTV ratio constant. For example, a loan with a CLTV of 90 percent has a probability of default that is 12 times higher for borrowers with a credit score of 500 rather than 800. A borrower with a 90 percent CLTV loan and DTI of 42 percent is only 1.03 times more likely to default than is a borrower with a DTI of 35 percent.

Using loan-level origination and performance data, the researchers quantify the impact of downpayment on delinquency and default and quantify the tradeoff between downpayments and other loan characteristics. The research findings underscore the importance of the downpayment in managing mortgage credit risk while at the same time enhancing our understanding of the relative importance and contributions of various compensating factors as offsets to a borrower’s downpayment. The findings make an important contribution to our understanding of credit risk management and mitigation with potential for broadening access to the mortgage market.