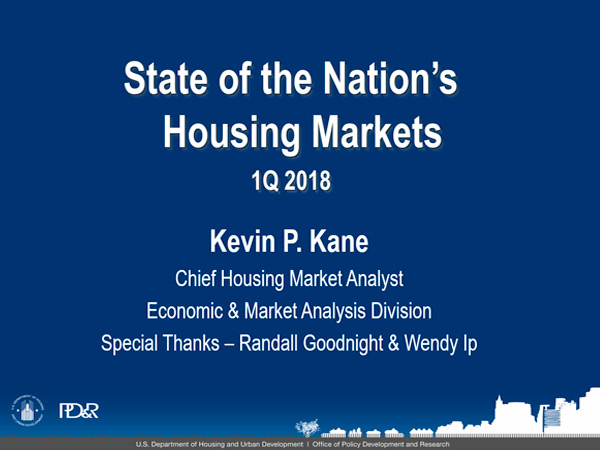 At the June 21 PD&R Quarterly Update, PD&R’s chief housing market analyst Kevin Kane discussed the state of the nation’s housing markets in the first quarter of 2018.

Each quarter, the Office of Policy Development and Research (PD&R) produces a report that highlights key statistics and trends in the housing market, including housing starts and completions, home sales and prices, rental affordability, and mortgage interest rates. To create these reports, PD&R compiles and analyzes data from HUD as well as from the U.S. Census Bureau, the National Association of Realtors®, the Federal Housing Finance Agency, the Mortgage Bankers Association, the Bureau of Economic Analysis, and other sources. The following summary examines the state of the nation’s housing markets in the first quarter of 2018 as PD&R’s chief housing market analyst Kevin Kane discussed at the June 21 PD&R Quarterly Update.

Nonfarm payrolls increased by 1.5 percent during the first quarter of 2018, slightly less than the growth rate of 1.7 percent a year ago. The pace of quarterly job gains has been declining slowly since peaking at 2.2 percent at the end of 2015. Every region in the country added jobs during the first quarter. The Northwest Region experienced the strongest job growth at 2.7 percent, led by a 3.5 percent increase in Idaho, which had the fastest rate of job growth in the country. The national unemployment rate was 4.3 percent in the first quarter, declining from 4.9 percent a year ago. Unemployment rates ranged from 3.5 percent in the Rocky Mountain Region to 4.9 percent in the New York/New Jersey Region and Northwest Region. Compared with a year ago, unemployment rates were down in nine regions and unchanged in the Rocky Mountain Region.

Sales market conditions generally range from balanced to tight in much of the country. All three major home price indices (Standard and Poor’s Case-Shiller, Federal Housing Finance Agency, and CoreLogic) indicate that during the first quarter of 2018, home sales prices rose by about 7 percent relative to a year ago. According to CoreLogic data, home prices were up in all states and the District of Columbia. The largest increases in home prices were in Washington and Nevada, which rose 13 percent, followed by a 12 percent increase in Idaho and an 11 percent rise in Utah. The median price of a new home in the first quarter was $328,000, up 5 percent from a year ago (U.S. Census Bureau), and the median price of an existing home was $243,800, up 6 percent from a year ago (National Association of Realtors®).

The nation’s foreclosure rate continues to decline. As of March 2018, an average of 2.2 percent of all home loans were 90 or more days delinquent, in foreclosure, or were real estate owned, down from 2.5 percent a year ago. Although the New York/New Jersey Region’s foreclosure rate of 3.9 percent remains the highest in the country, it was down 1.3 percentage points from a year ago, the largest such decline in the nation. Because of last year’s hurricanes, foreclosure rates are also elevated in Florida and the gulf coast of Texas.

Single-family homebuilding, as measured by the number of homes permitted, totaled 178,300 homes, up 6 percent during the first quarter relative to a year ago. The number of permits issued increased in six regions, led by an 18 percent gain in the Pacific Region and a 15 percent increase in the Rocky Mountain and Northwest Regions. The number of multifamily units permitted rose by 7 percent from a year ago, and six regions had gains ranging from 9 percent in the Mid-Atlantic Region to 33 percent in the Rocky Mountain Region.

Apartment market conditions are relatively balanced across the country. Previously tight conditions in several markets in the Mid-Atlantic Region have become balanced, with increased apartment construction in Philadelphia; Baltimore; and Washington, DC. Tighter apartment market conditions in the Midwest Region have eased a bit in some markets. According to data from Reis, Inc., the national apartment vacancy rate was 4.7 percent during the first quarter, up from 4.3 percent a year ago. Vacancy rates were up in all 10 regions. Apartment rents were up by 4.4 percent from a year ago (Reis, Inc.). Rents rose in all regions, with increases ranging from 3.5 percent in the Great Plains Region to 6.5 percent in the Northwest Region. On a metropolitan level, rents increased in all 274 market areas reported by Reis.