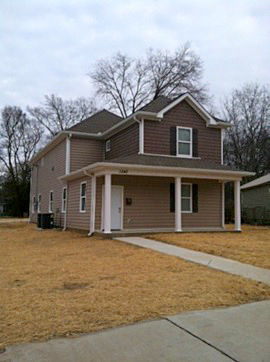 Nashville, Tennessee is among the 47 states and 80 cities counted by the Center for Community Change to have established housing trust funds, with a dedicated source of revenue for affordable housing development. Facing a decline in housing affordability brought on by a low rental vacancy rate and rising rents, the council of the Metropolitan Government of Nashville and Davidson County created the Barnes Fund for Affordable Housing, an affordable housing trust fund, in July 2013. The council established the Metropolitan Housing Trust Fund Commission to oversee the fund. The Fund awards grants to nonprofits for affordable housing development and renovation projects. In its initial round of funding, it helped foster the development of 43 units of affordable rental housing, and the program is evaluating additional affordable housing projects to support in the program’s second round.

Responding to a Growing Need for Affordable Housing in Nashville

In his 2013 State of the Metro Address, Nashville’s Mayor Karl Dean said, “Too many in our city are burdened by housing costs, forcing them to often choose between paying their rent or buying food, buying medicine or buying other basic needs for their family.” According to the most recent consolidated planning data, approximately 36 percent of households in the Nashville metropolitan area governed by the consolidated metropolitan government are cost burdened, paying more than 30 percent of their income for housing. Approximately 66 percent of low-income households in the area are cost burdened, a rate exceeding that of low-income households in both the state and the nation as a whole. And the need for affordable housing is growing; American Community Survey data indicate that, between 2010 and 2013, the median gross rent in the city increased by more than 10 percent while the rental vacancy rate decreased from 7.2 percent to 5.7 percent. According to Erik Cole, director of financial empowerment at Nashville’s Metropolitan Government, these changes in the rental market as well as the work of advocates in the nonprofit developer community, brought the need for affordable housing to the attention of local policymakers.

Named after William Barnes, a longtime advocate for affordable housing in Davidson County, the Barnes Fund was created to financially support projects that increase the number of affordable units or improve the affordability of existing units. The Barnes Fund was initially capitalized with $2.27 million in repayments from developers who received loans under HUD’s now-inactive Urban Development Action Grant program, as well as $1 million in HOME Investment Partnerships Program funds provided by Nashville’s Metropolitan Development and Housing Agency. The Metropolitan Housing Trust Fund Commission distributes grants to nonprofit agencies, giving priority to projects for which grant funding can leverage tax credits or other affordable housing financing.

During the Barnes Fund’s initial round of funding in 2014, the Metropolitan Housing Trust Fund Commission allocated $2 million to five projects through a competitive grant process. The Barnes Fund’s support helped these projects attract an additional $2.5 million in federal and private funds. When completed, the 5 projects will offer 43 units, with approximately half of the units affordable to households with incomes at or below 50 percent of the area median income (AMI); the other half of the units are specifically designated for special-needs households with incomes at or below 30 percent of AMI. The Woodbine Community Organization (the first recipient) constructed the two projects, each composed of seven single room occupancy units. In addition to funding from the Barnes Fund, the developments received HOME Investment Partnerships Program funds from HUD. The projects were completed in 2014, and the units, affordable to those earning 30 percent or less of AMI, are fully leased.

Of the remaining three multifamily project, the Be a Helping Hand Foundation is currently developing two, and Urban Housing Solutions held a groundbreaking for the third in April 2015. The projects will provide 8 studio, 12 one-bedroom, 3 two-bedroom, 3 three-bedroom, and 3 four-bedroom units.

Continuing to Make an Impact in Nashville

The Barnes Fund is now in its second funding cycle, and Nashville’s metropolitan government is focusing on financing for the fund. In the 2014–2015 budget, the Metropolitan Council accepted Mayor Dean’s recommendation and allocated $500,000, the first transfer from the general fund to the Barnes Fund. The Metropolitan Development and Housing Agency is also expected to contribute another $1 million toward Barnes-related projects, and the sale of Nashville’s Convention Center could generate an additional $5 million for the Barnes Fund. The Metropolitan Council has also designated a portion of Nashville’s tax on short-term rentals as a dedicated source of funding for the Barnes Fund. Mayor Dean’s proposed budget for fiscal year 2015–2016 includes $1 million in general funds, including revenue from the tax on short-term rentals; other sources of funding will continue to be sought and evaluated.

According to Cole, the Metropolitan Housing Trust Fund Commission plans to release a request for proposals for the second round of funding from the Barnes Fund in June 2015. Cole states that, to give the commission the flexibility to adapt to local funding needs, the authorizing legislation for the Barnes Fund allows the commission to change the eligibility criteria for each funding round. Although rental projects were the focus of the first round of funding, eligibility requirements for the second round will be expanded to include homeownership projects. In addition, as part of the second round, 16 government-owned, surplus properties will be made available to nonprofits seeking to develop affordable housing in an effort to help lower their costs.

Interview with Erik Cole, 14 May 2015; Document provided by Erik Cole.