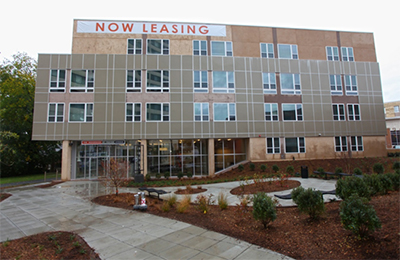 The Residences at Thayer Avenue provides 52 apartments, 42 of them affordable to low- and moderate-income households, located within walking distance of the Silver Spring Metro station. Image Credit: Landex Development

The Residences at Thayer Avenue is a 52-unit, mixed-income development located at the edge of the central business district of Silver Spring, Maryland just north of Washington, DC. The apartments offer an exceptional level of connectivity and walkability. Metrorail’s Silver Spring station and several bus lines – as well as public parks, grocery stores, restaurants, and an elementary school – are located within a half-mile of the building. Affordable housing that offers this level of transit access and walkability brings low- and moderate-income households within easy reach of the jobs and other opportunities available in the DC metropolitan area, and reduces traffic congestion and greenhouse gas emissions.

Need for Affordable Housing
Silver Spring is located in Montgomery County, which with a median household income of $98,221 for 2009 –13, is among the wealthiest counties in the nation. Despite the county’s overall wealth, approximately 23 percent of county households had incomes of less than $50,000 in 2011–13. To address the demand for affordable housing, Montgomery County adopted the nation’s first inclusionary zoning requirement in 1974. According to the county’s current requirements, all residential developments of 20 or more units must ensure that 12.5 percent of the units are moderately priced dwelling units (MPDUs) affordable to low- and moderate-income households. For example, an individual with an annual income between $30,000 and $53,500 is eligible to rent a high-rise MPDU, typically at a monthly rent of 25 percent of income. In exchange for providing the affordable units, developers typically receive a density bonus allowing them to build more market-rate units than the county would otherwise allow.

The MPDU requirement has created approximately 12,500 units of affordable housing. Despite this significant accomplishment, the need for affordable housing in Montgomery County remains high; 51 percent of renter households devote 30 percent or more of their income toward housing costs. A 2013 assessment by the county’s Department of Housing and Community Affairs (DHCA) concluded that the current shortfall in affordable units is likely to continue over both the near and long terms.”

The Residences at Thayer Avenue

Built in the 1960s, the office building at 814 Thayer Avenue had been vacant for several years when the Montgomery County Planning Board approved plans in 2007 to replace the offices with a 52-unit residential building. In accordance with the MPDU program, seven of the condominiums were required to be affordable units. However, the original developer was unable to secure construction financing, and in 2010, Landex Corporation, in partnership with the county, began plans for what would become the Residences at Thayer Avenue. With experience in mixed-income development as well as expertise in taking over incomplete projects, Landex increased the number of affordable units to 42 and secured financing for the $18.5 million development from several affordable housing sources, including $11.9 million from the Maryland Department of Housing and Community Development and $4.5 million from the Montgomery County Housing Initiative Fund.

To bring the mixed-income development to fruition, the developer had to overcome environmental challenges to receive HUD funds. An assessment of the site revealed traces of chemicals in the soil, soil gas, and groundwater originating from a dry cleaner on a nearby property. Although the chemicals were present only in low concentrations, Landex’s environmental consultant, Urban Green Environmental (UG), devised a vapor mitigation system to remediate the threat of volatile organic compounds (VOCs) entering the proposed building through the porous foundation. The sub-slab depressurization system consisting of a layer of gravel and network of piping creates a pathway to divert VOCs from the foundation and vent them above the roof. As an added precaution, the developer altered the building plans to raise the foundation well above the water table.

Landex chief executive officer Peter Siegel worked with Karen Roper, a representative of the East Silver Spring Citizens’ Association, to address neighborhood concerns about parking, traffic, and other issues. Siegel says that fostering a good relationship with the community eased the development process, and Roper, who found Landex unusually responsive and sincere compared with other developers she had encountered, says the cooperation made a “tremendous difference” to the community. 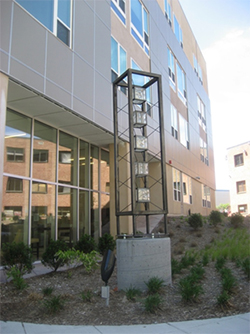 The development offers public access to a sculpture garden that features work by students of a nearby community college on a rotating basis.

The Residences at Thayer Avenue consists of 52 apartments, of which 10 are market rate, 32 are for households earning 60 percent or less of the area median income (AMI), and 10 are for households with incomes at or below 30 percent of AMI. The building offers 41 one-bedroom apartments and 11 two-bedroom apartments. Four residential floors sit above an underground parking garage that includes 20 parking spaces and secure bicycle storage. Residents have access to a fitness room, lounge, courtyard, and a sculpture garden that is also open to the public. The Residences opened in October 2014. Reflecting strong demand, Siegel reports that the 52 units were leased in approximately 3 months.

The sculpture garden features a rotating exhibit by student artists from nearby Montgomery College. Each exhibit is intended to reinforce the property’s continuity with the surrounding neighborhood that, as a state-designated arts and entertainment district, is home to more than 50 arts or humanities organizations, such as the American Film Institute’s Silver Theatre and the CREATE Arts Center.

The development includes several sustainable features for which the developer is seeking Leadership in Energy and Environmental Design Silver certification. The building has a green roof, a stormwater retention system that includes a bioretention pond, low-e glass windows, ENERGY STAR® appliances, motion sensors throughout the building to reduce unnecessary light use, and vinyl plank flooring that lasts longer than carpet. In addition, the development’s proximity to existing and planned public transit and to a vibrant commercial district promises to reduce fossil fuel emissions associated with car travel. Walk Score gives the property a transit score of 89 and a walkability score of 97, noting that daily errands do not require a car.

Affordable Housing and Its Regulatory Context

The site of the Residences was subject to several zoning-related obligations, including the requirements to offer public space and to have a green roof or otherwise minimize the building’s impervious area. UG principal and senior technical manager Denise Sullivan also notes that the standards of the environmental assessment are very conservative, requiring remediation even for low levels of risk. In short, the development was subject to a relatively stringent regulatory context. Although these regulations offer tangible benefits to residents and the surrounding community, they can also increase the cost and complexity of affordable housing development.

The Residences struck a delicate balance between meeting these regulatory requirements and successfully providing 42 units of affordable housing. Siegel credits DHCA for recognizing this tension and for helping Landex navigate the county’s bureaucracy. As a property offering more than 20 percent of its units at affordable rents, The Residences qualified for the county’s Green Tape expedited review process. DHCA actively worked on behalf of The Residences to speed permitting and ensure compliance with MPDU requirements. DHCA also helped county agencies understand the state and federal requirements that accompanied the development’s various funding sources and stepped in to resolve problems as they arose. For example, DHCA explained to the Montgomery County Planning Board that requiring the undergrounding of utilities would be cost prohibitive for the affordable housing development, and the board subsequently waived the requirement and developed an alternative plan. This cooperation from the county, along with the environmental remediation solution that UG developed and a healthy relationship with the surrounding community, helped make this transit-oriented, mixed-income development possible.