Celadon at 9th and Broadway: Maximizing the Potential of an Affordable Housing Site 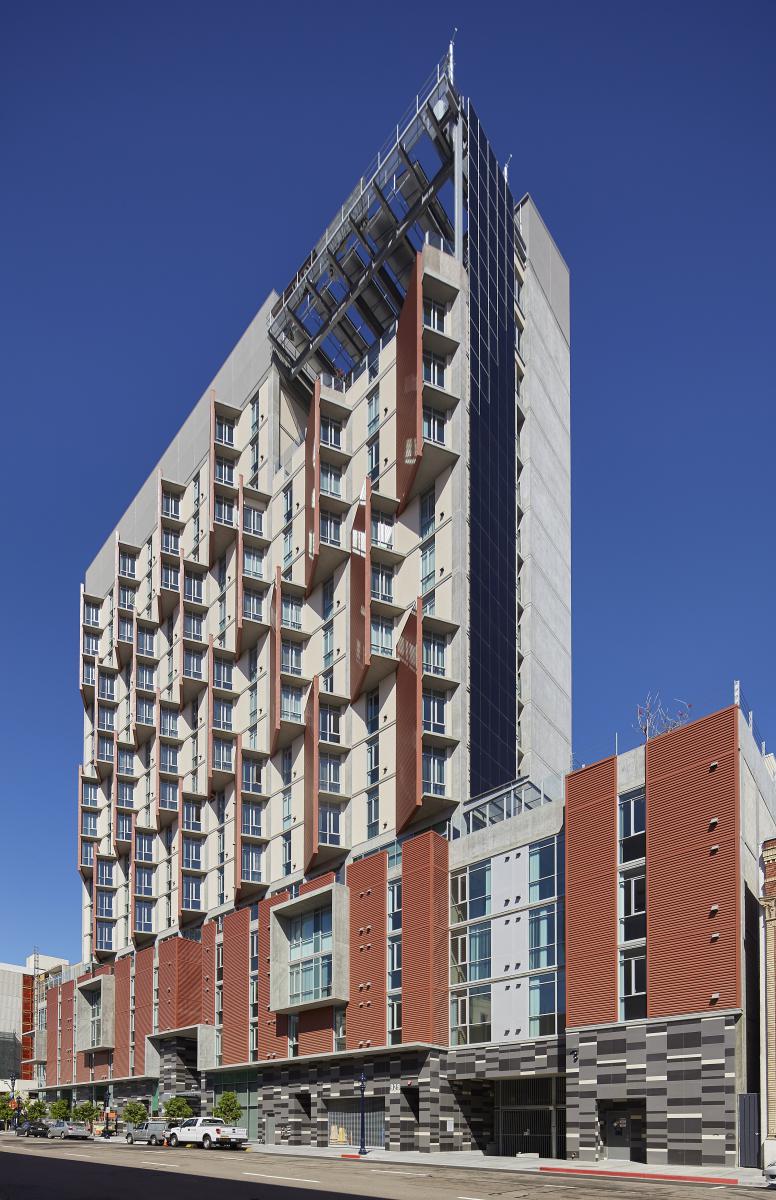 Celadon features a 15-story vertical array of solar photovoltaics on the southern façade of the building, which provides electricity for the building's common areas. Credit: Stephen Whalen Photography

Celadon at 9th and Broadway is an affordable housing project in San Diego, where housing costs are high even by California standards. In a county that saw median rents increase by 23 percent between 2000 and 2012 while median household income declined by 7 percent, an estimated 127,930 units are needed to affordably house very low- and extremely low-income households. Both state and San Diego policymakers recognize that increasing the area’s supply of affordable housing is a critical need. To address that supply issue, the Celadon project, offers 250 affordable apartments in downtown San Diego. At the same time, the challenging infill development inserts a 17-story building on a 100-by-250-foot site to achieve state and local goals for transportation, sustainability, and economic development.

Celadon at 9th and Broadway

Occupying a former parking lot, Celadon at 9th and Broadway contains 142 living units (that is, single room occupancy units with kitchenettes and bathrooms), 32 studios, and 76 one-bedroom units. All of Celadon’s units are affordable to households earning 30 to 60 percent of the area median income. In addition, project-based vouchers are offered for 63 units for frail seniors and 25 units for adults and transition-age youth (often from foster care, juvenile institutions, or the justice system) with mental illness.

The building has three major common areas — a 15th floor terrace with views of San Diego Bay; a supportive services office, laundry room, meeting room, and an outdoor space, and resident garden on the 5th floor; and a community room, kitchen, and outdoor space on the ground floor. Eric Naslund, principal and partner at Studio E Architects, the design architect for the project, says that the terrace was an effort to give everyone in the building access to the most scenic views of San Diego Bay. The building also incorporates 5,300 square feet of street-level commercial space expected to be leased by fall 2015; Brad Richter, assistant vice president of planning for the city-owned nonprofit development agency Civic San Diego, notes that developing active commercial uses on Broadway, a major transit corridor in the city, was a major priority. The building includes only 116 subterranean parking spaces for residents, fewer than typical residential developments where automobile ownership rates are higher, thus reducing construction costs. 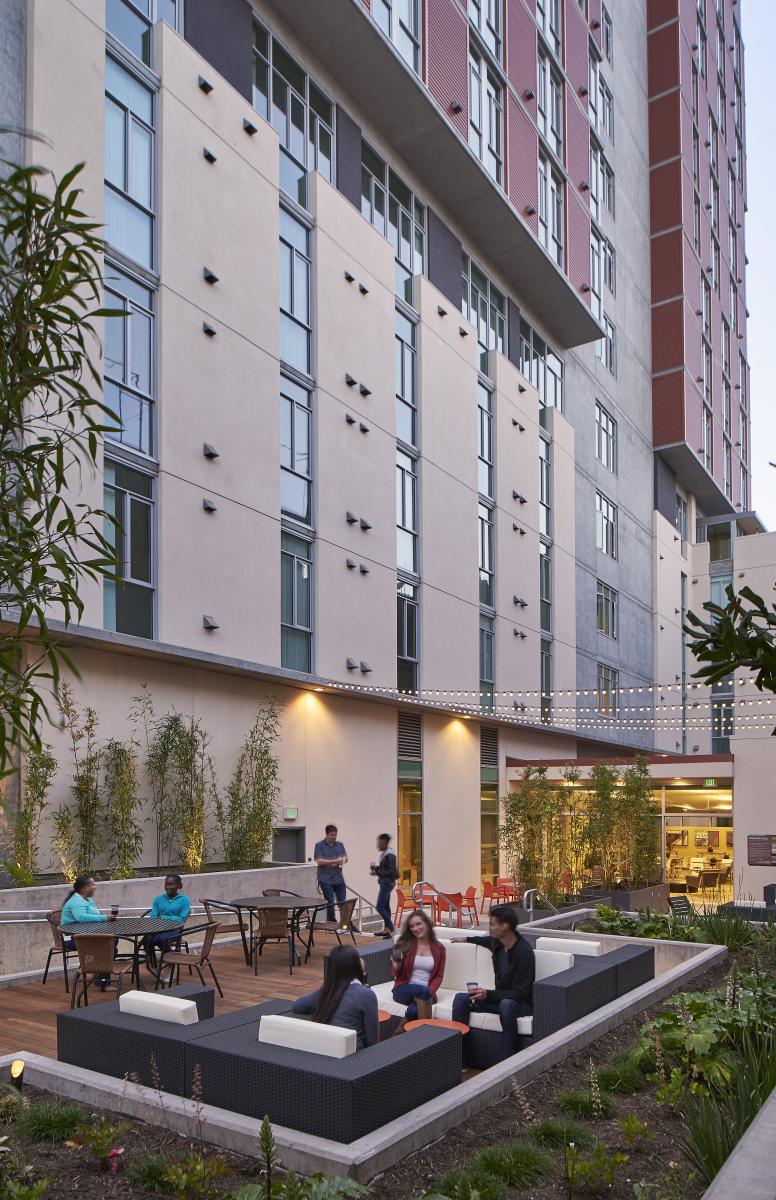 A patio beside the Celadon building is one of three outdoor spaces for residents. Credit: Stephen Whalen Photography

Citing minimum requirements for floor area ratios, Ritcher says city policies effectively called for a high-rise building on the site. Primary funding for the $74 million development included $22 million in city redevelopment funds (the project was approved before California dissolved local development agencies in 2012). The other major source of funding was a combination of 4 percent and 9 percent low-income housing tax credits. According to Aruna Doddapaneni, BRIDGE’s director of real estate development for southern California, 9 percent credits require projects to be completed in less time than it usually takes to construct a typical high-rise building, so in a nod to the realities of this type of construction, BRIDGE worked with the state’s Tax Credit Allocation Committee to extend Celadon’s required completion date by exchanging and carrying over the tax credits for an additional year. This change gave BRIDGE until the end of 2015 to complete the Celadon project. The building was split into two parcels, with the 9 percent credits used to finance the first eight floors and the 4 percent credits used for the upper floors and the underground parking.

Celadon relies on solar power to reduce operating costs. The building features a 143-foot-tall solar photovoltaic system on the southern side of the building making it the tallest in the United States according to Adroit Solar, the project’s solar power contractor. The array features a section of 40 translucent panels that shade an outdoor common area but allow some sunlight to pass through. The vertical array generates approximately 10 percent of the electricity needed for the building's common areas. Also reducing operating costs is a rooftop solar hot water system, which supplies approximately half of the building's hot water needs.

San Diego’s requirement of Leadership in Energy and Environmental Design (LEED) Silver certification for city-funded projects and California’s Title 24 energy code standards made solar power an attractive option. Available rebates from the California Solar Initiative's Multifamily Affordable Solar Housing program and the New Solar Homes Partnership program were additional incentives to use solar power for the complex, according to Doddapaneni.

On a small site, Celadon provides affordable housing and retail space in an energy-efficient building located in a transit-oriented, mixed-use neighborhood, integrating housing, sustainability, transportation, and commercial development goals. Doddapaneni believes Celadon is a good model for other mixed-use high-rise developments on small sites. In an era of limited resources, future projects that can replicate Celadon’s model have the potential to provide public policy benefits beyond affordable housing. Such integrated projects offer affordable housing advocates the opportunity to highlight how affordable housing can complement other critical policy initiatives.