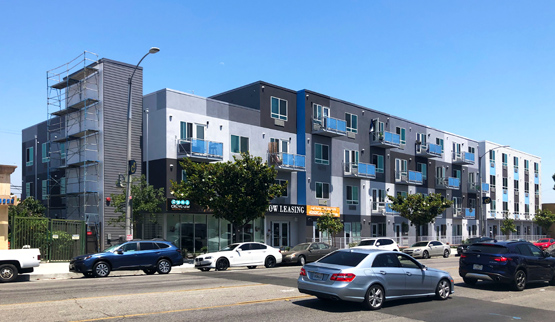 Constructed under TOC guidelines, a 112-unit apartment building — 4252 Crenshaw, the first new multifamily construction in Leimert Park in 30 years — is a tier four project that includes 13 ELI units in exchange for an 80 percent density increase. Credit: The Architects Collective

Residents of transit-rich areas in the city of Los Angeles are more likely to have low incomes and rely on public transportation. These residents also risk displacement through the development of new market-rate housing. To create more affordable housing in areas where people need it most, city voters approved Measure JJJ in 2016. Among other requirements, the measure created the Transit Oriented Communities Affordable Housing Incentive (TOC) program, which encourages developers to build mixed-income housing near major transit stops. In addition, the city ordinance establishing the TOC program required the Los Angeles Department of City Planning to promulgate a set of guidelines that explains eligibility requirements and the incentives for developers to set aside extremely low-, very low-, and low-income units. The department has also tracked the program’s housing activity and trends since its September 2017 launch through housing reports and an interactive dashboard, which show the program’s progress in meeting the city’s housing needs.

The TOC guidelines apply to housing developments proposed within a half-mile radius of stops on regular bus lines, rapid bus lines, and Metrolink rail lines. The radius around each major transit stop delineates an incentive area, which is divided into three concentric circles measuring 750, 1,500, and 2,640 feet from the stop. In addition to a project’s distance from a transit stop, the guidelines consider the type of transit stop to assign the project to one of four tiers. The tier determines the percentage of required affordable housing and regulatory relief, which diminish as the distance from the major transit stop increases. For example, a development within 750 feet of a station serving two intersecting regular bus lines (tier 2) must reserve at least 9 percent of its units for extremely low-income (ELI) households, 12 percent for very low-income (VLI) households, or 21 percent for low-income (LI) households. A project less than 750 feet away from a rail station (tier 3), however, must reserve 10 percent of its units for ELI households, 14 percent for VLI households, or 23 percent for LI households. In exchange for providing the required housing, the developer is allowed to increase the number of units by 50 to 80 percent and to reduce parking, depending on the project’s tier. If the development provides affordable housing beyond the base requirement — or adheres to the labor standards specified in Measure JJJ — it is eligible for up to five additional incentives. These incentives are an increase in allowable building height and lot coverage and reductions in required setbacks, lot width, and open space.

Since November 2019, city housing updates, which were originally published through annual and quarterly housing reports, have been reported through the city’s Housing Progress Dashboard, which gives a comprehensive, transparent summary of Los Angeles’ housing pipeline. The dashboard reports that between January 2018 and June 2021, 20,166 housing units were approved under the TOC program, of which nearly a quarter were affordable.

The dashboard also analyzes the affordability of TOC housing by income group, showing the effect of the program on housing production for the lowest-income households. Twenty-seven ELI housing units were approved in 2017, but in 2018, when the guidelines were in effect, 328 ELI units were approved, 81 percent of which were developed through the TOC program. Matt Glesne, a senior planner for the city, explains that the density bonus program, a major incentive program that predates the TOC program, produced VLI and LI housing with density increases of 11 and 35 percent, respectively, so the TOC guidelines set the density increase at 60 percent for ELI housing. In addition, the guidelines require fewer units for ELI households than for other low-income groups. A recent article in Cityscape, a journal published by HUD’s Office of Policy Development and Research, confirms that these TOC incentives can generate a higher internal rate of return that encourages developers to build ELI units rather than VLI or LI units.

The dashboard data also show that the TOC program fosters equitable development by bringing market-rate units to less affluent areas and ELI housing to more affluent areas with access to quality services and opportunities. For example, the less affluent planning area of Westlake gained 1,546 market-rate units in combination with 287 ELI units, and TOC developments in the more affluent planning area of Hollywood were approved with 1,356 market-rate units along with 264 ELI units. Yeghig Keshishian, chief external affairs officer for the city’s planning department, says that this development pattern “is a huge success, because the only way cities across the nation are going to get out of their own respective housing shortage is by everyone taking on a bit more responsibility.”

Click here to access the TOC guidelines and information about how they address regulatory barriers. Find more plans, regulations, and research that state and local governments can use to reduce impediments to affordable housing on HUD User's Regulatory Barriers Clearinghouse.