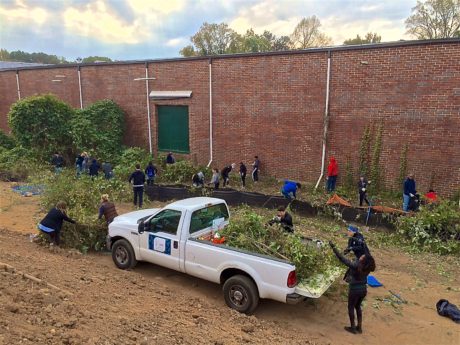 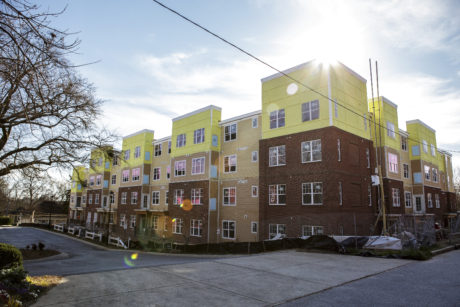 The 21st century has ushered in a new era of infrastructure investment in Atlanta that will potentially stimulate equitable redevelopment across the region for years to come. The force driving this redevelopment is a 22-mile network of abandoned railroad corridors that is being repurposed as a multiuse system of transit, trails, and greenways. Known as the Atlanta BeltLine, this infrastructure project is one of the most ambitious in the country; once completed, it will directly connect 45 neighborhoods along a multimodal transportation corridor. Through its early stages, the BeltLine has shown its ability to catalyze equitable development and has demonstrated the substantial benefits that sustainable infrastructure can play in urban redevelopment.

The Atlanta BeltLine reflects a broad vision for a multimodal, accessible transportation network that promotes active and public transportation, meeting the needs of both transit-dependent riders in the west side of the city and transit-choice riders in the east. The initiative reclaims and connects four different historic railroad corridors, creating a mobility option encircling the city that is not car dependent. It will run on a dedicated right-of-way that will include 33 miles of adjacent biking and walking trails. The same modern streetcar technology used to move people in downtown Atlanta can also run on the 22-mile BeltLine loop, with an additional 28 miles of expanded streetcar service that will run east/west and north/south across the city. The BeltLine will also intersect with the Metropolitan Atlanta Rapid Transit Authority, the regional heavy rail and bus system that serves many area commuters.

As of September 2016, $450 million in public funds, which were primarily used to acquire most of the old rail footprint, have leveraged $3.6 billion in private investment — a 7 to 1 return on investment. Two public referendums on the November 2016 ballot reaffirmed the public’s overwhelming support for the Atlanta BeltLine development. First, voters approved a sales tax of 4/10 cent for local transportation improvements that included $66 million to acquire the remaining right-of-way, allowing the engineering and construction of the full BeltLine corridor. Second, voters approved a separate half-cent sales tax to build out transit and expand the existing streetcar system to the Atlanta BeltLine.

One priority of the revitalization plan is to expand affordable housing throughout the BeltLine neighborhoods. To further equitable development in the region, the city of Atlanta, along with Invest Atlanta, the Atlanta Housing Authority, and Atlanta BeltLine, Inc. (ABI), is creating and preserving affordable housing across BeltLine neighborhoods. Of the 28,000 housing units envisioned in the BeltLine’s strategic implementation plan, 20 percent, or 5,600 units, will be affordable to low- and moderate-income households. In 2005, a tax increment financing district, the Atlanta BeltLine Tax Allocation District, was established to implement the revitalization project. The Atlanta City Council established the Atlanta BeltLine Affordable Housing Trust Fund (BAHTF) in 2008 to finance the construction and preservation of affordable housing in BeltLine neighborhoods. The city dedicates 15 percent of the revenues of the BeltLine Tax Allocation District to BAHTF. (See “Atlanta, Georgia: Affordable Homeownership on the BeltLine” for more information on the project.)

One ABI project, the Lofts at Reynoldstown Crossing, is a 29-unit condominium redevelopment of a languishing asset that has brought affordable homeownership opportunities to the city’s workforce. The project, a 2013 finalist for the Urban Land Institute’s Jack Kemp Workforce Housing Models of Excellence Award, has partnered with the Atlanta Land Trust Collaborative to ensure that three of the units, which went to police officers and a teacher, will remain affordable permanently. Funds from the BeltLine Tax Allocation District made it possible to fill the gap between development costs and an affordable price for the units. Each unit cost $170,000 to develop, including acquisition and construction, and the average price of the homes was $150,000. BAHTF provided each homebuyer with a zero-interest, deferred-payment second mortgage of approximately $64,000, which lowered borrowers’ monthly housing payment to approximately $1,000. This second mortgage is paid to BAHTF if a unit is sold within 15 years of purchase. The second phase of Lofts at Reynoldstown Crossing is currently in the design phase.

At the June 2014 board of directors meeting for ABI, Mayor Kasim Reed and other board members expressed concern about proposed developments near or adjacent to the Atlanta BeltLine that lacked density, appropriate building scale and block size, green space, and pedestrian amenities. Mayor Reed asked ABI to identify a tool to help the city of Atlanta’s Department of Planning and Community Development shape development around the BeltLine according to the Atlanta BeltLine Overlay District Ordinance and Subarea Master Plans. ABI created innovative framework in which a diverse committee provides the kind of design review for new development that might typically be considered a government function. The newly created BeltLine Design Review Committee, composed of ABI staff, architects, and designers, reviews and requests revisions to every proposed project within the BeltLine area. This process requires early communication with developers to raise concerns and address possible community opposition to developments that would alter the community’s character. It also potentially leads to a smoother permitting process because the developer is submitting a design that already has support. The committee has reviewed more than 60 Special Administrative Permits since its first meeting in September 2015, and changes made as a part of this process include the addition of wheelchair ramps in a senior housing project, improvement of sidewalks and streetscapes in adaptive reuse developments, and enhanced design around the Atlanta BeltLine. Although this design review process is now mandatory in Atlanta, other communities might launch a similar committee that acts in an advisory capacity.

By using public infrastructure, the BeltLine is laying a new foundation for where and how new development happens in the city, directing public and private investment to meet public policy goals such supporting affordable housing and revitalizing neighborhoods. Other ambitious goals involve the development of mixed-income communities, physically linking neighborhoods across the city and eliminating longstanding economic and cultural segregation through investments to improve mobility, connectivity, and regional equity. The BeltLine Equitable Development Plan provides a framework for supporting equity throughout the project, making the BeltLine a holistic solution to some of Atlanta’s key challenges rather than simply an amenity. The plan includes strategies and activities within ABI’s control as well as ways in which ABI can influence other parties to help achieve equitable development objectives. It advances this work not only in the BeltLine itself but also in the surrounding streets, parks, and streetscapes.

Key areas of implementation include minimizing displacement and leveraging economic opportunity in a way that stabilizes neighborhoods, and preserving and enhancing the historic and cultural aspects of neighborhoods — for example, through the incorporation of public art plans that reflect the character of BeltLine communities. Early grassroots supporters of the BeltLine helped shape the legislation that created the BeltLine’s Community Engagement Framework. This framework ensures that the community’s voice is heard and incorporated into current and future BeltLine implementation strategies and that this input genuinely impacts decisionmaking.

The BeltLine Equitable Development Plan will eventually invest in every neighborhood. ABI invests in projects throughout the city in a revolving fashion rather than investing in an area only after construction of the transit serving that area is complete. As a result, neighborhoods may see art, trails, parks, or streetscape improvements before any transit work has begun. In this way, every neighborhood is made to feel as though it is part of the investment along the way.

In addition, some specialized programs and processes were established to ensure that area residents benefit from the construction and other emerging job opportunities that the BeltLine creates. These include ensuring that workers are hired from BeltLine neighborhoods through a “first source” job register, paying prevailing wages, and initiating job training. In one program, healthcare partners commit to hiring neighborhood residents who complete the program’s training. Over the life of the project, the BeltLine will create an estimated 48,000 construction jobs and 30,000 new permanent jobs.

As Mayor Reed has said, “The public has high confidence in the Atlanta BeltLine. It has brought about the kind of development we said it would so it has a special kind of credibility. People have had the discipline not to interfere in its decisionmaking, and the decisions that have been made there have held in a really nice fashion. The Atlanta BeltLine is one of our most public assets so people treat it in a very ginger fashion.”