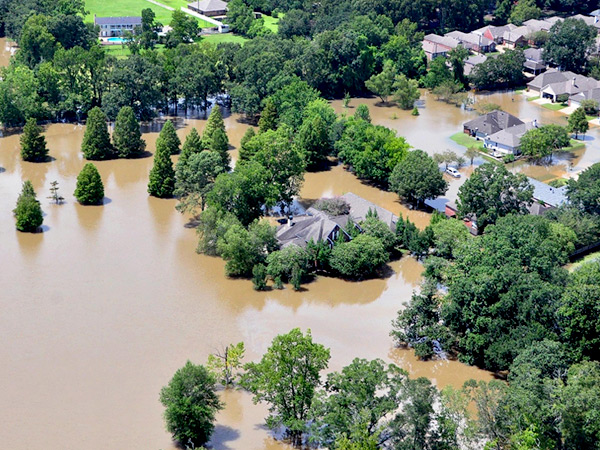 Last November, the Center for Planning Excellence of Baton Rouge hosted the Rising Above Symposium, a two-day workshop to coordinate Louisiana’s plans for adapting to hazard risk and impending environmental change. Louisiana is a recipient of $16.5 billion in HUD disaster recovery funds since 2005, mostly for Hurricane Katrina but also for hurricanes Rita and Gustav and the 2016 flooding event in Baton Rouge, among others. The state is currently undertaking major disaster recovery work, particularly in response to the 2016 flooding, in which an estimated half of seriously flooded homes were outside of the special flood hazard area. Looming over this recovery effort is the risk of more frequent extreme weather events and a receding coastline. As in so many other regions of the country, the state must simultaneously respond to the immediate needs of disaster victims while also carefully preparing for future natural hazards: encroaching waters from the Gulf of Mexico, land subsidence, and intensifying weather. This scenario is common and requires planning, coordination, flexible funding streams, and local ownership of the process. The state is implementing two broad efforts aimed at reducing risk: the Coastal Master Plan, a regularly updated capital plan aimed at achieving comprehensive coastal protection and restoration, and Louisiana Strategic Adaptations for Future Environments (LA SAFE), a more recent citizen-driven and comprehensive resilience initiative being piloted in six parishes and funded in part by HUD’s National Disaster Resilience grant program.

Three communities were chosen to participate in the symposium as examples of the varying predicaments of southern Louisiana being targeted by LA SAFE: Buras, a state-identified high-risk community that is gradually reconciling with an abandonment strategy; Chauvin, a moderate-risk community that must invest in property and community-level mitigation; and Thibodaux, a larger community on relatively high ground that is poised to receive migrants from low-lying areas. These scenarios, and Louisiana’s proposed plans to address them, provide a picture of adaptation challenges and solutions that may be of interest to other communities facing similar hazards.

The town of Buras (population 2,500), has experienced precipitous population decline since Hurricane Katrina, and state models predict that in 50 years, a 100-year flood would inundate the area with 14 feet of water. Louisiana is already losing an area the size of a football field every 100 minutes, on average, so coastal towns such as Buras struggle to adapt in a way that is equitable and that preserves the region’s unique cultural assets. Both the state’s partially funded Coastal Master Plan and LA SAFE propose gradually abandoning the area through voluntary property buyouts, prohibitions on new development and redevelopment following disasters, and the elimination of tax subsidies. The proposal to encourage abandonment is, understandably, the subject of intense debate, however, and the state faces an uphill battle justifying the cost-benefit approach in places where residents have historical and cultural connections to the land. Nevertheless, the state has experienced success through community engagement efforts focused on honest, information-based discussions that empower individuals and communities to make the best decisions for themselves.

In Chauvin (population 2,500), state models predict a less severe hazard risk; in the event of a 100-year flood, the town would be inundated with less than 6 feet of water. At this level, and considering the economic and cultural value of the community, the state plans to strategically maintain the community and others like it through robust mitigation interventions, including structural flood protection, nonstructural interventions such as wetland restoration, land-use planning, voluntary buyouts, property elevations, and floodproofing retrofits. In Louisiana as well as nationally, questions remain about how best to fund mitigation efforts and ensure that vulnerable populations have access to these resources. HUD currently encourages some disaster recovery grantees to incorporate natural hazard mitigation retrofits within their recovery investments. More research is needed to understand the costs and benefits of such efforts and how to ensure that resources are provided equitably.

In Thibodaux (population 15,000), most of the town’s historic footprint is just outside the 100-year floodplain, offering a potential haven from the flood risk predicted in other areas of the state. This, and the existence of a state university and regional healthcare facility, have positioned Thibodaux to experience an economic boom. Nevertheless, the state and the town acknowledge that such growth comes with challenges, and the community must prepare to accommodate housing and service needs, especially in the context of growing hazard risk in the larger parish. Flood risks near the town, coupled with intensifying real estate development in more flood-prone areas, will require careful planning. The Federal Emergency Management Agency’s floodplain maps may provide a false sense of security for residents of areas elevated just slightly above the designated plain. In 2016, as noted above, Baton Rouge had extended rainstorms that flooded the region and damaged nearly 100,000 homes, approximately half of which were just outside of the floodplain and therefore were not required to have flood insurance. With this history of flood impact, the state’s LA SAFE proposal incorporates risk-based land-use planning to mitigate the impacts of flooding even in areas that are not at the highest risk.

A shift to coordinated and risk-informed natural hazard response

The scenarios in Louisiana’s southern reaches are a harbinger for what many American communities will face in the coming years. Participants in the Rising Above Symposium discussed many hazard risk challenges and solutions. Two areas of improvement noted by multiple speakers were a need for better information and the increased use of voluntary buyouts.

Many communities and residents of risk-prone areas lack precise information about the future because of the challenges involved in predicting specific weather events. These challenges create uncertainty and inhibit the kind of pragmatic decisionmaking needed at all levels of the resource chain.

More research is needed to illustrate the dynamic costs of natural hazards and efforts to reduce risk. There are indirect costs to action and inaction alike that must be further investigated and documented to design cost-effective adaptation strategies.

Most of the discussion about flood mitigation focuses on investments in infrastructure and retrofits, yet one of the most cost-effective means of risk mitigation is reducing exposure to hazards through the voluntary acquisition of properties in high-risk areas. Louisiana is attempting to implement a broad voluntary buyout program as part of LA SAFE that would be funded through the state and other sources. This program would be part of a suite of options available to communities and homeowners preparing for future risk. The federal government funds buyouts for this purpose through an array of its own programs. Further evaluation of the LA SAFE approach could provide valuable information and justification for a more coordinated framework at the federal level. Indeed, communities at risk of abandonment number in the hundreds, with millions of people affected by land loss and rising Gulf water levels, meaning that the lessons learned from this program can instruct communities across the country.

Ultimately, states and communities are in the best position to decide how to recover and redevelop following a disaster, and, as it has with Louisiana’s LA SAFE plan, the federal government can enable these communities to engage in a forward-looking adaptation strategy that integrates risk-informed planning and leverages a range of public and private resources.

Benjamin H. Strauss, Scott Kulp, and Anders Levermann. 2015. “Carbon choices determine US cities committed to futures below sea level.” Proceedings of the National Academy of Sciences of the United States of America 112:44, 13508–13.