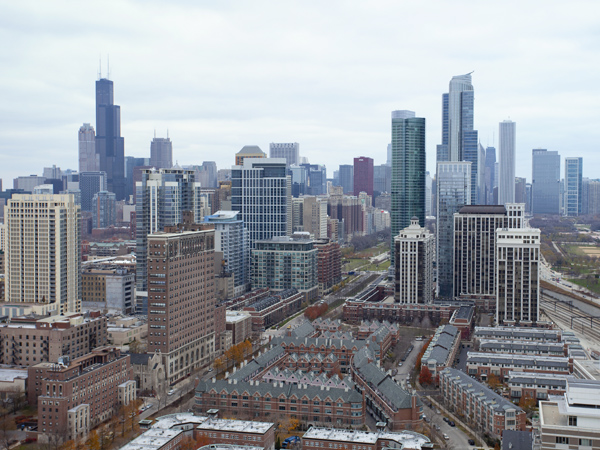 The increasing application of digital technology to urban development has potential positive and negative impacts. In Chicago, the city’s racial equity impact assessments use technology to track the distribution of benefits and burdens of development to ensure that marginalized groups are not shut out. Photo credit: istockphoto.com/Dennis Swanson - Studio 101 West Photography

In March 2022, the Joint Center for Housing Studies of Harvard University hosted “Bringing Digitalization Home,” a symposium exploring how digital technology might influence how housing is built, used, and financed. One panel explored how digitalization is changing the ways in which housing is planned, reviewed, and regulated, with participants focusing on not only the potential opportunities of digitization for fair and equitable housing but also the potential dangers, such as the risk of embedding existing biases in the design of emerging tools.

The growth of digital technology is proceeding hand in hand with the growth in available data and in the ability to analyze it quickly. As a result, said the panelists, new possibilities exist to create better models for understanding how development policies may impact equity goals — models that are more nuanced, timely, and innovative. Sarah Williams, associate professor of technology and urban planning at the Massachusetts Institute of Technology, reviewed efforts to create equity-focused, data-driven assessment models of urban development policies. When policymakers neglect to incorporate robust social impact measurement in their policy implementation, the resulting policies may aspire to uplift marginalized communities but have questionable impacts on local residents, as was the case with Opportunity Zones, said Williams.

In Chicago, Williams reported, the city created digitally based methods for determining policy impact at the local level. The racial equity impact assessment tracks the distribution of benefits and burdens of development to ensure that marginalized groups are not shut out. Similar efforts in Seattle; Boston; Detroit; and Washington, D.C., to measure and address gentrification and displacement give local policymakers insight into the consequences of development policy but also highlight a broader challenge: of the 18 total variables measured in these 4 cities’ models, only 2 overlapped. This variation presents a challenge for researchers interested in extracting best practices through a comparative analysis.

Private companies have also begun to self-report their environmental, social, and governance impacts. These efforts, like their public-sector counterparts, lack a common standard. One solution Williams discussed is an effort by some urban researchers to develop a certification program akin to the U.S. Green Building Council’s Leadership in Energy and Environmental Design (LEED) that could promulgate a shared set of social impact standards for real estate developers. Ultimately, these efforts will rely on creating data standards and increasing support for data production and provision so that impact evaluation becomes more accessible to stakeholders.

Nestor Davidson, faculty director of the Urban Law Center at the Fordham University School of Law, reviewed the potential of digitized techniques to ease some of the burdens facing litigants in fair housing cases. The 1968 Fair Housing Act prohibits public or private policies that, although superficially neutral with respect to the categories of people protected by the law, have disparate negative outcomes for a group. Legal claims to prove disparate impact, however, have traditionally relied on laborious data collection and analysis that are then fiercely debated in court, making the litigation process both long and expensive. With emerging digital approaches, Davidson predicted a future in which disparate impacts were significantly curtailed because digitization made the analysis needed to prove disparate impact claims significantly easier and less expensive.

Davidson’s team of researchers have found that developers are already using artificial intelligence techniques to create sophisticated digital models of real estate markets to guide their development decisions. To help even the playing field, Davidson advocated that the federal government supply data and data tools that address issues such as racially concentrated areas of poverty, access to opportunity, and levels of segregation to reduce the cost of local jurisdictions’ efforts to effectively and affirmatively further fair housing.

While Williams identified inadequate and inconsistent data practices within and across jurisdictions as a barrier to equity that digital tools could address, Paul Waddell, professor emeritus of city and regional planning at University of California, Berkeley, discussed the potential of digital tools to accelerate land use decisionmaking by integrating currently disparate datasets describing and regulating the urban environment. In his example, using digital tools to consolidate this information would allow planners, developers, and the public to understand and experiment with the effects of zoning code changes (such as density bonuses or inclusionary zoning requirements) on built form and financial feasibility. This digitally enabled technology, Waddell hoped, could help facilitate more productive discussions among stakeholders in a way that eases the development process.

Although some of the applications that the panelists described have yet to move beyond the early stages of development, the increasing digitization of urban development processes that are already in practice denotes a genie that cannot be put back into the bottle. As with any technology, the new housing-related tools panelists described will inevitably reflect the values and assumptions of the people who build those systems — which, according to the panelists, underscores the importance of critical engagement with how data are collected, analyzed, and deployed as these technologies become more widespread to ensure that equity, fairness, and affordability are central elements of these evolving systems.