Equitable Rebuilding in Detroit Through the Strategic Neighborhood Fund 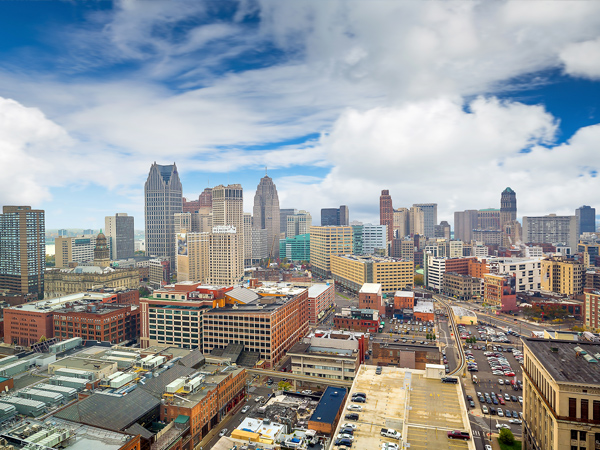 African-American residents of Detroit experienced devastating effects from the Great Recession. Job losses in the auto industry set off a chain reaction of income loss, declining property values, and depressed municipal tax revenue that induced the largest municipal bankruptcy in American history. Although Detroit has made significant strides over the past decade, some fear that those hardest hit by the recession may not be sharing in the benefits of the city’s recovery. At the American Planning Association’s National Planning Conference in May 2021, one panel discussed how reforms and revitalization efforts are centering equity to redress the continuing effects of past discriminatory policies. The three panelists were all from Detroit’s Planning and Development Department (PDD): Katy Trudeau, PDD’s acting director; Jermaine Ruffin, the office’s associate director; and urban planner Allen Penniman. Panelists discussed Detroit’s Strategic Neighborhood Fund (SNF), a $130 million public-philanthropic venture to use targeted, community-informed investments to realize a vision of inclusionary growth and opportunity.

After reviewing the legacy of racism in the urban development of Detroit, Penniman showed how, despite challenges such as redlining, racial terrorism, disinvestment, and highway building through African-American neighborhoods, progress in the second half of the 20th century helped build a significant African-American middle class in Detroit, only for those residents to see significant losses of wealth during the recession of 2007 to 2009, including foreclosure on 130,000 Detroit homes. When collapsing tax revenues forced the city into bankruptcy, it also presented an opportunity for change, says Penniman. Reforms empowered the planning department to undertake long-term planning. The city also gained the capacity to use full entitlement funding from the U.S. Department of Housing and Urban Development (HUD) rather than returning the unused funds to HUD. Finally, bankruptcy allowed the city to float bonds, which Penniman characterized as crucial to the city’s rebirth and critical to the operation of SNF. Penniman describes SNF as a deliberate effort to ensure that the city’s redevelopment extends opportunities to all residents and to counteract the pressures of displacement and gentrification.

Launched in 2016, SNF has, over 2 rounds, targeted 10 neighborhoods for stabilization and growth, selecting areas most likely to benefit from local, place-based investments. The fund is intended to be leveraged, with Penniman reporting that the fund has attracted $113 million in private equity and debt on top of the $56 million in philanthropic grants and $59 million from the city. Trudeau says that the underlying strategy for SNF — investing in public good infrastructure such as street and lighting improvements alongside investment in commercial and residential projects, with public funds leveraging philanthropic dollars — was born out of pre-SNF efforts that neglected the infrastructural improvements that attract people to the area around single developments and whose impacts were more limited.

The funded projects, which have been diverse and numerous, have included affordable housing, commercial and mixed-use developments, streetscape improvements, neighborhood stabilization initiatives, and investments in parks and plazas. The city has also pledged to preserve 10,000 units of affordable housing whose affordability restrictions are set to expire. SNF, says Penniman, often dovetails with programs such as the Detroit Economic Growth Corporation, blight remediation, and the Affordable Housing Leverage Fund to make strategic interventions that, with the input of the community, can initiate a cycle of inclusive growth. According to Ruffin, the community engagement that SNF has undertaken has been crucial for assuring residents that acknowledging and addressing past injustices are central to the fund’s redevelopment goals and that fund investments reflect the expressed needs of each neighborhood.

Trudeau reiterated the need for SNF to focus on equity, uplifting historically marginalized residents by preserving affordable housing and investing in the streetscapes and in the primarily African-American owned businesses lining the target neighborhoods’ commercial corridors. By both preserving and investing in residents, says Trudeau, SNF can stabilize and ultimately help these communities grow and attract new residents, thereby expanding the city’s tax base. Panelists agreed that Detroit offers lessons to planners and policymakers even in cities with more active housing markets; in particular, the need to make space for community members to articulate which resources are best applied to a neighborhood’s particular needs and the importance of following through on those commitments. According to a University of Michigan study, residents from the first round of SNF sites, where program interventions have had more time to mature, report rising property values without fear of displacement, an increased sense of neighborhood attractiveness, increases in the number of businesses and new residents, an elevated sense that the city is working to improve their lives, and increased feelings of safety in their neighborhood.