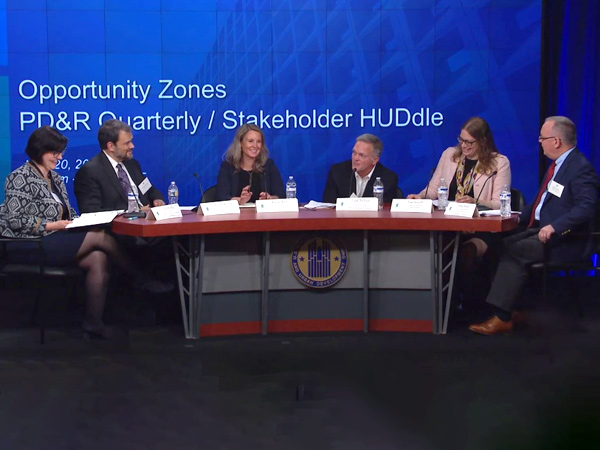 The June 20 PD&R Quarterly/Stakeholder HUDdle, moderated by Erika Poethig (left), featured a panel discussion on Opportunity Zones that focused on maximizing the benefits of investments in disadvantaged communities.

HUD’s Office of Policy Development and Research (PD&R) held its regular Quarterly Update on June 20, 2019, at HUD headquarters in Washington, DC. In addition to presenting key findings on the state of the U.S. housing market, the event featured a panel discussion on Opportunity Zones that focused on maximizing the benefits of investments in disadvantaged communities. Moderated by Erika Poethig, vice president and chief innovation officer at the Urban Institute, panelists included Michael Kressig, partner in the St. Louis office of Novogradac; Rachel Reilly, director of impact strategy at the Economic Innovation Group; Frank Dickson, director of strategic business initiatives at the Maryland Department of Housing and Community Development; Fran Seegull, executive director of the U.S. Impact Investing Alliance; and Robert Stoker, professor of political science at George Washington University.

Despite the recent overall growth of the American economy, economic opportunity in the United States is not evenly distributed geographically. To address some of these disparities, the 2017 Tax Cuts and Jobs Act authorized the creation of Opportunity Zones — census tracts designated by the governor in each U.S. state and territory that historically have lacked adequate capital flows; in these zones, tax incentives are used to promote community development through private-sector investment. A number of investment activities can qualify for the incentives, allowing developers to tailor projects to the strengths and needs of each zone. Following the Treasury Department’s recent completion of a second round of regulation writing, the first significant wave of Opportunity Zone investment activity is set to take off, according to Kressig. Seegull described this as a pivotal moment in which stakeholders have the unique ability to shape Opportunity Zone markets at their inception.

A Diverse Toolbox of Solutions

Reilly cited additional examples of the types of projects communities and investors can pursue. “Smart investment is data-driven, community-informed investment,” said Reilly, praising the efforts of Birmingham, Alabama, to educate community members on Opportunity Zones and empower residents to identify investment priorities. Community engagement, says Reilly, is key to ensuring that Opportunity Zone investments yield equitable outcomes. Reilly cited two examples to highlight how housing can be an effective vehicle for Opportunity Zone investment. In Appalachia, one project is producing affordable student housing, which allows residents better access to higher education. In Memphis, Tennessee, an Opportunity Zone designation has enabled the Tennessee Housing and Development Agency to launch a lease-to-own program that provides tools, including mortgage assistance and borrower education, to increase access to homeownership.

Although these diverse approaches to Opportunity Zone development can be powerful, they can also pose a challenge. From the perspective of good government, the flexibility of Opportunity Zones can count as a strength. Policymakers can combine the incentives the zones offer with various investment types and leverage a range of policy tools as part of a development strategy that targets the needs and ambitions of a particular community. Stoker noted, however, that from an evaluation perspective, the lack of consistency in program design and objectives across the Opportunity Zones will make a rigorous understanding of effective strategies for community development a significant challenge. He pointed out that studies of the effectiveness of past efforts at tax-incentivized, place-based development have been inconclusive, and he emphasized the importance of thorough data collection.

Some members of the impact investment community are working to ensure that such standards are developed and implemented. Seegull discussed her organization’s efforts to work with the private sector to develop a consistent national approach to impact accountability, describing a series of meetings aimed at articulating key investment principles. The tenets that emerged from these discussions centered around ensuring that authentic community engagement surrounds decisionmaking about investments; that market formation, aided by robust data, is both efficient and reaching the most distressed communities; that evaluation criteria are flexible and applicable to a broad range of markets; and that these private-sector standards are undergirded by a federal standard. From those conversations emerged strategies for tracking impact and promoting equity across the investment lifecycle. “We fundamentally believe that responsible community engagement can [not only] improve [the] community outcomes of some of these investments but also mitigate risk and drive financial return,” Seegull said. She reported that in Alabama and Cleveland, local organizers are already developing project identification tools using this framework. She also noted that some managers of impact-driven funds have adopted the data reporting recommendations.

As activity around Opportunity Zones shifts into high gear and projects are taking shape, questions remain. Developing rigorous reporting and data collection standards in the implementation of Opportunity Zones might help policymakers ensure that their community development efforts are well-tailored and effective. Meanwhile, principled investment decisions made with meaningful community input and encouraged by thoughtful public policy have the potential to transform some of the nation’s neglected places. Finally, as the panelists demonstrated, the voices of a variety of stakeholders will be crucial to achieve success through Opportunity Zone development projects.