Filling the Gaps in Housing 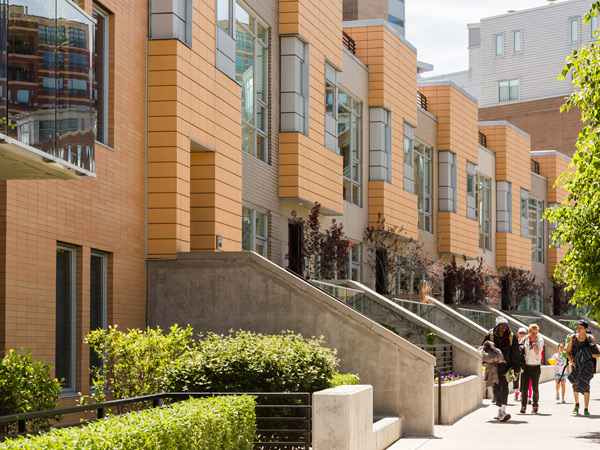 Housing types such as townhouses, duplexes, and accessory dwelling units help meet the need of millennials and other medium-income households for affordable family homes in walkable, amenity-rich urban areas.

Urban areas with plentiful employment opportunities, higher median wages, and a wide range of amenities are attractive destinations for millennials. But in many such desirable metropolitan areas, the high cost of single-family housing and the lack of other affordable housing options can drive away millennials who want to settle down and start families. This shortage of medium-density housing and potential solutions — particularly in Washington, DC — were highlighted during a panel discussion at an Urban Land Institute Washington Real Estate Trends conference held on April 25, 2017.

The panel noted that for urban areas to continue to attract and retain millennials, more “missing middle” housing is needed. The phrase “missing middle,” coined by architect Daniel Parolek, refers to housing built at densities of 16 to 50 dwelling units per acre and includes housing types such as accessory dwelling units (ADUs), live-work units, townhouses, fourplexes, and courtyard apartments. These housing types, which typically are more affordable than single-family homes, meet the needs of not only millennials but also seniors, who may be on fixed incomes, as well as other medium-income households in high-cost urban communities.

In Washington, DC, millennials account for 35 percent of the population compared with about 23 percent nationally. More than half of the district’s millennials have a bachelor’s degree, and the median earnings for those working full time is about $54,000, 60 percent higher than the national median. According to a 2015 ULI survey of millennials living in the District of Columbia and its close-in suburbs, however, 58 percent of renters indicated that they would have to move out of the area to purchase housing that they could afford. Panelist Evan-Regan Levine, senior vice president of investments at JBG, observed that before the recession, developers built far more condominiums in the city to serve an influx of residents at entry-level prices. In recent years, however, the growing demand for townhomes has pushed the price for this type of housing out of reach of a large segment of the population. “The 20 percent downpayment on an average townhome in DC is more expensive than the entire net worth of a millennial buyer,” said Levine. Several barriers contribute to the shortage of this type of housing, including rigid land use and zoning regulations, lengthy review and approval processes, high construction and entitlement costs, and community opposition.

To build more missing middle housing at price points affordable to millennials and other medium-income families, land use and zoning policies must shift to allow higher densities and different design typologies, noted the panelists. In urban cores with a shortage of buildable land, allowing ADUs and duplexes by right in existing single-family zones is one way to increase density without significantly altering neighborhood character. Proposals to increase densities in single-family and other low-density zones, however, are often met with strong opposition from residents. To overcome such resistance, panelist Harriet Tregoning, former principal deputy assistant secretary of HUD's Office of Community Planning and Development, called for better educating residents and “changing the narrative” to present the provision of affordable housing as a necessity and a shared public responsibility. Ensuring that the scale and design of new infill housing is compatible with the existing built environment can also significantly allay resident concerns.

Cities across the country are working to revise their zoning codes to allow missing middle housing types. In Austin, Texas, where single-family homes and large multifamily developments currently dominate the residential landscape, the city is proposing changes to its Land Development Code that will allow more types of missing middle housing with streamlined review processes. The city of Portland, Oregon, is exploring changes to its single-family zoning rules to allow smaller housing units and alternative housing options, such as secondary ADUs, to increase the amount and diversity of housing.

Some of the other solutions described by the panelists to increase the supply of diverse housing types include implementing flexible zoning, which allows a variety of uses and densities within projects, and redeveloping surplus commercial spaces into residential or mixed-use developments. Levine noted that a promising approach for cities is to allow residential development in certain light industrial zones with compatible uses such as commercial kitchens or food preparation facilities.

As telecommuting becomes more common, residential spaces that serve multiple purposes and neighborhoods that support a wide range of amenities resonate with millennials, noted Tregoning and panelist Rohit Anand, principal at KTGY Architecture + Planning. Levine observed that in addition to multiuse spaces, flexible floor plans that can be adapted to meet the evolving needs of millennial households are desirable. For example, housing types such as flats over rental units can offer millennial buyers supplemental income, and the rental units can be converted into additional living areas or extra bedrooms as their families grow. This flexibility also reduces the number of moves and related transaction costs for homeowners. In this respect, the versatility of Washington’s stock of rowhomes can be particularly advantageous, noted Tregoning.

Missing middle housing types fill a gap in the housing spectrum in high-cost urban locations. They help meet the growing need of millennials and other medium-income households for affordable family homes in walkable, amenity-rich neighborhoods. Flexible land use and zoning policies and creative design solutions to increase the number of diverse housing options can ensure that cities remain inclusive and economically competitive by drawing in and retaining millennial households.