On February 6, 2020, Assistant Secretary Seth Appleton, Deputy Chief of Staff Coalter Baker, and I traveled to Riyadh, Saudi Arabia, to sign an official Memorandum of Understanding (MOU) between the Saudi Ministry of Housing and HUD. This event represents an almost 3-year-long effort to formalize an official MOU between our two ministries. The effort began in early 2017 with a visit from a Saudi Ministry of Housing delegation to the United States. The delegation was led by their minister, Majid Al-Hogail, who met with Secretary Ben Carson. Following that meeting, our HUD team provided a daylong agenda that included briefs on our programs and a visit to public housing.

During our visit, Saudi ministry staff outlined their programs to provide more affordable housing and financing to a growing market of middle- and low-income Saudis. Officials from the Saudi Ministry of Housing and other related agencies also asked to learn more from our agency — in particular, how the U.S. government backs the mortgage market and how we are dealing with affordable housing production.

The U.S. Embassy staff in Riyadh provided an overview of the Saudi housing and mortgage market. They noted that the Ministry of Housing subsidized 165,000 new mortgages in 2019, up from about 60,000 the year before. Generous subsidies of up to 100 percent of the interest on the loan are also available for families earning less than $4,000 a month. He also noted that the goal of the Ministry is to increase the homeownership rate from 50 percent (as of 2016) to 70 percent by 2030. 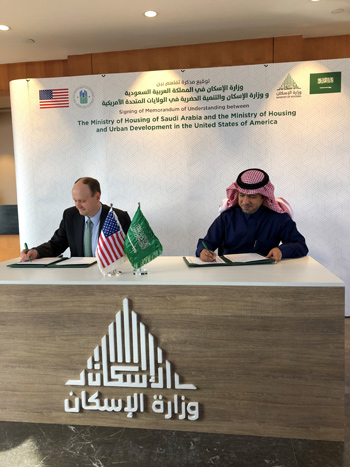 Minister Al-Hogail also discussed the Saudi Vision 2030 project, which is a plan to diversify the country’s economy from an oil-based economy. The plan includes developing public service sectors such as health, education, infrastructure, recreation and tourism. In fact, Saudi Arabia recently opened the country to tourism. Before late 2019, you could not visit the Kingdom of Saudi Arabia unless you were traveling to Mecca for the Hajj, which is still strictly controlled.

One example of tourism opening up in Saudi Arabia is the development of the historic village of Ad-Diriyah, a UNESCO World Heritage Site in Riyadh. Ad-Diriyah is an original mud brick village located in the Hanifah Valley. The site is not officially open yet but can be viewed from the street, and we drove by the site between meetings. This project is part of an effort by the Saudi government to increase worldwide interest in tourism in Saudi Arabia.

I also noticed that women are no longer required to have a male escort while they are out shopping in the city. It was also heartening to see women in the workforce in the Ministry of Housing. During our meeting with Minister Al-Hogail, two women were present at the briefing event, albeit on the sidelines. Women are required to wear an abaya (cloak) over their clothing and a hijab (head covering) at work. Western women are not required to wear an abaya or hijab.

The next steps in the MOU will be to invite our Saudi Ministry of Housing counterparts to the United States to learn more about our housing programs and to give them a more in-depth overview of our government-backed mortgage programs.