Neighborhood Change: Tools for Getting an Early Look at Change

Newton’s first law of motion states that a body at rest tends to remain at rest, and a body in motion tends to stay in motion.

This law also appears to apply to neighborhood change. Most neighborhoods experience very little change in demographics or in total units from year to year, but when they do start to change, they seem to stay in motion for a while. In the context of this post, change is defined as an increase or decrease in population or a demographic shift.

Whether you view these changes as “good” or “bad” depends on whether the change benefits you. The job of folks who develop public policy is to look out for those who are not benefiting from these changes.

Two issues are on my mind right now when it comes to measuring neighborhood change, those two issues are:

In the arena of measuring neighborhood change, it is well established to use the Census Bureau’s census tract level data from the American Community Survey (ACS) and comparing two time periods to measure change. Any effort to look at neighborhood change should always start with the ACS. However, if the neighborhood is rapidly changing, the ACS data at the census tract level have two limitations. First, the most recent data, which provide an average character of the neighborhood between 2013 and 2017, captures very little, if any, of the neighborhood’s changes within the past 2 to 3 years and may not reflect current conditions. Second, they are sample data, so the estimate involves a margin of error.

To help solve for this problem, the Office of Policy Development and Research (PD&R) makes data available on huduser.gov that are both current (updated at the end of every quarter/year) and accurate (because they are 100 percent data, they are not subject to sampling error). They are, however, limited to just a few variables. Policymakers can make use of those variables in several ways:

The rest of this post provides some examples of how to use the USPS vacancy and HUD Picture of Subsidized Households data to measure current neighborhood change. The goal of this post is to encourage users to try to do this analysis in their communities. Combining the data analysis suggested below with your own local knowledge can be a very powerful tool for creating clarity around local public policies impacting neighborhood change.

Back in 2005, looking for a proxy for neighborhood blight, HUD entered into an agreement with USPS that allows HUD to aggregate USPS address data at the census tract level. HUD typically posts these data on huduser.gov (https://www.huduser.gov/portal/usps/index.html) within one to two weeks of receiving them from USPS. 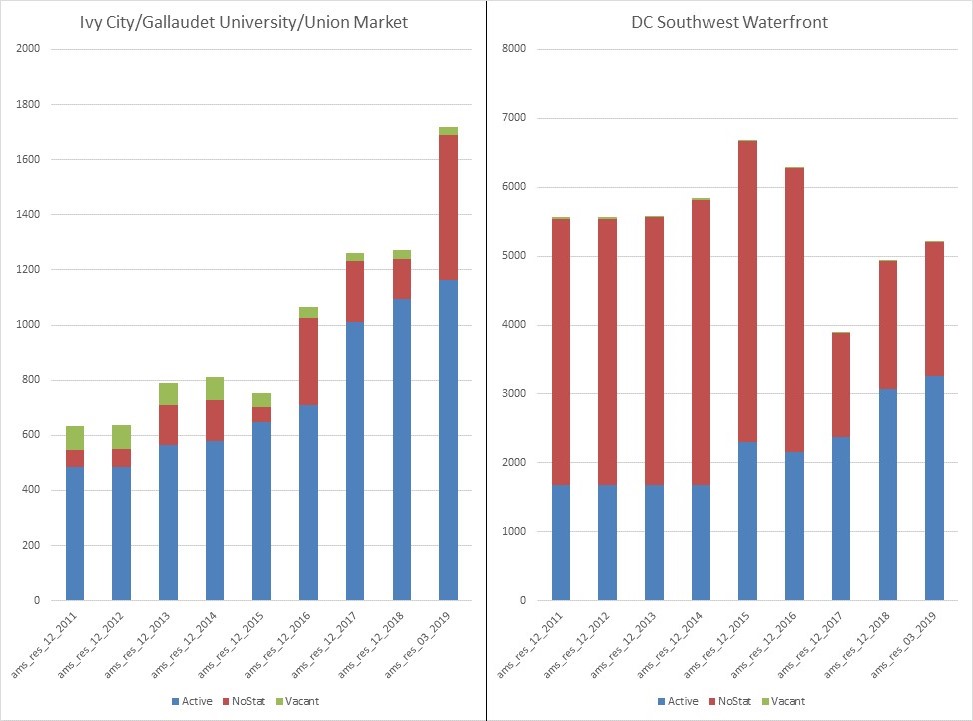 HUD makes the data accessible only to registered users affiliated with governmental entities and nonprofit organizations. Per the license agreement, use of the data is limited to “measuring and forecasting neighborhood changes, assessing neighborhood needs, and measuring/assessing the various HUD programs in which users are involved (HOME, CDBG, ADDI, and SHOP).”

The USPS data tell us about three things:

To calculate the number of active addresses — those currently receiving mail — you subtract the Vac and No-Stat data from the AMS data.

These data are aggregated to provide information on residential, business, and other addresses at the census tract level. Although this post will focus only on residential addresses, policymakers can analyze business address data using the same strategies.

Although HUD has historically used these data — in particular, the vacant address data — to examine blight, they can also be used to measure growth. Below are some examples of neighborhoods I know well. The following charts show the USPS residential addresses (active, No-Stat, and vacant) for these neighborhoods from 2011 to March 2019.

The Ivy City/Gallaudet University/Union Market neighborhood in Washington, DC, shows a very high level of growth over the past 2 to 3 years. The increasing height of the bars over time indicates that developers are requesting new residential addresses (that is, pulling building permits) that become part of the No-Stat section of the bar; as those new addresses become occupied (the blue part of the bar), more permits are pulled for ever more development. The active address count shows that the neighborhood has doubled in population since 2014 and is on track to triple its population relative to 2014 within the next 2 years.

The Southwest Waterfront neighborhood in Washington, DC, where HUD Headquarters is based, had thousands of No-Stat addresses for a long time (the red portion) before seeing an increase in active addresses (the rising blue). This trend seems odd until you learn that plans for redeveloping this area, which began in 2006, were delayed by the 2008 recession. The high number of No-Stat addresses for many years was likely a function of the many plans that were delayed or cancelled due to the recession, and the fall in No-Stat addresses in 2017 was likely the result of projects firming up and a requested change in the addresses needed. Occupancy has picked up in the past 6 months; since December 2017, the neighborhood has added nearly 1,000 occupied units. 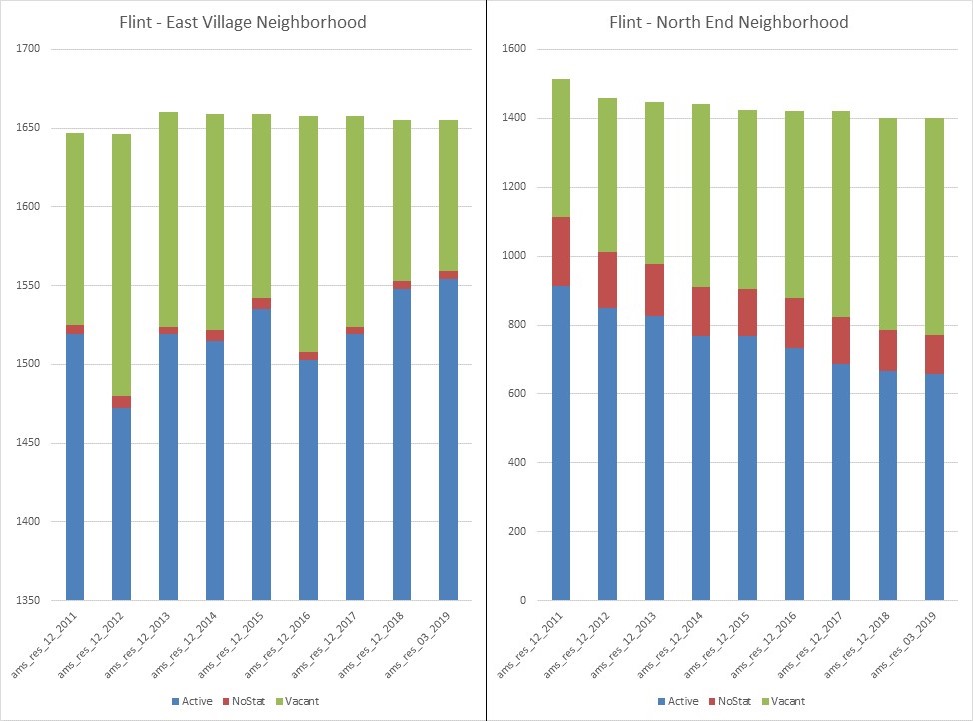 The neighborhoods in Flint, Michigan, are interesting because they are not adding any new addresses (note that the heights of the bars are nearly the same). The East Village neighborhood has long been one Flint’s most stable neighborhoods; however, the data show that this stability is fragile, with high vacancy rates (the green) and widely varying numbers of active addresses (the blue). The number of currently active addresses is on the upswing, which is a good sign.

The North End neighborhood is similar to many neighborhoods within Flint that have seen a steady fall in active addresses and an increase in vacant addresses — the blight that HUD was originally trying to understand when it first started getting these data 14 years ago. The chart shows that vacant addresses exceed active addresses in this neighborhood — something that is easy to see when driving around the city. As noted above, No-Stat addresses (the red) can indicate many things, not just active building permits. In this case, because the number of No-Stat addresses has remained constant, the No-Stat data are unlikely to reflect new building permits; rather, they are one of the other no-stat designations (see definition above).

Public housing agencies and private landlords with housing assistance contracts are required to report to HUD every time a tenant moves, or a new tenant leases a unit.

HUD has the data for the 2.3 million public housing or project-based rental assistance units, which generally change very little, but when they do, they have a significant effect on the neighborhood. See PD&R’s past research on the HOPE VI and Choice Neighborhoods programs for extensive examples.

For this post, however, I want to focus on the 2.3 million tenant-based units in the HCV program. Where these units are located can change quickly because they involve a market transaction: a tenant wants to rent a unit, and a landlord is willing to lease to that tenant.

If every census tract in the city of Washington, DC, had the same number of HCV tenants, each tract would have 66 tenants; however, that is not the case. Instead, poorer census tracts have substantially higher numbers of voucher tenants than higher-income census tracts.

In the chart below, I have included the Ivy City/Gallaudet University/Union Market and Southwest Waterfront neighborhoods discussed above and added the DC census tract average and another comparison neighborhood adjoining Ivy City called Trinidad. Trinidad has not experienced the increase in active addresses observed in the other DC neighborhoods profiled above — it has remained between 1,850 and 1,880 active addresses from December 2011 to March 2019 — but it is experiencing rapid demographic change, as demonstrated by the steep fall in voucher tenants per census tract from more than 170 in 2012 to just 71, close to the city average, in 2018. 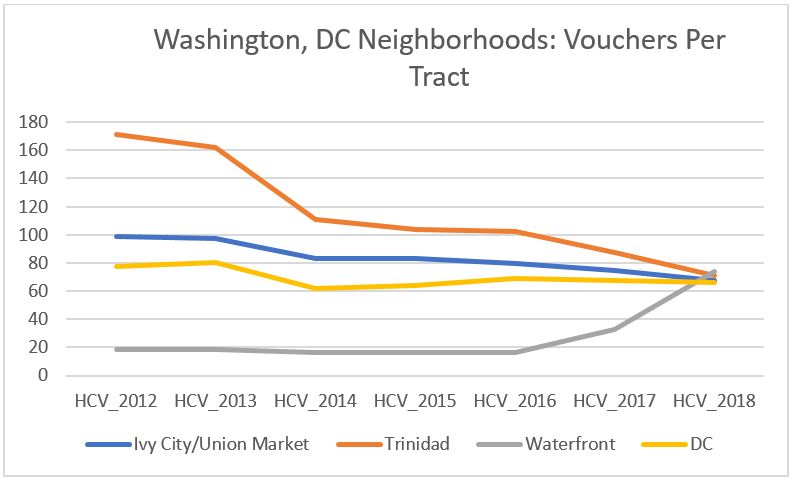 Ivy City, even with its sharp uptick in population, has seen a slight decrease in HCV tenants. By contrast, the Waterfront neighborhood has gone from a count of less than 20 voucher tenants to 74, approximately the city average. If all development in the city, across all neighborhoods, were to produce a similar convergence in the number of HCV tenants, that would likely be desirable.

However, this chart suggests two other very important observations. The first is that Trinidad is quickly losing its “naturally occurring affordable housing” — in other words, the decline in voucher tenants in the neighborhood is likely due to rising rents, and as a result, previously affordable units that were home to both voucher and non-voucher tenants are no longer available.

The second observation is that it took 800 newly occupied units in the Southwest Waterfront neighborhood to add about 60 units being leased by voucher tenants. This ratio was by design; some of the new units were required to be affordable. From a policy perspective, however, is this ratio adequate considering the city’s rent pressures? 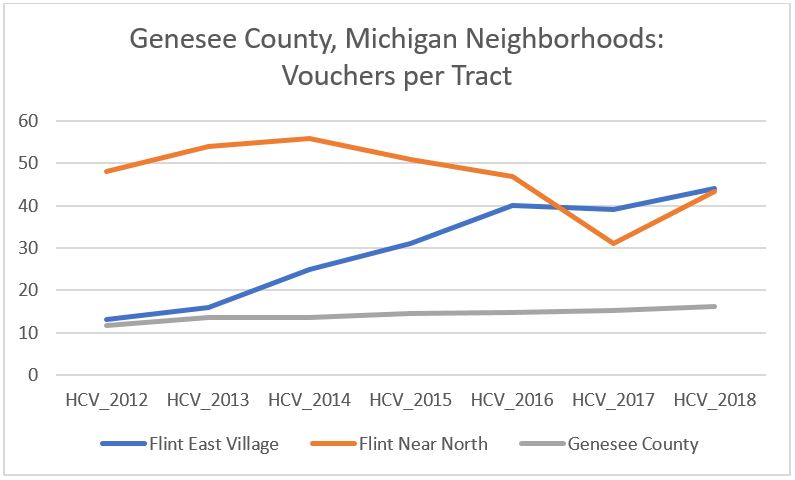 Overall, Genesee County averages approximately 16 voucher tenants per census tract. The East Village neighborhood in Flint was at roughly that average back in 2012. As the neighborhood has grown more affordable and increased its number of rental units, it has seen a sharp increase in voucher households and now has more than 40 voucher tenants.

The USPS data showed the North End neighborhood continuing to lose population. This is confirmed with the voucher data. Because voucher counts have been falling along with increasing USPS vacancy, likely blight has been worsening. The sharp decline between 2016 and 2017 may have been due to the water crisis; the recent recovery between 2017 and 2018 may suggest less concern over the water.

Users may apply to use the USPS vacancy data at www.huduser.gov/portal/datasets/usps.html.

The Picture of Subsidized Housing data at the census tract level is downloadable at www.huduser.gov/portal/datasets/assthsg.html#2009-2018_data.