A Look Back at Hurricane Katrina

In late August 2021, we received reports of a strengthening storm — Hurricane Ida — that was projected to make landfall in Louisiana. As I awaited the first reports of the damage left in Ida’s wake, I felt a familiar sensation in the pit of my stomach as I remembered the devastation wreaked by Hurricane Katrina, another storm that had a catastrophic impact on Louisiana.

Hurricane Ida struck in the same general vicinity as Katrina on the 16th anniversary of Katrina’s landfall. The flood control measures implemented after Katrina were successful and largely spared Louisiana from massive flooding. Ida did inflict considerable wind damage, however, which we are still assessing. Ida then swept across the mid-Atlantic states, causing severe flooding damage in New York and New Jersey.

As regular readers of PD&R Edge know, I have been developing allocation formulas for HUD’s Community Development Block Grant-Disaster Recovery (CDBG-DR) program since the mid-1990s, including for Hurricane Katrina in 2005. For the past 15 years, I’ve also been involved with most of HUD’s research on disaster recovery.

As we consider how communities will recover from Ida, I reviewed some research I had done in 2015 examining the previous decade of post-Katrina recovery. Long-term recovery really means that recovery can take a long time. This post is based on that 2015 work reviewing the arc of recovery following Katrina.

Hurricane Katrina remains one of the worst hurricanes in U.S. history. After gathering strength over the Gulf of Mexico, Hurricane Katrina struck Louisiana and Mississippi on August 29, 2005, eventually carving a path up the East Coast. Although New Orleans did not receive a direct hit from the storm, the levees protecting the city fell under the weight of the rain and storm surge, and by August 30, 80 percent of the city was underwater. Whether measured by lives lost, the cost of damage, or hurricane strength, few natural disasters were as destructive as Hurricane Katrina:

HUD was involved with three major programs as part of the recovery from Hurricane Katrina: the CDBG-DR program, the Disaster Housing Assistance Program (DHAP), and the redevelopment of New Orleans Public Housing.

CDBG-DR Funding. As with most natural disasters, FEMA, along with state and local agencies, spearheaded the immediate disaster response to Katrina. HUD then funded state and local partners through the CDBG-DR program to assist with long-term recovery efforts that would span more than a decade. HUD distributed nearly $20 billion through the CDBG-DR program for hurricanes Katrina, Rita, and Wilma. As shown in the state-by-state breakdown below, most of the CDBG-DR funding was allocated to Louisiana, followed by Mississippi.

The beauty — and the challenge — of CDBG-DR funding is its flexibility. This flexibility allows communities to design programs that fit their specific recovery needs (with certain requirements, such as income restrictions). CDBG-DR funding can be used to build or rehabilitate owned or rental housing; rebuild businesses; foster economic development; support infrastructure recovery; or build new schools, hospitals, and sewage systems — and it was used for all of these activities and more after Hurricane Katrina. 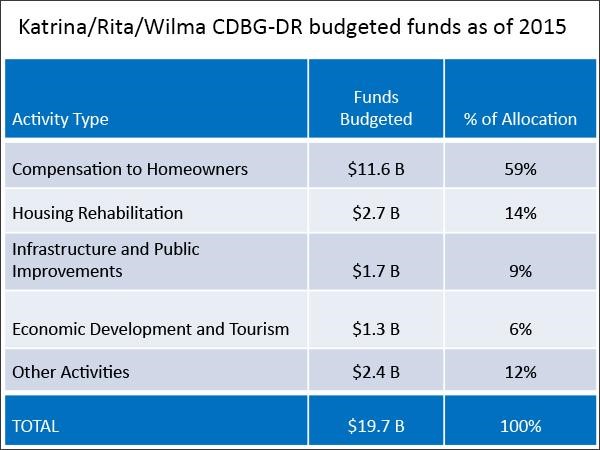 CDBG-DR’s flexibility, however, requires communities to design their own programs and build their own infrastructure to run the program, usually from scratch — a particularly daunting task when tens of thousands of displaced families in desperate need are waiting for assistance, physical infrastructure such as office space is unavailable, and available data lag behind reality.

The largest single CDBG-DR program was Louisiana’s Road Home program, which provided homeowners with substantial grants to cover the gap in recovery funding left after insurance and other assistance. The Road Home program assisted 130,053 homeowners with an average award of $69,437; of these, 119,162, or 92 percent of participants, used the funding to rebuild in Louisiana.

One reason homeowners required so much CDBG-DR funding was that many of the homeowners, particularly those with flood damage, lacked adequate insurance to cover the rebuilding costs.

CDBG-DR funds, however, were used in nearly all facets of recovery. The chart below shows the distribution of CDBG-DR budgeted funds in 2015 by activity type.

Disaster Housing Assistance Program. Katrina displaced thousands of people. Nearly 2 years after hurricanes Katrina and Rita, tens of thousands of households were still relying on FEMA for housing support. HUD and FEMA created the Disaster Housing Assistance Program (DHAP-Katrina) in July 2007 to transition these hurricane-affected households into permanent housing. Administered by local public housing agencies, the DHAP program differed from HUD’s previous rental assistance subsidy programs in that it imposed no income limits, did not key payments to income, gradually reduced rental assistance payments to give households greater responsibility for their housing costs over time, and provided case management services. Over the life of the program, HUD and FEMA assisted 36,000 households. 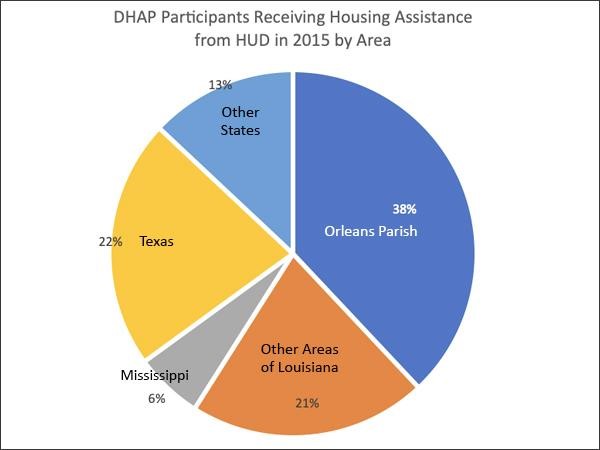 Population Recovery in New Orleans. Katrina showed us that population can take a long time to rebound after a catastrophic event, and it may never rebound to its pre-disaster levels. Population declines create cascading effects throughout a community, affecting the local economy, the school system, the availability of community assets, and many other facets of community life. Therefore, tracking population changes immediately after a disaster and during the recovery stage is critical. According to the 2000 census, New Orleans had a pre-Katrina population of 484,674. After widespread displacement and a deep dip in population following the hurricane, New Orleans had an estimated population of 391,495 in 2016. 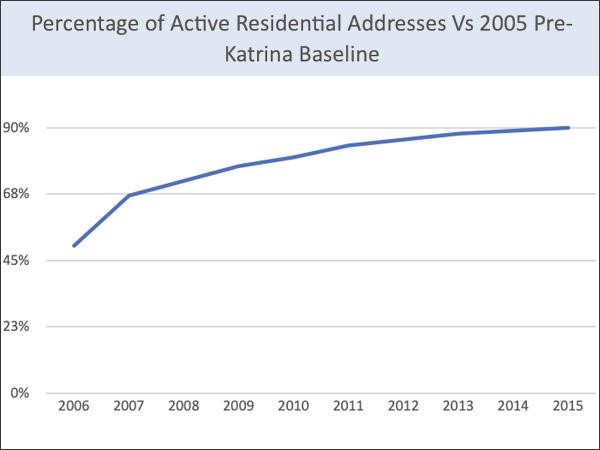 My take on this arc of recovery is that the first bump through mid-2007 came from individuals who had adequate insurance or were able to rebuild enough to live in their homes during the launch of the Road Home program. The rebuild from years 3 to 7 was slower as many families struggled to manage reconstruction and others still lacked resources.

Recovery by Neighborhood. Recovery rates following Katrina varied substantially by community, with recovery driven largely by the severity of damage and the availability of resources. The more severe the damage in a neighborhood, the longer the neighborhood took to rebuild and the greater the likelihood of not rebuilding. Recovery speed was even worse when the damage was concentrated over an entire neighborhood. In addition, having inadequate or no insurance slowed the recovery process by years. As I mentioned in an Edge article from 2014, even with significant federal government investment in recovery after Katrina, households with insurance were much more likely to have recovered than those without insurance, with 75 percent and 48 percent, respectively, recovering within 5 years of the disaster.

In 2011, we surveyed property owners who had not yet rebuilt. The respondents’ top two reasons for not rebuilding were not having enough money to do the work (67%) and not being able to get a loan to complete the work (51%). Another interesting tidbit from the 2011 survey was property owners’ satisfaction with their current home. Those who chose to rebuild had approximately the same level of satisfaction as those who had moved. Those who moved elsewhere, however, were much more satisfied with their neighborhood than those who chose to remain and rebuild, with 70 percent and 48 percent of respondents, respectively, reporting themselves as being “very satisfied.”

More reading. The following is a sampling of some of PD&R’s recent disaster-related research:

It is still very early in the arc of recovery for Hurricane Ida. For many of the communities impacted, long-term recovery will take years.

U.S. Department of Housing and Urban Development. 2015. “Hurricane Katrina: By the Numbers.” ×

The Data Center. 2021. “Monthly population indicators through 2020 by ZIP and parish for the New Orleans metro.” ×