I was recently in Stuttgart, Germany, to attend the 13th Federal Congress on National Urban Development Policy, hosted by Germany’s Federal Ministry of the Interior, Building and Community (BMI). This annual conference is attended not only by German government officials but also by international officials. The conference is an opportunity to discuss pressing urban development issues and to hear what Germany is doing to address housing issues. Representatives from South Africa, Ukraine, India, and Brazil also attended the conference. I participated in several sessions as well as a full-day workshop called “Institutionalizing Peer Learning and Updating the Leipzig Charta as Success Factors for Achieving the Sustainable Development Goals.” This workshop was a followup to our continuing partnership with the German Marshall Fund of the United States’ (GMF’s) Dialogues for Change initiative. This initiative is a partnership among HUD, GMF, BMI, and the Deutsche Gesellschaft für Internationale Zusammenarbeit — another HUD counterpart. Dialogues for Change was a transatlantic network of city official participants who explored cross-cutting themes critical to the successful implementation of urban development projects. Six cities participated: Baltimore, Maryland; Charlotte, North Carolina; and Pittsburgh, Pennsylvania, in the United States and Bottrop, Karlsruhe, and Leipzig in Germany. City planners from each city participated in workshops held every 6 months in alternating countries. Dialogues for Change ended in 2018; we are currently on a 1-year break and hope to restart the partnership in 2020. 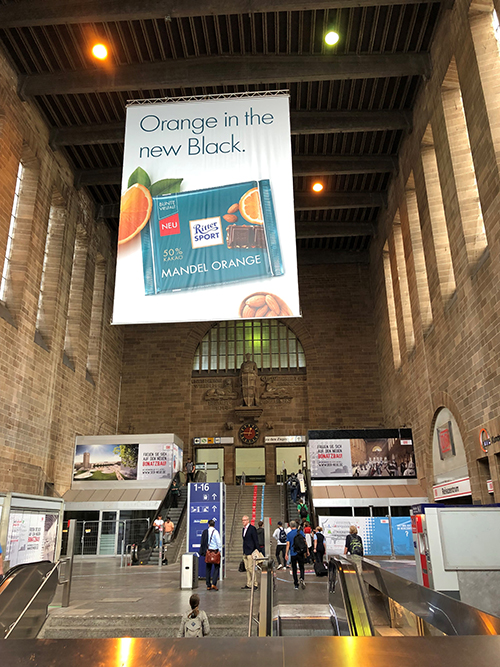 I also met with BMI staff to discuss updating our United States/Germany memorandum of understanding (MOU). The current MOU was signed several years ago, and the time is right to update it with new joint research on issues both countries are facing, such as the shortage of affordable housing stock. The conference was also a great opportunity to hear from ministry officials from other countries such as South Africa, which had a large delegation attend. South Africa is struggling with severe housing shortages and the residual effects of segregation stemming from apartheid. 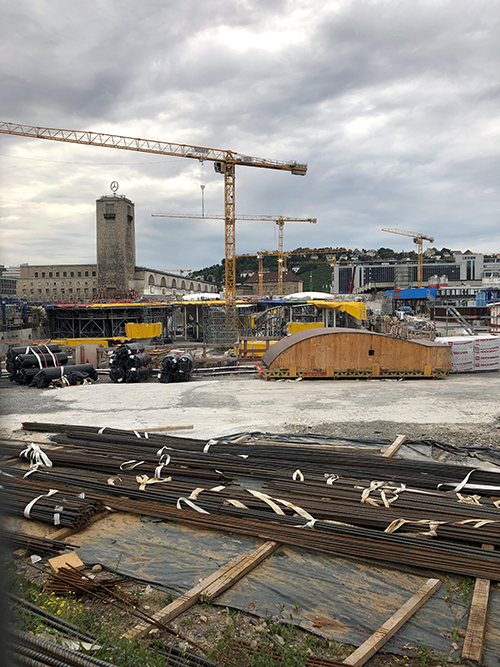 Each day I walked 3 miles from my hotel to the conference venue and back. This walk took me through the construction zone of one of Germany’s largest infrastructure projects, the Stuttgart train station project, known as Stuttgart 21. I also went on a walking tour of the project with one of Stuttgart’s city planners. The train station, which was originally built between 1914 and 1928, suffered major damage during World War II. Mercedes-Benz helped fund the reconstruction, and their logo can still be seen at the top of the main station tower. The plan is to run the train tracks underneath the station, which requires a massive tunneling project similar to Boston’s Big Dig. Currently, 17 tracks enter the station; these will eventually be replaced with 8 underground tracks for through trains, which will eliminate the need for additional tracks. The project will also add a new high-speed line. Construction began in 2010 with an overall cost not to exceed €4.5 billion euros. The project has encountered costly delays and cost overruns, and recent estimates place the final cost at approximately €7.6 billion euros, or $8.3 billion. By comparison, the San Francisco Transbay Transit Center cost $2 billion to construct, and the World Trade Center Transportation Hub cost $4 billion. 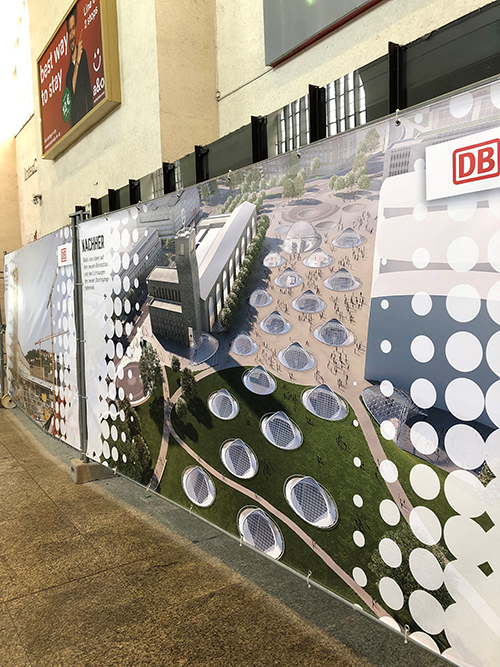 To carry out the massive tunneling effort and reconfiguration of the tracks, part of the adjacent city park, Schlossgarten (Palace Park), had to be taken. The reconfiguration involved removing more than 200 trees from the park. Many Stuttgart residents have not been happy with the project, not only because of the aesthetic controversy (in addition to removing trees, the project required destroying part of the original station) but also because of the enormous costs incurred. Residents were also concerned that the tunneling could affect the water system; Stuttgart is known for its mineral spas. Residents have protested against the project since its inception, with one protest in October 2010 attracting an estimated 100,000 protestors. Protests are still held every Monday even though the project is well underway.

To bring natural light into the now-underground station, huge skylights will be installed in the ceiling. These massive skylights will be incorporated into the outdoor space behind the station, which is adjacent to the city park. These massive aboveground portals will be integrated into the park with open green space and replanted trees. The very modern design will present a stark contrast to the original station design from the early 20th century. I’m looking forward to seeing the completed Stuttgart station.