Insurance to Mitigate the Impacts of Disasters or Fund Disaster Recovery 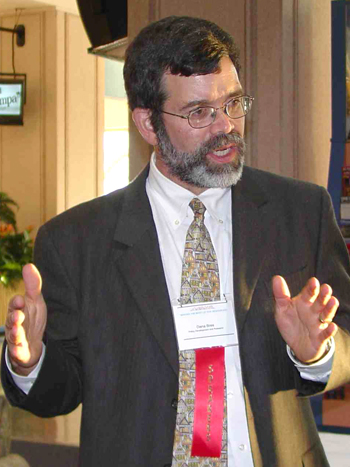 Following natural disasters, homes and communities that have been damaged require resources for their recovery. Disasters impact the built environment without regard for the ownership of individual assets, whether private residential, commercial, or industrial structures; public buildings; or infrastructure. At some level, owners are responsible for a significant portion of their postdisaster recovery. Funding for postdisaster recovery may come from various sources: savings, loans, insurance, philanthropy, or federal assistance. Although this discussion uses Hurricane Harvey in Texas as an example, this information is applicable to other disasters elsewhere.

Although we often think of HUD and the Federal Emergency Management Agency (FEMA) as primary sources of disaster relief and recovery, the amount of assistance from those sources is comparatively small. Following Hurricane Harvey in 2017, FEMA approved $1.66 billion in assistance through its Individuals and Households Program and $1.96 billion through its Public Assistance Grant Program. In addition, HUD allocated $5.68 billion in Community Development Block Grant Disaster Recovery (CDBG-DR) funds for Texas.

Obviously, individual and organizational savings (and loans) used for recovery would increase that amount, but those sources were less visible. The distribution of the assistance is shown in the chart below.

Insurance played a significant role in the recovery financing, with $16.2 billion, or 61 percent, of the total identified assistance. The National Flood Insurance Program accounted for 45 percent of the total insurance amount. The remaining 55 percent of the insurance amount involved dwelling, commercial, and automotive policies. The chart below does not reflect the resources from savings or loans. 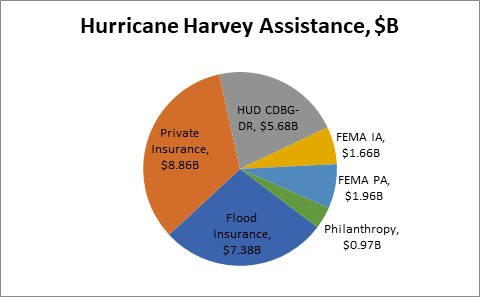 Regardless of the inconsistency in the insurance coverage statistics, insurance is an essential part of a disaster recovery strategy. A study by HUD’s Office of Policy Development and Research of the impact of CDBG-DR grants after Hurricane Katrina reported, “Insurance is estimated to have a large and highly significant relationship with rebuilding; insured properties are 37 percent more likely to have been rebuilt than uninsured properties.”

Flood insurance is another key element of disaster recovery for many property owners. The National Flood Insurance Program reports that about 5.1 million flood insurance policies are in force nationwide, which represents a comparatively small portion of the 135 million total housing units in the United States; however, we must remember that most of the nation’s housing is not located in a designated Special Flood Hazard Area, or flood zone. FEMA recognizes that an insurance gap exists in which many people whose properties are at risk of flooding don’t have flood insurance. To that end, FEMA has identified a “moonshot” goal of doubling the number of property owners covered through the National Flood Insurance Program by 2022. The availability of flood insurance is essential to speedy recovery because homeowners insurance typically doesn’t cover flood damage. Like homeowners insurance claims, flood insurance claims are settled more quickly and comprehensively than other forms of assistance.

Insurance plays a significant role in disaster recovery because it responds to need with greater certainty and speed than other forms of assistance and offers larger financial payouts to support recovery. At the risk of prescribing actions, suggesting that all residents carry insurance appropriate for the risks they face is reasonable.

Although this article describes several sources of funding for disaster recovery, the role of insurance can’t be overstated. Because of the direct relationship between the resident (the insured) and insurance company, resources can be focused on the most critical needs of the disaster survivor. This will provide the greatest flexibility for the recovery of the individual and, ultimately, the community.