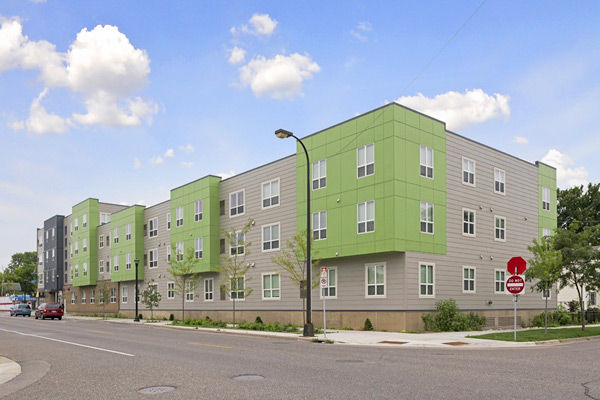 In January 2016, developer Building Blocks held the grand opening for the Commons at Penn Avenue, a mixed-use development served by several current and planned public transportation lines in the Willard-Hay neighborhood of north Minneapolis. All 47 units at Commons at Penn are affordable to households earning up to 50 percent of the area median income, and the development offers afterschool and summer programs for resident youth. The development is also bringing fresh food to an underserved neighborhood with a grocery store, Wirth Co-op, in the building’s first floor.

Commons at Penn fulfills the affordable housing and community development vision of Devean George, founder and executive director of Building Blocks and a former basketball player with the Los Angeles Lakers who grew up in North Minneapolis. In 2014, George purchased two city-owned parcels at the southwestern corner of the intersection of Penn Avenue and Golden Valley Road. The developer combined those parcels with three adjacent parcels already owned by Building Blocks to create a site large enough to accommodate its first development, a 34,000-square-foot, 4-story, mixed-use building. According to Scott Anderson, principal at Green Tree Consulting and a consultant for Commons at Penn, Building Blocks conducted door-to-door neighborhood outreach and coordinated with the Northside Residents Redevelopment Council, a nonprofit neighborhood organization, to ensure that the development met community needs.

Incorporating comments from community members, Mobilize Design and Architecture designed a building with 47 units of affordable housing, space for social services, and a grocery store. The residential portion of Commons at Penn includes 13 one-bedroom units, 21 two-bedroom units, and 13 three-bedroom units. All the apartments are affordable for households earning up to 50 percent of the area median income, and the property accepts residents with housing choice vouchers. Commons at Penn is designed to meet Enterprise Green Communities Criteria, and it features many amenities for residents including laundry facilities, a fitness center, and a community room. In addition, the property offers underground parking, bike parking, a playground, and a picnic area.

In October 2016, Wirth Co-op began to finish out a 4,000-square-foot space on the first floor of Commons at Penn as a grocery store. The cooperative, established in 2007 by a group of residents from Willard-Hay and the adjacent Harrison and Bryn Mawr neighborhoods, will support the local economy and provide fresh food options for the community. These options are important because Commons at Penn is located in a census tract that the U.S. Department of Agriculture’s Economic Research Service has designated as a low-income, urban census tract with low access to healthy food within a half-mile. Although community residents may become members and co-owners of the cooperative, membership will not be required to shop there.

Commons at Penn is easily accessible to several public transportation options. To promote use of the three bus lines that run by the site, Building Blocks constructed an integrated bus shelter as part of the development. Although these bus lines currently provide access along the Penn Avenue corridor and throughout Minneapolis, transit investments are underway to better connect north Minneapolis and its neighborhoods to the downtown and the larger metropolitan area. The city of Minneapolis, Hennepin County, and the Metropolitan Council — the regional planning agency and policymaking body for the Twin Cities metropolitan region — are in the design phase of creating the C Line, which will provide rapid bus service along Penn Avenue and into northern suburbs as early as 2019. 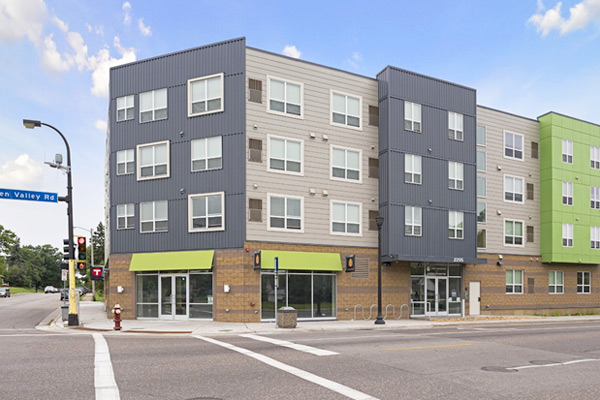 In addition to the affordable housing, Commons at Penn incorporates a 4,000-square-foot grocery store on the first floor. Credit: Mobilize Design & Architecture

The agencies are also designing an extension of a light rail line that will connect downtown Minneapolis to its northwestern suburbs as early as 2021. Known as the Bottineau Transitway or the Blue Line Extension, the planned light rail line will be 13 miles long with 11 stations including the Golden Valley Road station, which will be constructed adjacent to Minneapolis’ Willard-Hay neighborhood, approximately a half-mile from Commons at Penn.

The largest source of funding for the $11.4 million residential portion of Commons at Penn was $4 million in equity provided by the Minnesota Equity Fund in exchange for 4 percent low-income housing tax credits. In addition to awarding the tax credits, the Minnesota Housing Finance Agency allocated $1.3 million in deferred financing to the project. The city provided $1.1 million, and the Metropolitan Council provided $1 million through its Livable Communities Demonstration Account for Transit Oriented Development and $18,000 through its Tax Base Revitalization Account. Hennepin County made available $870,000 from its Environmental Response Fund, Transit Oriented Development, and Affordable Housing Incentive Fund grant programs.

Commons at Penn’s 47 units were fully leased within a few months of opening, demonstrating the need for affordable housing options in Minneapolis. In addition to providing affordable housing and a venue for local food, the development has also helped the city achieve other goals. According to Tiffany Glasper, a senior project coordinator for residential finance in the Minneapolis Department of Community Planning and Economic Development, the project advances the city’s goals of encouraging higher density redevelopment along transit corridors. Glasper notes that the development’s larger units also support the city’s goal of creating inclusive communities and accommodating larger families. In addition, according to Anderson, the development has provided more eyes on the street to help reduce crime near the bus stop.