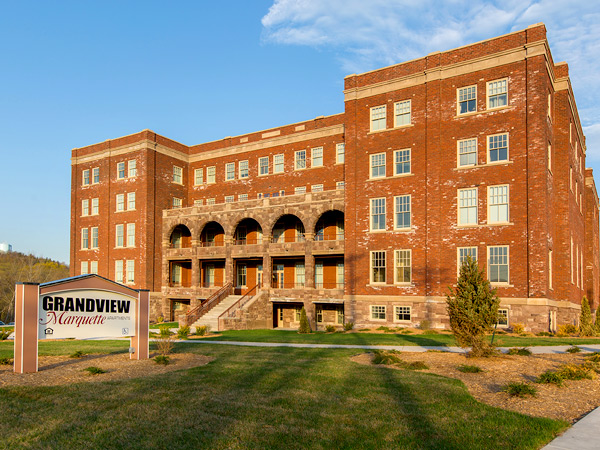 Abandoned in 1981, the Holy Family Orphanage was returned to use in 2017 as the Grandview Marquette, a 57-unit affordable apartment building. Credit: eClair Photo+Video and Home Renewal Systems, LLC.

Named for its impressive views of Lake Superior, the Grandview Marquette is an affordable apartment building that opened in 2017 in Marquette, Michigan. The five-story, red-brick building, its front façade defined by a multistory sandstone porch, began life in 1915 as the Holy Family Orphanage, a Catholic institution that served children throughout Michigan’s rural Upper Peninsula until 1965. The landmark was abandoned in the 1980s, becoming the subject of local ghost stories. After an intensive 17-month restoration beginning in 2016, the historic building now provides 56 units of affordable housing. Home Renewal Systems LLC (HRS) and Community Action Alger-Marquette (CAAM), the developer and service provider respectively at the Grandview, were recognized for their work with a Michigan Governor’s Award for Historic Preservation in 2018.

The spacious 75,000-square-foot building, which at its peak housed 200 orphans, now contains 56 affordable apartments consisting of 27 one-bedroom, 24 two-bedroom, and 5 three-bedroom units. Richard G. Ballard, a consultant for developer HRS, explains that the three-bedroom units were included after a meeting with the director of the Marquette Housing Commission, who indicated a need for the larger units to accommodate families. Each unit in the historic building is unique both in floorplan and original details. For example, one of the three-bedroom apartments built in the subdivided old auditorium is a split-leveled unit because it houses the original stage. All units are visitable by wheelchair users, and 14 are designated as permanent supportive housing units.

Eligible tenants may earn no more than 80 percent of the area median income (AMI) per year, with most units further restricted to tenants with annual incomes of 60 percent, 50 percent, 40 percent, or 30 percent of AMI. In accordance with LIHTC regulations, the average income limit for the project is below 60 percent AMI. Eight of the supportive units are part of Michigan’s permanent supportive housing program and house residents who formerly experienced homelessness, with five of these units reserved specifically for individuals coming out of chronic homelessness. The remaining six supportive units are subsidized through project-based Section 8 rental assistance and are reserved for tenants with special needs. Local nonprofit CAAM handles onsite management and partners with various local organizations to provide at least 16 hours per week of supportive services — which can include mental health assistance, services for veterans, and more — to residents of the Grandview’s supportive units.

In addition to the residential units, the Grandview includes ample common space for socializing and providing services. Notably, the building’s original chapel was restored for use as a community space. The wide hallways also serve as additional gathering places, easily accommodating furniture without impeding travel: “There’s way more common space than we need,” remarks Ballard, “but the building could easily be in the same kind of service in 200 years as it is now. It will be functionally solid essentially forever.” The building also features a bicycle storage room and office space for the building’s management.

The $16.2 million adaptive reuse project was headed by Michigan-based developer Home Renewal Systems (HRS), which purchased the dilapidated Holy Family Orphanage property from an investor in 2016. The investor had bought the property out of foreclosure, where it languished after failed plans to renovate — one of several since the administrative offices at Holy Family vacated the building in 1981. After being interested for some time, Ballard reports that the firm began seriously considering the property in 2014. Anticipating the restoration project, Ballard, HRS, and consultant Gary Scheuren moved to add the property to the National Register of Historic Places in 2015. By the time HRS obtained the building, the property had changed hands several times for promised renovations — a fact that induced some initial skepticism among Marquette residents. Ballard, however, says that the project received warm support from the community despite these reservations, and work began at the 2.1-acre site in summer 2016. 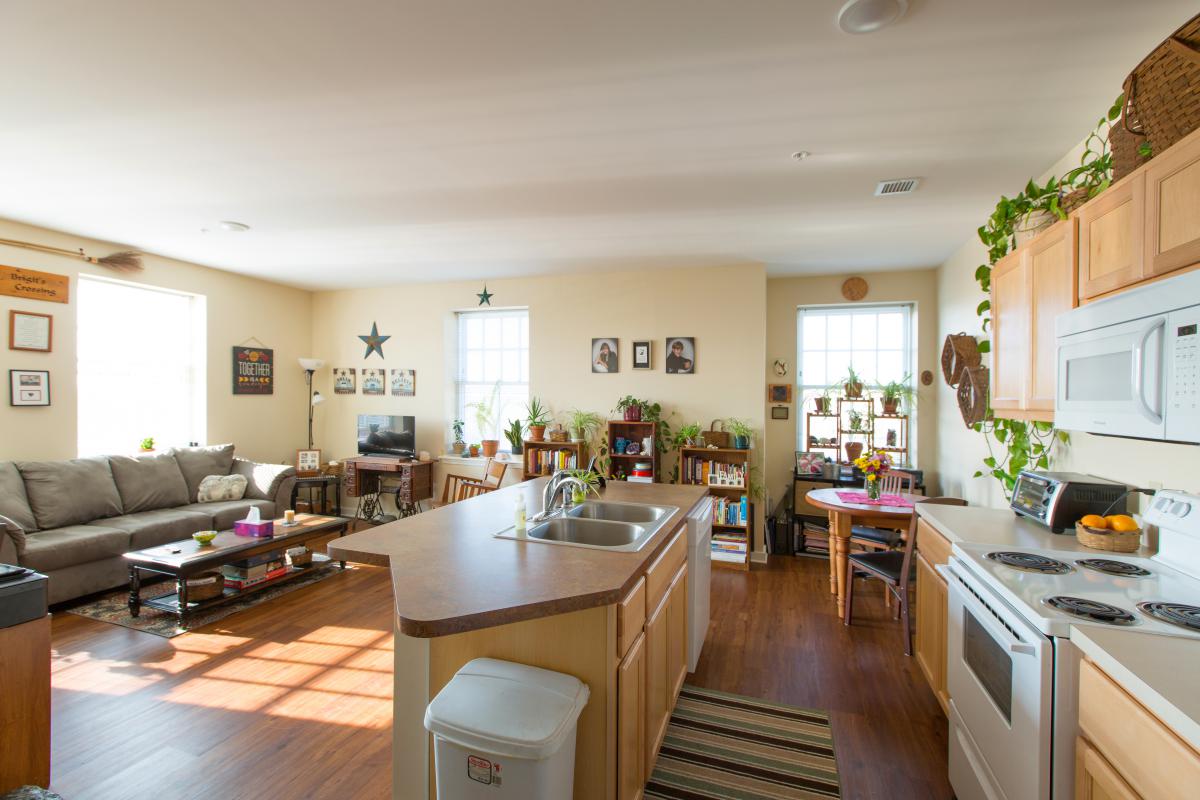 Tenants at the Grandview must have a yearly income of no more than 60 percent AMI, with 14 units reserved for participants in Michigan’s Permanent Supportive Housing program. Credit: eClair Photo+Video and Home Renewal Systems, LLC.

After nearly 40 years of vacancy, the building was badly damaged, full of environmental hazards, and inhabited by thousands of pigeons. The project also had a problem with trespassers because of the site’s prominence in local lore: “People wanted to spend one last night there, I guess,” says Ballard. The Marquette Brownfield Fund issued $25,000 to the project to perform an environmental assessment, after which the remediation effort removed approximately 1,200 tons of lead- and asbestos-contaminated material over 4 months. With the hazards cleared, general contractor Wolverine Building Group began repairing damage to the structure and replacing the building’s plumbing, electrical, and mechanical systems.

Architect Barry Polzin designed the new internal layout while maintaining the original hallways, stairwells, doorway spacing, and porch accesses. The renovation restored historic features such as the three-story sandstone porch, the building’s original chapel, the stage in the subdivided auditorium, and the terrazzo floors. The completed building, which has received Enterprise Green Communities certification, is so energy efficient that the cost of air conditioning, heat, and hot water is now included in the rent. More than 1,000 locals attended the November 2017 grand opening, eager to see the completed renovation of their long-vacant landmark.

The project was funded primarily through tax credits, including $12.77 million in low-income housing tax credit equity and $2.48 million in federal historic tax credits. The remaining $996,000 was financed through a mix of permanent debt and deferred developer fees. As is common for tax credit developments in Michigan, the Grandview received a payment in lieu of taxes agreement from the city to reduce its property tax payments.

Today, the Grandview Marquette is fully occupied, with several waiting lists for the various unit types. According to Ballard, HRS plans to continue contributing to the building, but it is currently focused on ensuring the project’s financial stability. For example, the developer hopes to someday turn the lumber removed from the site during renovations into furniture for the Grandview. After 36 years, the venerable old building is finally in use as a home once again.