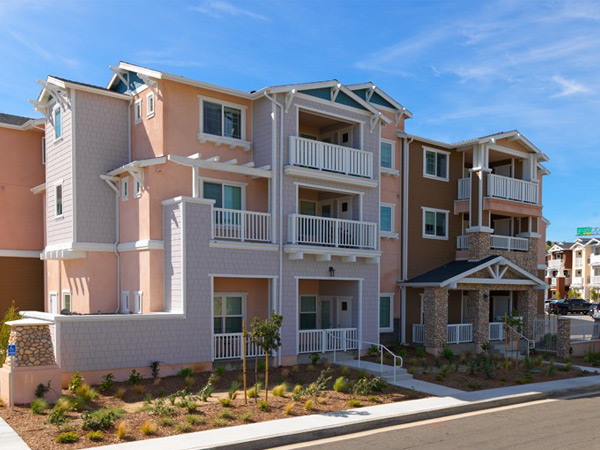 Oakcrest Heights and Oakcrest Terrace are a pair of affordable housing developments with 121 affordable apartments in the Savi Ranch neighborhood of Yorba Linda, California. Yorba Linda, located 27 miles southeast of Los Angeles, is a suburban community with strong ties to its rural roots in citrus-growing Orange County; it has a population of 68,000 and a median annual household income of more than $120,000. In response to California’s Regional Housing Needs Assessment — a state law that requires a local jurisdiction “to plan for its “fair share “of housing market demands for all economic income levels” — the city identified two parcels in the Savi Ranch neighborhood as suitable sites for affordable housing as part of its general plan to scatter affordable housing throughout the city.

Located in the southeast of Yorba Linda sandwiched between Route 91 and the Santa Ana River, Savi Ranch is a major retail and office cluster with big box stores as well as several large biomedical research and development firms. Before the development of the Oakcrest projects, Savi Ranch had no residential buildings. In 2010, regional affordable housing developer National Community Renaissance (National CORE) proposed rezoning the plots from commercial to residential use at a density of 30 units per acre. Unlike most cities, Yorba Linda requires all major changes to their planning documents to be approved by referendum. National CORE’s proposal was originally defeated by 197 votes in 2010. Each time the city contemplated the Housing Element of its general plan, however, the sites in Savi Ranch kept coming up as prime locations for the affordable housing that the city was obliged to provide.

In 2012, the Yorba Linda Planning Division moved to support the rezoning of the Savi Ranch development. Because of the suitability of the site and the close referendum results, city leaders decided to engage in a concentrated citizen outreach and education effort to address residents’ concerns about affordable housing and build support for the project.

David Brantley, community development director for the city of Yorba Linda, stressed that a major focus of that campaign was to educate residents about affordable housing. The city emphasized the community’s need for balance between jobs and housing. Brantley referenced the benefits of allowing workers earning a range of incomes to live closer to their jobs to reduce traffic congestion — a constant struggle in Southern California. In addition, the city pointed to two poorly managed apartment complexes that were converted into affordable housing, resolving many of the community’s concerns. In June of 2012, after the education and engagement campaign, the city held a second referendum and the proposed Savi Ranch amendments were approved with 60 percent of the vote.

The Oakcrest development was created in two phases on two parcels of land. The first phase, Oakcrest Terrace, opened in 2017 and consists of 69 housing units in 2 three-story residential buildings and a detached community center. All units in both developments are affordable for people making 30 to 60 percent of the area median income. Reflecting the demand for housing for larger families in Yorba Linda, 81 percent of the units in both developments are two- or three-bedroom apartments. 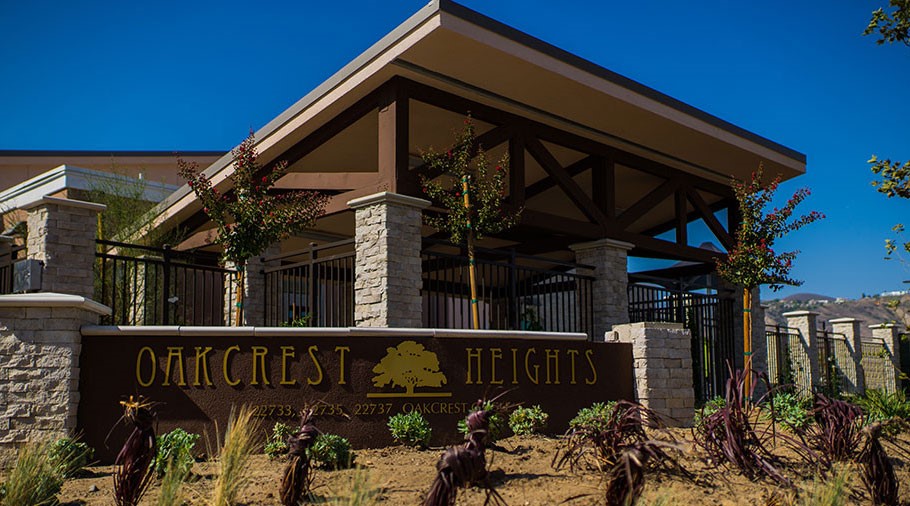 The second of the projects, Oakcrest Heights, contains 53 affordable units and an onsite preschool facility open to residents in both developments. Credit: Ryan Beck of Ryan Beck Photography

The second phase of the development, Oakcrest Heights, sits down the road from Oakland Terrace and consists of two 3-story buildings with 54 housing units. The property also includes a detached preschool and administrative facility operated by the Hope through Housing Foundation, National CORE’s partner service provider. Residents in both developments have priority access to the preschool. In addition to the preschool, residents have access to an onsite service coordinator and support in the form of financial literacy education, adult education, and health and wellness services.

Oakcrest Heights and Oakcrest Terrace were funded primarily through the sale of 9 percent low-income housing tax credit equity as well as long-term loans from the city of Yorba Linda, funding through the California Housing Finance Authority and the California Mental Health Services Act Housing Program in addition to conventional loans and developer’s capital. In 2017, the project faced a setback when National CORE’s private-sector partner pulled out of the financing deal for the construction of Oakcrest Heights. When National CORE returned to the market, it raised only 84 percent of the capital it had expected. At the last minute, the city offered an additional $2 million to fill the gap in market financing, reaching a total of $6 million in municipal funding.

Through the Savi Ranch developments, the city of Yorba Linda was able to leverage previously underutilized land in a commercial district to create amenity-rich affordable housing. Brantley reported that residents are generally pleased with the resulting projects, stating that most people do not realize that the developments are affordable housing. National CORE uses the Oakcrest projects as flagship examples of the work they can do in the region.