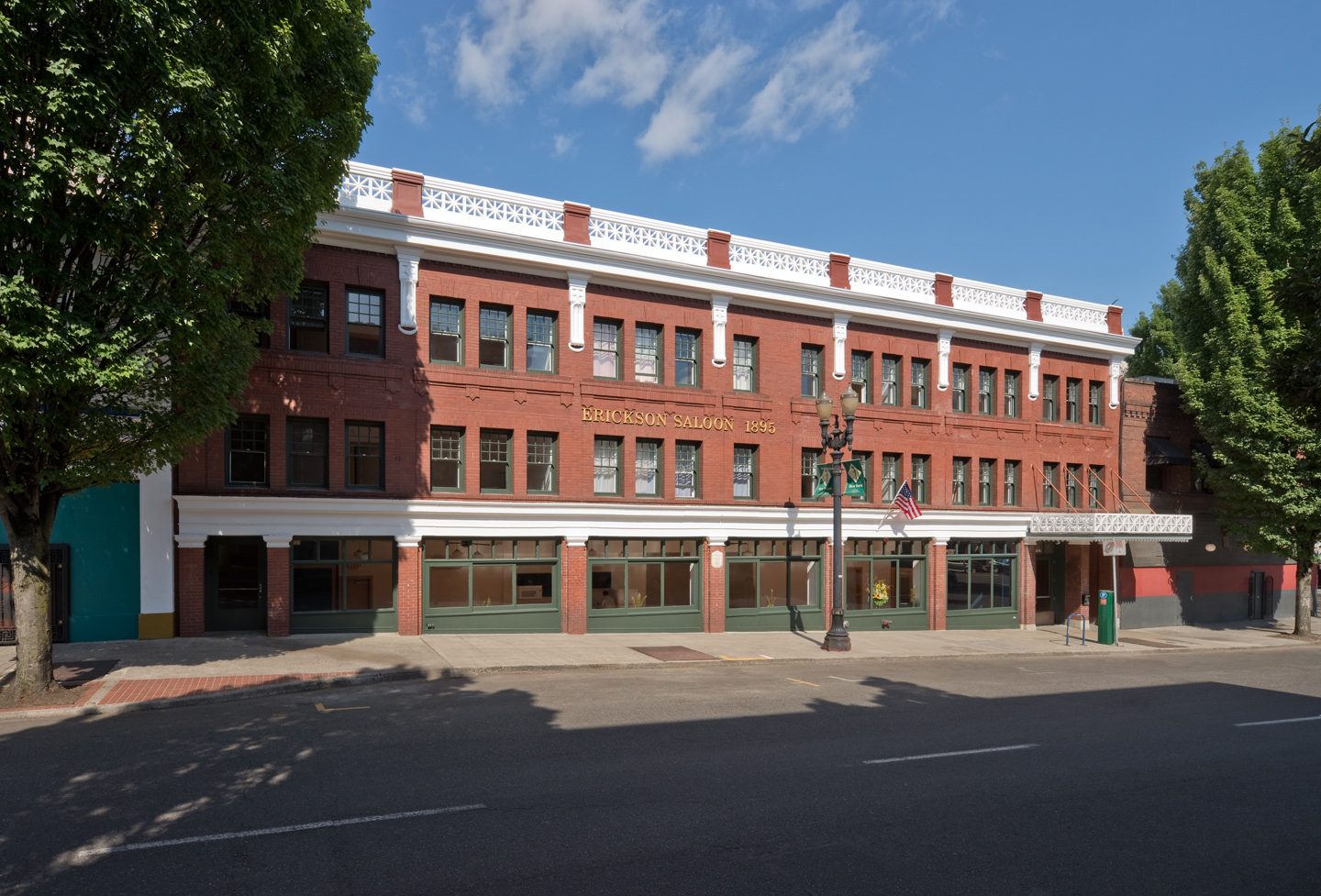 The former Erickson Saloon, along with the Fritz Hotel, has been renovated to provide 52 affordable and 10 market-rate apartments. Credit: Steven Vaughn Photography

Innovative Housing, a developer, owner, and manager of affordable housing with a special niche in preserving and restoring historic buildings, recently unveiled its transformation of Portland, Oregon’s Erickson Saloon and Fritz Hotel into the Erickson Fritz Apartments. Opened in July 2015, the 62-unit, mixed-income development is located in Portland’s oldest neighborhood, Old Town/Chinatown, which has not redeveloped at the same pace as other areas of the city. The careful renovation of the two historic buildings makes a significant contribution to the neighborhood’s revitalization while also providing much needed mixed-income housing and preserving existing affordable rentals.

The Erickson had once been a saloon that boasted one of the longest bars west of the Mississippi, while the Fritz was a “working-man’s hotel,” with a number of small rooms that shared a bathroom down the hall, says Julie Garver, Innovative Housing’s housing development director. The three-story brick buildings, sitting back to back, have been renovated to house 62 studio and one-bedroom apartments. Two apartments are earmarked for people making 30 percent or less of the area median income (AMI), 30 for people making 50 percent or less of AMI, 20 for people making 60 percent or less of AMI, and 10 for market-rate rental. All of the apartments are equipped with ENERGY STAR®-rated lighting and appliances, as well as low-flow toilets, faucets, and showers. The Erickson Fritz Apartments also include bike storage, two community rooms equipped with kitchenettes, and two light-filled atriums that feature art installations commissioned for the renovated buildings. The community rooms have already been used to host an art show opening and a speech by Portland mayor Charlie Hales, as well as for informal resident get-togethers.

Although the Erickson and Fritz buildings were largely vacant and the bar long gone, the renovation turned up a few historical elements such as the cast-iron brackets for the bar’s footrail. The renovation also preserved many period details such as wood floors and exposed brick. In the case of the wood flooring, preservation also saves money and labor in the long run, says Garver. “Floor covering is one of the worst things to deal with in affordable housing. . . . But wood floors are extremely durable; it’s easy to replace one plank instead of a whole floor of carpeting or vinyl.” Costly seismic upgrades — including shear walls throughout the buildings, steel posts along the outer walls, and plywood floor diaphragms for the upper stories — were designed to retain historically significant architectural elements and to preserve the appearance of the buildings’ masonry exteriors. Such attention to detail earned the development a 2015 DeMuro Award for historic preservation from Restore Oregon.

Coming In Under Budget

Development costs for the Erickson Fritz Apartments totaled $15.9 million, funded primarily with federal low-income housing and historic tax credits ($6.5 million), Oregon affordable housing tax credits ($1.7 million), and Portland Housing Bureau tax increment financing ($6 million) as well as a private loan of $825,000. Because Innovative Housing’s office is just a few blocks from the site, the developer could closely manage the renovation and “make decisions quickly” and efficiently, says Garver, allowing them to avoid making poor decisions during construction and the expense of mitigating them. Although the seismic reinforcements for the historic buildings, at approximately $1.5 million, were expensive, the historic tax credit funding brought renovation costs in line with the costs of demolition and new construction. Ultimately, the project cost $100,000 less than had been budgeted. 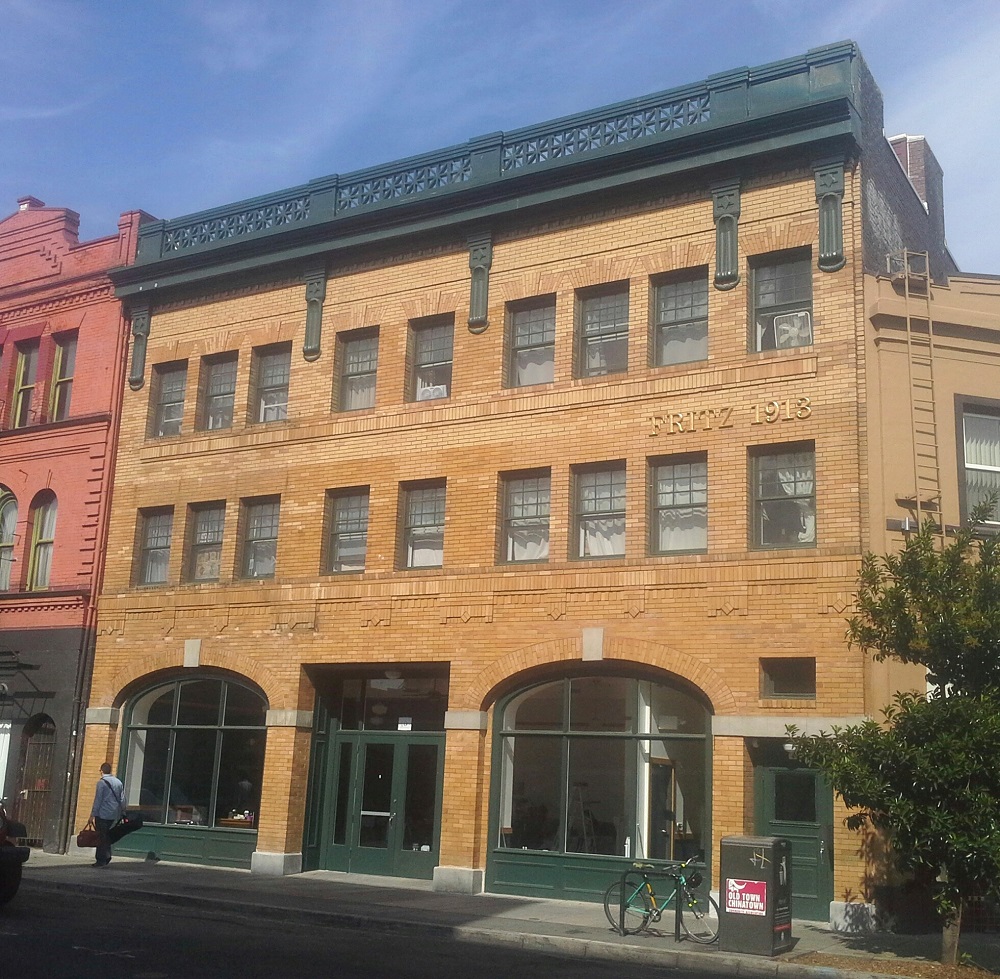 Residents of Portland’s Old Town/Chinatown have supported renovation of the former Fritz Hotel and Erickson Saloon buildings, one of the early cases of reinvestment in the neighborhood. Credit: Innovative Housing

A Good Fit for the Neighborhood

When Innovative Housing began researching the viability of the project, data showed the need for affordable and workforce housing in the area to serve the young, entry-level workers drawn by the commercial and educational opportunities in the nearby downtown and entertainment districts. Many of these workers endure long commutes to their jobs due tothe high cost of housing near their work; they are among 90 percent of the 180,000 people who work within 2 miles of the Erickson Fritz Apartments but live outside of that area. In addition, new market-rate housing is a priority for residents and businesses in Old Town/Chinatown, which had not benefited from the economic revitalization occurring at the edge of the community. The residents and businesses are eager for evidence that market-rate units can be developed in the neighborhood’s derelict and underused buildings and see the need for some additional affordable housing, especially workforce housing. Because the Erickson Fritz Apartments provide both market-rate and affordable rentals, the “neighborhood was incredibly supportive” of the development, says Garver.

More broadly, the apartments add housing in one of the nation’s tightest rental markets. In the last quarter of 2015, the rental vacancy rate in the Portland metropolitan area was 2.4 percent. Average rents in the city increased between 8 and 9 percent over the year ending in the third quarter of 2015, and Javier Mena, assistant housing director at the Portland Housing Bureau, expects rents to rise at least that much in 2016. While rents have been rising, incomes in the region have stagnated; according to the Portland Business Alliance, the region’s median household income actually fell five percent between 2007 and 2014. As a result, housing affordability is a concern for many households. More than one-half of renter households in the city paid more than 30 percent of their income on housing in 2014.

The city’s Old Town/Chinatown Five-Year Action Plan calls for neighborhood revitalization that includes mixed-use housing, and the plan specifically identifies the Erickson and Fritz buildings as a site for reinvestment. Innovative Housing’s new apartments, which were fully leased in 30 days, are consistent with both of these policies. And although Garver admits that the neighborhood is still “gritty,” Old Town/Chinatown continues to evolve. The area is seeing growth in employment opportunities within a half-mile of the Erickson Fritz Apartments, including such firms as Airbnb, the Pacific Northwest College of Art, and the Oregon Storyboard business accelerator. Other parcels are redeveloping to accommodate a range of incomes and maintain the neighborhood’s affordable housing stock.