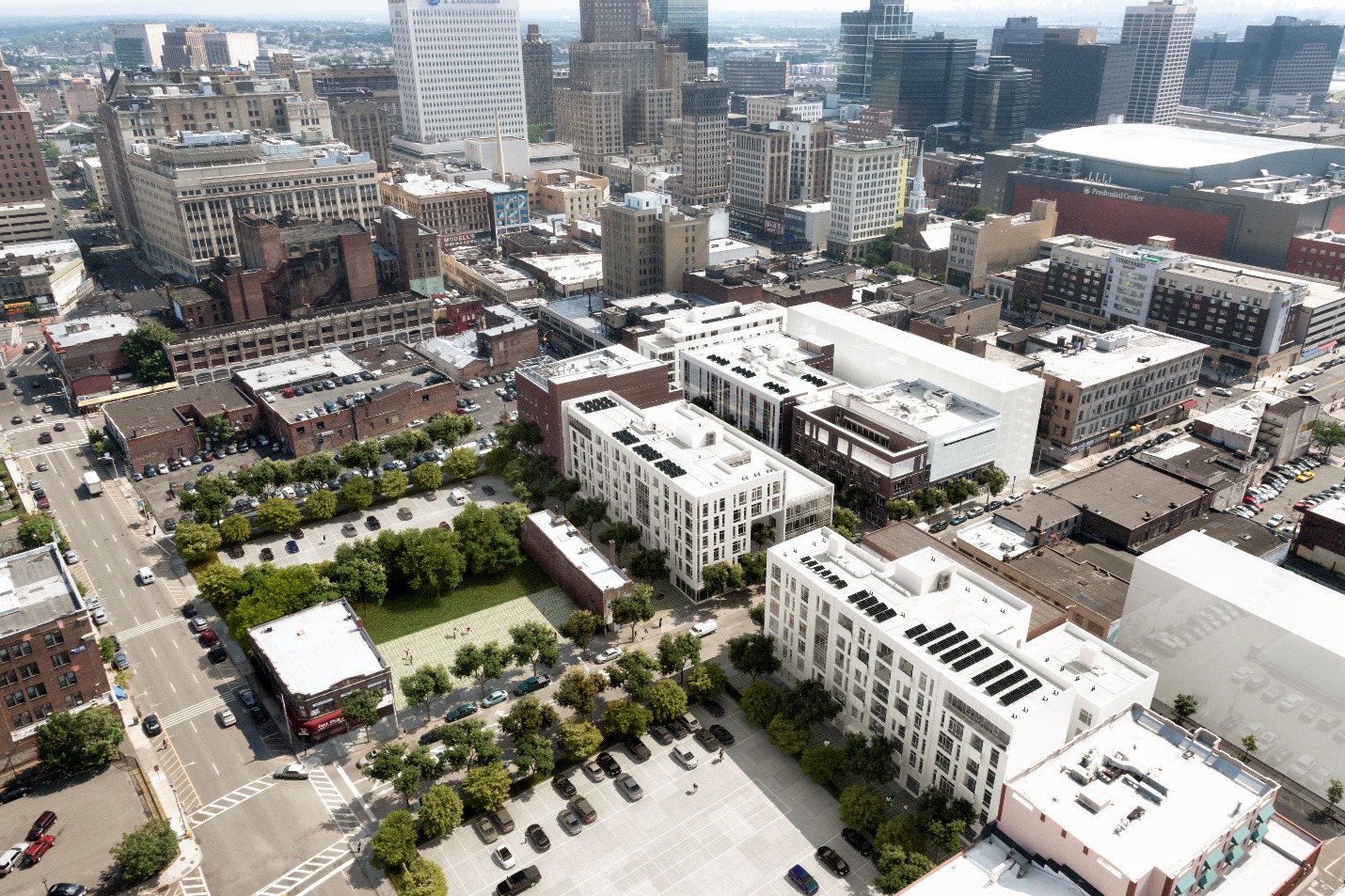 A public-private partnership including developer RBH Group and several state and local entities is replacing a number of vacant lots and deteriorating buildings in downtown Newark, New Jersey, with Teachers Village, a $150 million mixed-use development. Although downtown Newark boasts many amenities, including a train station for PATH and Amtrak trains, campuses for several universities, and cultural offerings such as the New Jersey Performing Arts Center and the New Jersey Symphony, the area has struggled to overcome high vacancy rates and excessive surface parking. As the first phase of RBH Group’s plan for the redevelopment of 12 blocks in the South of Market Street (SOMA) neighborhood, Teachers Village includes retail space, schools, and residential units intended for area teachers. Through Teachers Village, RBH Group hopes to attract and retain teachers, spark educational innovation, and promote economic development.

Supporting a Community of Teachers

According to research conducted by RBH Group, only 19 percent of teachers who work in Newark also live in the city; however, many teachers are interested in living closer to their schools and to Newark’s amenities. To provide housing for these teachers, Teachers Village, when completed, will feature 2 educational buildings and 4 residential buildings with 41 affordable and 163 market-rate units (table 1). All 6 buildings will contain ground-floor retail providing a total of 64,000 square feet for more than 20 businesses.


As of January 2016, five of the buildings have been constructed, including three of the residential buildings and the two school buildings, which house an early learning facility and three charter schools serving K–12 students. The completed residential buildings include 123 units, 24 of which are studios affordable to households earning roughly 60 percent of the area median income. The remainder of the completed units are market-rate rentals, although the rent is affordable to households with incomes roughly equal to the area median, which, according to Ron Beit, founding partner and chief executive officer of RBH Group, is consistent with most teachers’ salaries. Teachers are given preference for all of the residential units, and educators receive a 15 percent discount on the rent for market-rate units.

To encourage educational innovation, RBH Group is installing smartboards and computers in the common rooms of each of the residential buildings, creating “smart classrooms” that teachers can use for meetings with students and parents or to further their own education. Beit notes that RBH Group is currently seeking to expand afterschool educational opportunities in the development by “exploring a larger and cooler space” within Teachers Village, which would help community members advance their degrees and study in other fields. RBH Group hopes that by bringing together educators and other community members, the continuing education component of the development will foster advances in education.

Beit stresses that Teachers Village would not have been possible without the public and private support that the development received. Financing for the $150 million development included more than $100 million in new markets tax credits. The New Jersey Economic Development Authority (NJEDA) awarded Teachers Village funding through its Urban Transit Hub Tax Credit and Qualified School Construction Bond programs. The development also received a loan from the state’s Casino Reinvestment Development Authority, a community development block grant from the city, and a loan from the Urban Enterprise Zone Loan Fund managed by Newark’s economic development agency. In addition, NJEDA and the city jointly provided redevelopment area bond financing for the project.

Teachers Village is helping to revive the SOMA neighborhood and the rest of downtown Newark by providing housing within walking distance of restaurants, stores, entertainment venues, and other amenities. All of the residential buildings in Teachers Village have a Walk Score® of 98, indicating that residents do not need a car to complete most daily tasks. Teachers Village is also designed to achieve Leadership in Energy and Environmental Design (LEED) for Neighborhood Development certification, denoting that both the development as a whole and each of its component buildings has met defined energy-efficiency thresholds. In addition, the 230/240 Halsey Street building has been designed to meet or exceed LEED for Schools Silver certification standards.

As the last building in Teachers Village nears completion — which is expected by late summer or early fall 2016 — signs of the development’s success are already appearing. As of January 2016, all of the completed residential units have been leased. Also, efforts to attract teachers to the development appear to have been successful; approximately 70 percent of the residents are teachers. Many of the residential units under construction have also been preleased. In addition, all of the schools within the development are at capacity, and RBH Group has leased 70 percent of the total retail space, even though construction is not yet complete. Businesses such as Provident Bank and Closet Savvy, a consignment store, have already moved into their storefronts. Beit notes that RBH Group is seeking unique tenants to provide a destination for consumers and to avoid replicating stores that can be found elsewhere in the area.

Some signs of success for the city of Newark are also evident. The employment impact of the development has yet to be fully assessed because construction is ongoing and some of the retail spaces are not yet occupied, but Beit expects that the development will meet or exceed its goal of creating hundreds of construction and permanent jobs. In addition, Newark residents have filled more than 30 percent of the construction jobs created thus far. Downtown Newark is also experiencing reinvestment; according to Beit, since the groundbreaking of Teachers Village, downtown Newark has seen $1 billion in additional development, including the construction of two hotels.

RBH Group is now in the design and predevelopment phase for the next project in the SOMA neighborhood, the Four Corners Millennium. According to Beit, this $350 million mixed-use redevelopment project will extend the zone of redevelopment from Teachers Village directly into the Market and Broad Street corridor. Four Corners Millennium will provide 705 apartments, 160,000 square feet of retail space, and 70,000 square feet of hotel space, including 130 hotel rooms.