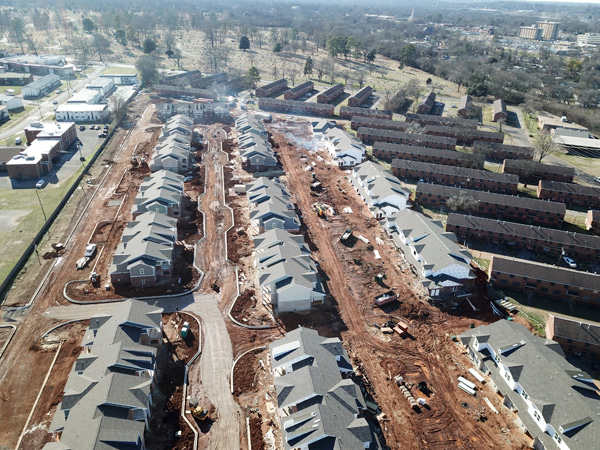 The Villas at Titusville, the first onsite phase of the redevelopment of Loveman Village following an earlier offsite phase, consists of 100 units and came online in late 2019. The second phase, consisting of 64 units, will be completed in 2020 and will involve demolition of the remaining barracks-style buildings from Loveman Village. Credit: Hollyhand Development

For more than 60 years, the Titusville neighborhood in Birmingham, Alabama, had been home to Loveman Village, a 500-unit public housing project that, over time, had accumulated a raft of social and infrastructure problems. Loveman Village was in such poor condition that large portions of the complex were either vacant or sparely populated. Conditions in North Titusville, where Loveman Village was located, reflect a history of underinvestment, with considerable blight and pockets of crime. By the end of Loveman Village’s operational life, only 246 residents called the project home. The old housing is being replaced in three phases; the second phase, known as the Villas at Titusville, was completed in late 2019. The new structures are already providing residents of the former public housing with safe, modern apartments. They are creating new opportunities for achieving self-sufficiency and are transforming the relationship between affordable housing and the surrounding neighborhood.

Recognizing that the crime and blight at Loveman Village were negatively affecting residents, neighbors, and property values in the community, the Housing Authority of Birmingham District began exploring options to replace the project. In 2014, the city recruited Hollyhand Development, a firm experienced with developing affordable housing, to implement its vision for Loveman Village’s redevelopment. The scope of the work required Hollyhand Development to split the redevelopment into three phases. The first phase, which was completed at a site near Loveman Village, was funded through the Rental Assistance Demonstration program, which helps fund the conversion and renovation of old public housing projects. The project, known as the Park at Sydney Drive, supplied 120 units for residents of Loveman Village to relocate while onsite work began on the subsequent two phases. The 100-unit Villas at Titusville, which was funded primarily through 9 percent low-income housing tax credits, was completed in late 2019 and was almost fully leased as of spring 2020. Groundbreaking for the final phase, consisting of 64 units, took place in late 2019. These new units will consist of a mix of one-, two-, and three-bedroom configurations. 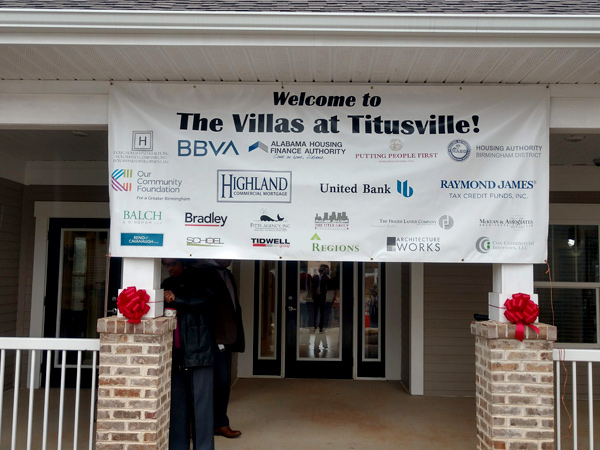 According to Winton Yerby, president of Hollyhand Development, the Villas at Titusville reflects a better approach to affordable housing design than had been pursued with Loveman Village. Yerby says that the “barracks-style” design of Loveman Village, along with the fence that once surrounded the site, physically and symbolically separated the project and its residents from the greater community. The project architects of Villas at Titusville removed the fence and drew inspiration from the surrounding area’s architecture to more seamlessly integrate the new buildings into the neighborhood. The density of Loveman Village, Yerby says, was disproportionately higher than that of the surrounding neighborhood and further contributed to problems at the site. Lowering the density of the Villas at Titusville also allowed units to be more spacious than the ones they replaced. Finally, the addition of porches to the new units further encourage social interaction and enhance safety through an “eyes on the street” approach.

Onsite amenities help deliver educational, social, and wellness benefits to residents. One of the community facilities contains a community room and fitness center, and the other is envisioned as a facility where residents can receive educational and job training services and host community meetings. Multiple playgrounds on the property, along with a covered basketball court that the Housing Authority of Birmingham District retained from Loveman Village, help keep children active. 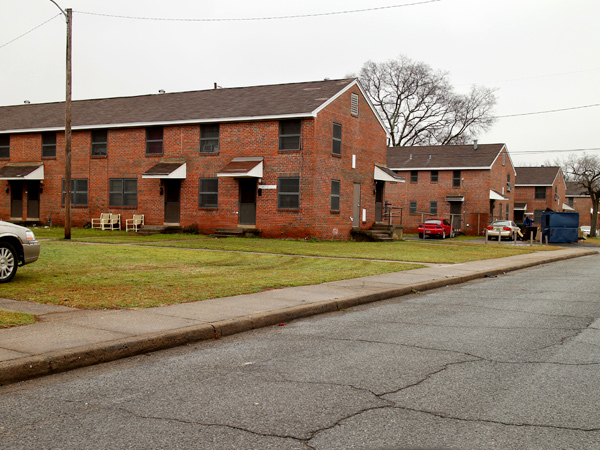 The old barracks-style housing of Loveman Village had grown to be physically inadequate and encouraged criminal activity. Credit: Hollyhand Development

Residents are eligible to participate in the Family Self-Sufficiency (FSS) program, a federally funded program administered by local public housing agencies that helps families and individuals living in public housing or benefiting from federal rental assistance. Participants in the program receive targeted, individualized support through an FSS coordinator who works with households to identify specific activities and services that families need to achieve their educational, personal, and professional goals. The objective of the FSS program is to graduate participants into living with a reduced need for subsidy within five years of enrolling. In addition, one of the project’s partners, the bank BBVA USA, provides personal finance and homeownership workshops to residents. Project-based vouchers at all three of the redevelopment phases further help families achieve housing stability and financial security.

According to Yerby, the reception from area residents has been overwhelmingly positive. Loveman Village was notorious for its problems, and the care taken in the design of the Villas at Titusville improves public safety and reduces the social stigma that can sometimes accompany affordable housing. With the completion of the third and final phase, Hollyhand Development, the Housing Authority of Birmingham District, and the nearly 20 other organizations involved in the project, will have delivered an important asset that will enhance the lives of disadvantaged Birmingham residents.