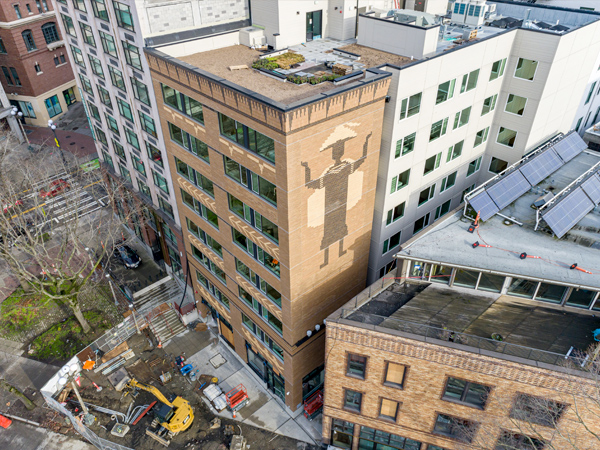 In King County, Washington, which includes the city of Seattle, Native Americans account for only 1 percent of the population but 15 percent of the total population of those experiencing homelessness and 32 percent of the total population of those experiencing chronic homelessness. This disparity is not uncommon for Native Americans living in urban settings in the United States. In addition, mainstream social services in Seattle and other U.S. cities do not adequately meet the specific cultural needs of Native individuals. Since 1970, Chief Seattle Club, a nonprofit organization serving the mental, physical, emotional, and spiritual needs of the local Native population, has attempted to address homelessness in its community with a culturally appropriate, holistic approach. The organization pursues its mission through programs that provide temporary housing, trauma-informed case management, community-building activities, and employment services. ʔálʔal (pronounced “all-all”), which means “home” in Lushootseed, is Chief Seattle Club’s first permanent affordable housing development and provides 80 units of housing primarily for people experiencing homelessness. The mixed-use project, which is located next to the organization’s headquarters in Seattle’s Pioneer Square neighborhood, also includes spaces for a comprehensive health clinic, café and art gallery, and a community room where residents receive supportive services that sustain their housing stability. ʔálʔal’s architectural style and building features uniquely reflect Native American culture, art, and community priorities. Opened in early 2022, the project is one of several housing developments that Chief Seattle Club has planned for the coming years.

ʔálʔal is a 9-story building that consists of 80 studio units. Ten units are reserved for veterans, and the remaining units, which are intended for people experiencing homelessness, are affordable to households earning up to 30 and 50 percent of the area median income. The development also has set aside 15 units for referrals from the county’s coordinated entry system. Chief Seattle Club, which also operates shelters, targeted eligible Native Americans it was serving through its other programs by having them fill out an interest form before the development opened. The organization expects full occupancy of ʔálʔal by the end of March 2022. 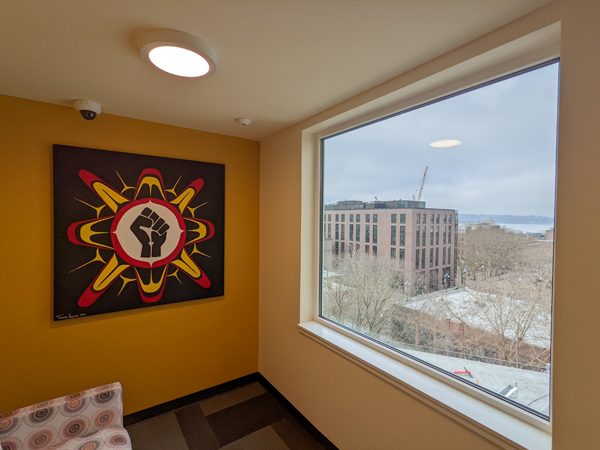 The ʔálʔal building was designed to avoid an institutionalized feeling of a long hallway with rooms on each side. Residents are able to socialize at the end of each hallway with a view of the water in the distance. Photo credit: Chief Seattle Club

The residential portion of ʔálʔal is on the top seven floors of the building and is accessible through one of three entrances at the ground level. According to Derrick Belgarde, executive director of the Chief Seattle Club, the residential floorplan was purposefully designed to avoid the institutional appearance of one long corridor with units on each side. Native American architect Johnpaul Jones recognized the trauma such environments cause in Native American populations and designed each floor with short, choppy hallways with space at the ends for residents to socialize and enjoy the view of Puget Sound. More than 60 Native artworks hang throughout the residential building, reinforcing Chief Seattle Club’s hope that “no matter where you are standing, whether inside or outside, you can look and know that it is a Native building,” according to Belgarde.

Native design elements also adorn the building’s exterior. The south-facing wall features a brick design of a 40-foot matriarch of the Coast Salish people. Other brick designs on the front side of the building reflect aspects of Native life, including natural elements, like rain; human life, like canoes; and animals, like geese. Chief Seattle Club plans to place a 25-foot statue of a Native mother figure, which was designed by a Native artist, at the building’s entrance after the organization reconstructs the front sidewalk.

The project’s community spaces also contribute to Chief Seattle Club’s goal of providing sacred spaces to help Native peoples heal in the context of a supportive community. A community room on the third floor is available to residents for social events such as movie nights as well as culturally relevant programs such as a drum-making class or talking circle. From the community room, residents can walk to a small outdoor plaza that connects ʔálʔal and the Chief Seattle Club building. The building’s ground floor features a café that will open later in 2022. Belgarde expects the café to serve breakfast and lunch and offer Native foods; it will double as a gallery space where participants in Native Works, Chief Seattle Club’s workforce development program, can sell their products. Another community amenity available to ʔálʔal residents, members of the Chief Seattle Club, and the general public is a health clinic operated by the Seattle Indian Health Board. The clinic, which is expected to open later in 2022, has a separate street-level entrance, consists of exam rooms and a pharmacy, and will address the mental and physical health needs of the communitry. 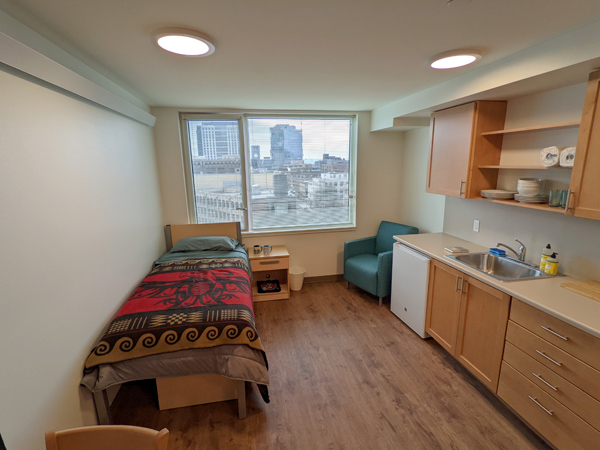 ʔálʔal extends the resources of Chief Seattle Club, which is located next door, by providing opportunities for onsite supportive services that help stabilize formerly homeless residents in the organization’s housing. According to Belgarde, two housing case managers from Chief Seattle Club offer residents onsite, trauma-informed case management to ensure that they maintain their health and wellness. A program manager maintains a calendar of regular activities that honor Native customs, traditions, and history. An example of this culturally specific approach is Wellbriety, a Native-informed approach to recovery from addiction to substances. ʔálʔal residents can participate in these activities both in the building’s community space and in programs taking place at Chief Seattle Club’s headquarters next door. Residents will also be able to access the health services provided in the Seattle Indian Health Board clinic on the ground floor. In addition to the program manager and case managers that Chief Seattle Club provides, ʔálʔal has a full-time staff member responsible for maintaining the building’s safety and security.

Permanently affordable housing that addresses the holistic needs of Native people experiencing homelessness has become a focus of the Chief Seattle Club in recent years. Only in the past decade or so, says Belgarde, has the organization expanded its focus to include providing wraparound services that stabilize the mental, physical, and spiritual needs of its community. The $50 million project, the first of its kind for Chief Seattle Club, relied on city, county, state, and federal funds as well as approximately $20 million in private donations the organization collected through a major capital campaign. The lessons Chief Seattle Club learned from its first development are informing several new affordable housing projects in the pipeline, including units tailored to families, and the organization plans to share this knowledge with other nonprofit minority developers.