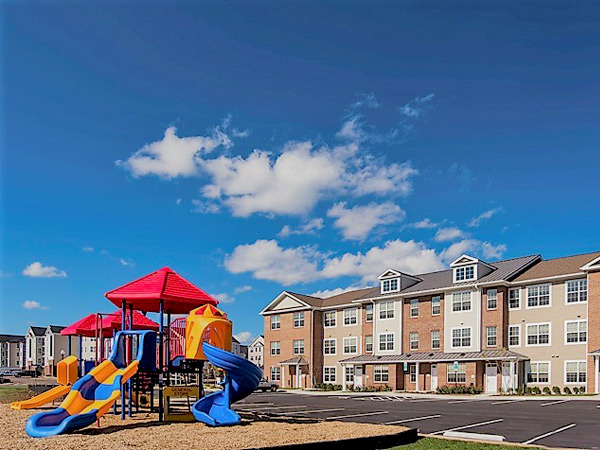 Loudoun County, Virginia, on the western edge of the Washington, DC metropolitan area, is one of the most expensive places to live in the United States. In 2015, the median home value in Loudoun County was $452,300, and the median gross rent was $1,668. As the county’s economy grows, low- and moderate-income workers are hard pressed to find affordable housing in the county. A housing needs assessment for Loudoun County estimated that, in 2014, 78 percent of households earning less than 60 percent of the area median income (AMI) were cost burdened, paying 30 percent or more of their income on housing. The assessment also predicted that supplying enough workforce housing to meet demand will be a challenge through 2040. The 98 units at Shreveport Ridge help meet the need for affordable workforce housing in the high-opportunity county, and the development has paved the way for changes to local regulations that enable additional affordable housing opportunities.

Shreveport opened in 2014 within the Brambleton master planned community near Dulles International Airport; when fully completed in 2030, Brambleton will consist of more than 9,000 housing units, a mixed-use town center, a county library, nearly 3,000 acres of green space, and 5 public schools. Shreveport’s apartments, which have one to four bedrooms, are available to households earning between 40 and 50 percent of AMI. Codeveloped by the nonprofit Windy Hill Foundation and TM Associates, the project’s design resembles the surrounding building stock. Shreveport is arranged in four 3-story buildings with 2-floor townhouses above 1-story flats on the ground level. Ten of the ground floor units meet HUD Section 504 standards for accessibility, including features such as appliances with front controls, roll-in showers, bathrooms with grab bars, and cabinets set to heights accessible for persons with disabilities; HUD project-based vouchers are assigned to each accessible unit. The other 24 ground-floor units follow universal design standards as required by the Virginia Housing Development Authority (VDHA). A playground, community room, and computer lab provide areas for afterschool programming and other resident services that Windy Hill Foundation plans to provide in coordination with area schools, says Kim Hart, former executive director of Windy Hill Foundation.

The buildings achieve energy cost savings for residents through one of the largest geothermal systems in Virginia, which provides all heating and cooling through an underground water loop. Combined with other energy-efficient features such as water heaters and windows, the geothermal system has significantly reduced utility costs, according to Adam Stockmaster, executive vice president of operations for TM Associates. Residents also benefit from reduced transportation costs because of Shreveport’s proximity to jobs and transit. A nearby bus stop and a trail that leads to a bus transfer facility less than a half-mile from the property connects residents to the regional bus network. The anticipated extension of Metrorail’s Silver Line will further expand Shreveport residents’ transportation options. Residents, 60 percent of whom are between 19 and 35 years of age, are employees at Dulles International Airport, medical assistants, retail workers, and daycare and school teachers. According to Hart, Shreveport’s high percentage of millennial residents with jobs in nearby service-sector industries supports the county’s economic development.

Windy Hill Foundation and TM Associates began developing Shreveport Ridge in 2011. A rezoning condition dating from the late 1980s required all units on the Shreveport site to be affordable for households earning up to 60 percent of AMI for 20 years. To enhance the project’s application for low-income housing tax credits, the developers sought deeper levels of affordability for a longer period (30 years) to align with VHDA’s financing requirements. The developers also improved their application by achieving green building status from Viridiant (formerly EarthCraft Virginia). The $22 million project was funded with $15 million in equity through low-income housing tax credits, a $7 million mortgage from Capital One, and $100,000 contributed by the developers. 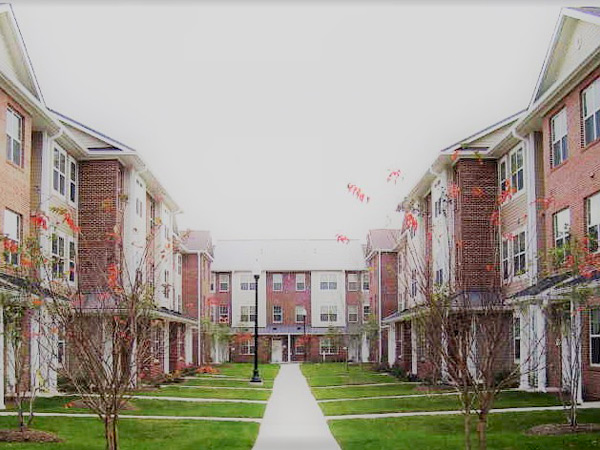 The design of Shreveport Ridge includes two-story townhouses above one-story flats on the first floor, which are accessible to persons with disabilities. Credit: Harkins Builders

Low-income housing tax credits would not have been a financing option for Shreveport Ridge if it had to comply with Loudoun County’s then-current Affordable Dwelling Unit (ADU) program, which required at least 6.25 percent of the units in large developments to be affordable. Shreveport Ridge was exempt from the ADU program because the development was built in compliance with the Brambleton rezoning. At the time the Shreveport Ridge development was approved, the county’s program prohibited residential developers from using state or federal funds for the affordable units. This included low-income housing tax credits, the largest source of financing for affordable housing in the country, and made constructing the required ADUs difficult. As a result, developers preferred an option in the county’s program that allowed a cash payment to the county in lieu of constructing the units. In part because of the ADU program’s funding limitation and the fee-in-lieu alternative, Loudoun had a shortage of 8,309 rental units affordable for households earning up to 60 percent of AMI in 2014.

Based on its experience with Shreveport Ridge and input from its developers, Loudoun County revised its ADU program in October 2016 to allow state and federal financing sources, as well as to discontinue a requirement that affordable units be dispersed throughout a development. TM Associates and Windy Hill Foundation supported the change by pointing to the affordable housing they were able to develop at Shreveport Ridge and other projects in Virginia using low-income housing tax credits. The county expects that the revised ADU program will encourage similar projects and bring the supply of affordable housing closer to what is needed. Under the new ADU guidelines, TM Associates anticipates opening an 83-unit active adult community in late 2017 using low-income housing tax credits. Hart is confident the changes will produce many affordable housing units in Loudoun County.