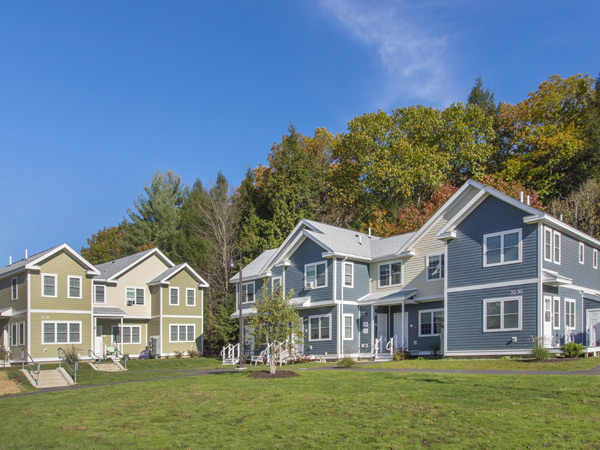 After nearly a half-century of providing affordable housing for low-income families and individuals in Greenfield, Massachusetts, the Leyden Woods Apartments development was, by 2015, showing its age. Mounting structural and environmental issues convinced the property’s owners, nonprofit developer The Community Builders (TCB), that replacement of the entire development, rather than refurbishment, was the appropriate course of action. Early plans, which envisioned entirely new structures to be built on another corner of the 44-acre site, faced challenges from neighbors as well as environmental regulations and fiscal viability issues that forced TCB to change its strategy. By choosing modular construction and building on the existing building footprint, TCB’s solution minimized disruption to residents while limiting construction costs and project duration.

The original Leyden Woods Apartments, built in 1973, was one of the last affordable housing projects funded through HUD’s Section 236 program, and had been itself produced using modular construction. Constructed before 1976, when the National Manufactured Housing Construction and Safety Standards Act established building code standards for manufactured housing, the development eventually became plagued by structural and water issues, and the buildings’ physical deterioration contributed to growing social problems, including a criminal element that saw Leyden Woods as a zone in which to freely operate. By 1996, when TCB acquired the property, Leyden Woods had developed a reputation locally as a “housing option of last resort,” according to the National Affordable Housing Management Association (NAHMA). After assuming responsibility for Leyden Woods, TCB quickly invested in structural improvements and began engaging residents to strengthen social ties under the theory that strong communities make safe communities. Change came gradually, and by 2011, these efforts had paid off, with TCB receiving NAHMA’s award for Best Turnaround of a Troubled Property.

Despite these efforts, the underlying inadequacy of the existing structures remained an issue. Just prior to deciding, in 2015, to use modular construction on the existing footprints, TCB had first envisioned replacing the buildings with entirely new structures to be built nearby on a corner of the property. This strategy had the advantage of requiring only a single move for all existing residents, directly from their old unit to a brand new one. This proposal, however, generated opposition from nearby property owners who objected to being closer to the complex. Regulations protecting wetlands, which did not exist during the original construction, limited alternative siting on the Leyden Woods parcel. Financial and logistical constraints made the replacement plan untenable.

From these constraints, modular construction emerged as a workable solution to the challenges of building a new Leyden Woods. First, modular construction could make use of the existing building footprint, resolving property owners’ qualms about proximity. Using the existing footprint would also avoid encroaching further on protected wetland areas, and some of the old buildings were not replaced thus restoring wetland areas. Second, modular construction would help keep costs down, making the project financially feasible. Finally, modular construction could minimize the disruptive burden on families of being temporarily relocated during construction by taking less time to complete compared to traditional methods. In the end, only one cohort of residents needed to make two moves — first into temporary housing for slightly less than a year, and then into their new, permanent homes. Most residents moved directly into their new units as new buildings were completed over a series of eight construction phases. TCB’s proactive engagement strategy made residents involved partners in coping with the inevitable disruptions of such a large construction project.

A total of 49 new structures were completed over eight phases of construction. The total number of units, at 200, remains unchanged. Project-based housing choice vouchers provide rental assistance for 181 units, and the remaining units are reserved for families earning no more than 60 percent of the area median income. Targeted at individuals and families, the development consists of 66 one-bedroom, 66 two-bedroom, and 68 three-bedroom units. One downside of reusing the existing building footprint is that the site plan could not be altered; the courtyard-centered plan at Leyden Woods no longer reflects urbanists’ and architects’ current thinking about spatial organization or TCB’s preferred practices, according to Rachana Crowley, senior project manager at TCB. Programming and smaller-scale site interventions help overcome that shortcoming and promote social well-being. Onsite amenities include a basketball court, playgrounds, a business center that also hosts afterschool programs, a community garden, and a communal resident lounge and kitchen. In addition, a new 2-mile pedestrian path winds through the property, providing residents with a convenient venue for exercise and recreation. Finally, each of the new buildings is ENERGY STAR® certified, and the new buildings are more accessible than the original 1973 structures. 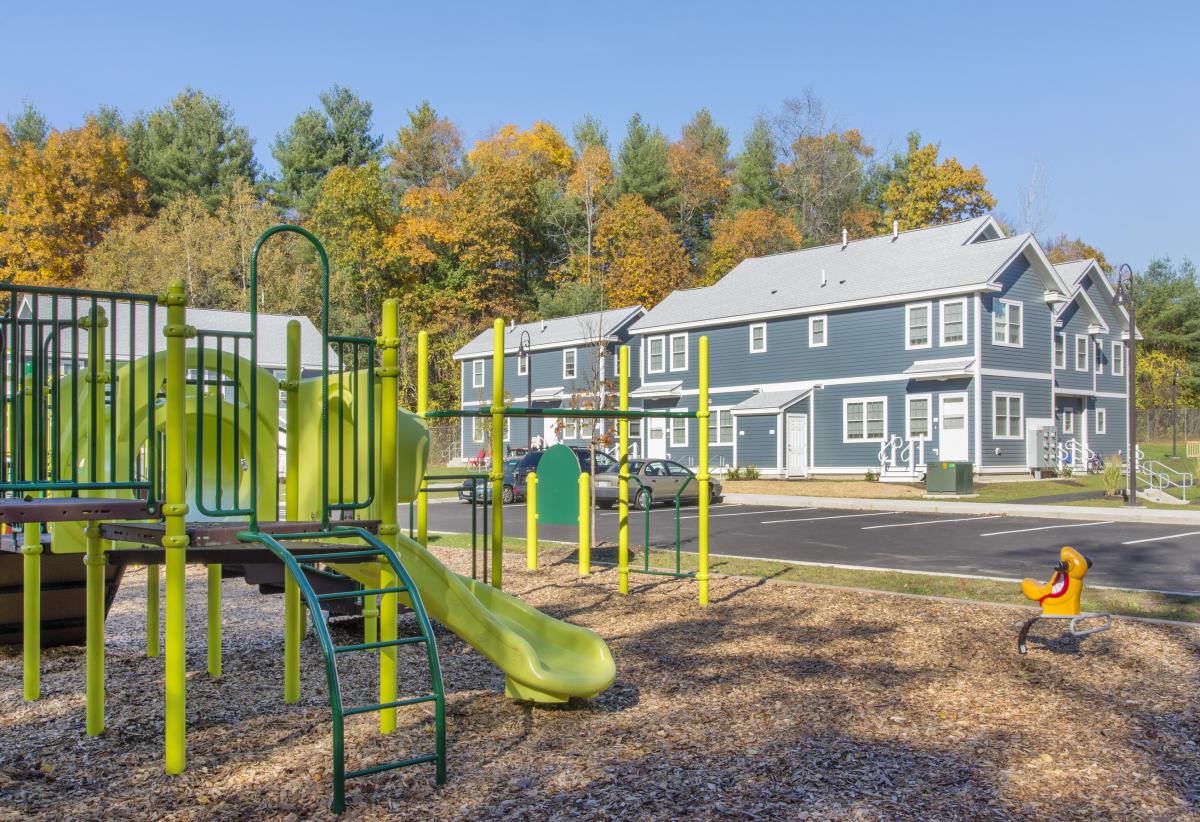 Development costs for the new Leyden Woods totaled $79 million. Most of the project’s financing came through MassHousing, a quasi-public state agency that finances affordable housing in Massachusetts, including a $26.2 million construction and permanent loan, a $24.7 million bridge loan, and a $2.1 million second mortgage. Leyden Woods was also awarded 4 percent low-income housing tax credits, which were purchased by investment partner Aegon. Additional funding sources included a Mass Save grant to support the environmental features of Leyden Woods; a City of Greenfield infrastructure grant; and state grants from the Massachusetts Affordable Housing Trust Fund, the Massachusetts Housing Innovations Fund, and the Massachusetts Housing Stabilization Fund.

The knowledge gained from this experience with modular construction is influencing other TCB affordable housing projects. The company plans to use the technique at a public housing project in nearby Holyoke, Massachusetts, as well as in a project in Yonkers, just outside New York City.