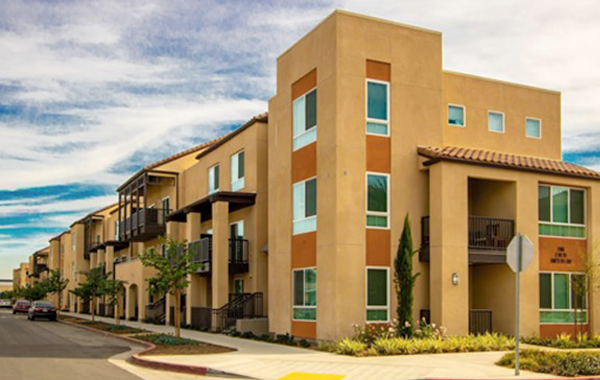 In June 2020, the Housing Authority of the City of Los Angeles (HACLA) completed the first phase of a multibillion-dollar redevelopment of Jordan Downs, one of the city’s largest housing projects. This first phase, constructed in partnership with BRIDGE Housing, is a 115-unit residential complex known as Cedar Grove. More than half of the apartments are reserved for Jordan Downs residents, and the remainder are available to tenants earning less than 60 percent of the area median income (AMI). When all phases are completed, the redevelopment will offer more than twice as many apartments as Jordan Downs, including a one-to-one replacement of the original public housing units, additional affordable units, and some market-rate units. The new development will also feature new commercial outlets and community spaces. Cedar Grove, along with the entire redevelopment project, will also help revitalize the surrounding Watts neighborhood, a low-income community south of downtown Los Angeles whose residents are almost exclusively people of color.

Originally built for steelworkers during World War II, Jordan Downs was converted into public housing in 1955. Although the projects were partially integrated when they opened, they, like the rest of the Watts neighborhood, were populated almost exclusively by African Americans by the mid-1960s. As industrial jobs left Watts, the median income of the neighborhood’s public housing residents decreased even further. Today, a low-income population of African-American and Latino residents lives in Jordan Downs, which recently has fallen into disrepair. In 2008, HACLA decided to rebuild this public housing site and transform the structures and several neighboring properties into a mixed-income and mixed-use community.

Following a “build first” strategy, HACLA planned to construct replacement apartments for all 700 households living in Jordan Downs before their individual units were demolished to ensure that the development did not displace any residents. A neighboring site, home to an abandoned steel manufacturing facility, was well suited for a portion of these housing units as well as commercial space. However, according to Jenny Scanlin, HACLA’s chief strategic development officer, several factors complicated HACLA’s effort to acquire and develop the 21-acre site. The parcel was just outside of the city limits in unincorporated Los Angeles County, outside of HACLA’s jurisdiction. Before construction could begin, the city of Los Angeles had to annex this piece of land, a process the city had not undertaken since the 1980s. In addition, HACLA spent a year remediating the contaminated site. HACLA also had to construct a new half-mile street because the site lacked vehicular access. 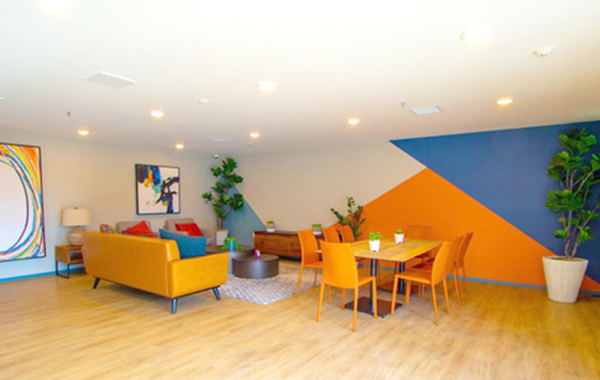 Phase 1a of the Jordan Downs redevelopment is an affordable housing complex known as Cedar Grove. The apartments opened in June 2020 as the first of two affordable housing projects on the former industrial site. This 115-unit development consists of 12 buildings. Virtually all of the one- to five-bedroom apartments are reserved for residents earning less than 60 percent of AMI. Seventy-two units are reserved for current Jordan Downs residents, and another 10 are set aside for referrals from HACLA. The remaining 32 units are tax-credit only and filled through a waitlist and lottery process. Twenty-five of the units are designed for residents who have limited mobility, and 10 are targeted to those with hearing or visual impairments. Each of Cedar Grove’s apartments has its own washer and dryer. The property includes a community room and a park with grills. Thanks to its energy-efficient design, the property has Leadership in Energy and Environmental Design (LEED) Gold certification from the U.S Green Building Council. Cedar Grove is located near a shopping center anchored by a full-service grocery store, and more amenities will follow as Jordan Downs’ redevelopment continues. A light rail station, new bike lanes, and an electric vehicle car share program provide multimodal access to downtown Los Angeles, Long Beach, and points in between.

Cedar Grove cost nearly $58 million, approximately half of which came in the form of low-income housing tax credit equity. Nearly $17 million came from various grants and loans from HACLA. Meanwhile, the California Department of Housing and Community Development provided $6 million through its Affordable Housing and Sustainable Communities Program, which supports developments that reduce greenhouse gas emissions. The developer also provided gap funding. Some of the apartments replacing the public housing units were supported through HUD’s Rental Assistance Demonstration program, which allows public housing agencies to support public housing units with other public programs or private sources. 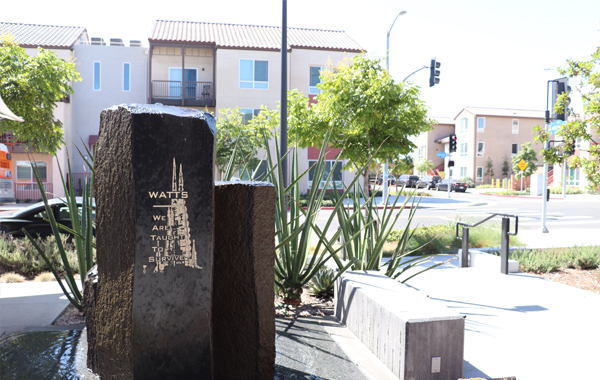 Upon completion, the entire multibillion-dollar development will have nearly 1,600 new affordable and market-rate apartments, some of which will be owner occupied. The complex will include more than 150,000 square feet of commercial space. The plan also calls for a large community center and several public parks. In 2018, HUD awarded HACLA a $30 million Choice Neighborhoods implementation grant for the housing development and surrounding amenities. In addition to replacing aging public housing apartments and providing several new affordable units, Cedar Grove and the entire redevelopment can help revitalize this neighborhood that still lacks significant private investment. The new commercial outlets and community park space can be enjoyed by existing and future residents of the community. The Jordan Downs redevelopment will also support local economic development efforts. All the retail tenants occupying more than 10,000 square feet in the new development are required to prioritize onsite public housing and low-income residents for 30 percent of their job openings. In addition, two national chains have community stores onsite that offer job training for residents and other community services.

Correspondence with Trixie Aquino, executive assistant to chief strategic development officer, Housing Authority of the City of Los Angeles, 11 May 2022.×