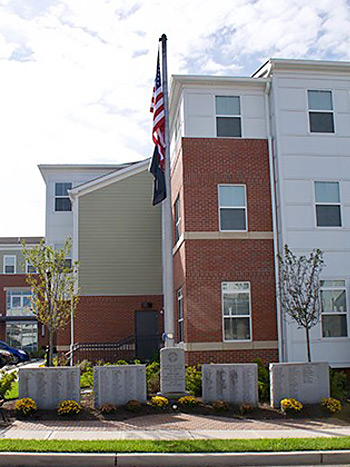 Built on the site of the local Veterans of Foreign Wars (VFW) post, Dalina Manor pays tribute to that legacy by honoring the names of local service members who died during combat. Space is also provided in the building for members of the VFW to continue to meet. Credit: BCM Affordable Housing

Located in the Hopelawn neighborhood in northern New Jersey’s Woodbridge Township, Dalina Manor is one of a number of recently developed affordable housing projects designed for local seniors. In addition to offering longtime residents an affordable place to live as they age, Dalina Manor pays tribute to Woodbridge residents who have served in the armed forces. The local post of the Veterans of Foreign Wars (VFW) had previously occupied the site of the newly constructed apartments. To honor the veterans’ service, Dalina Manor includes a dedicated meeting space for VFW members, incorporates some elements from the old VFW building, and preserves a memorial to Woodbridge’s fallen heroes on the property. By serving Woodbridge’s senior and veteran populations, Dalina Manor is an asset to the greater Woodbridge community and a tribute to the town’s legacy.

Built by developers Ingerman and BCM Affordable Housing, Dalina Manor consists of 57 units housed in a 3-story building and includes 49 one-bedroom and 8 two-bedroom apartments. Construction began in spring 2016 and wrapped up in September 2017, with the first residents moving in shortly thereafter. Within a matter of months, Dalina Manor was fully leased up. Amenities include one parking space per unit, storage facilities for residents, an onsite gym, and a community room with a kitchen, which hosts programming for residents and fosters social connections. In addition, the building contains an office intended for a local social service provider. To qualify for one of the apartments at Dalina Manor, residents must be aged 55 or older and earn no more than 60 percent of the area median income. The project does not include rental subsidies. 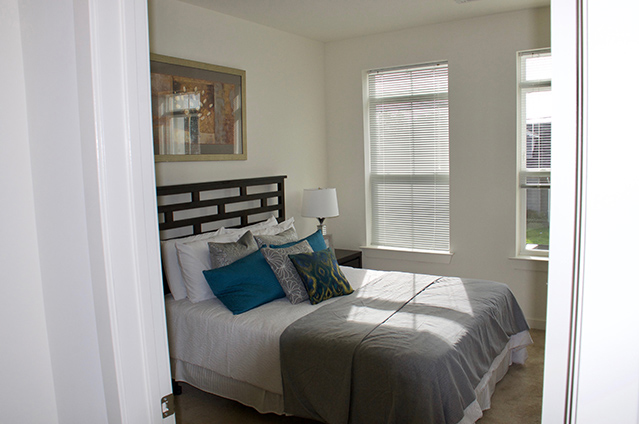 The 57 one- and two-bedroom units at Dalina Manor provide an affordable housing option to seniors in and around Woodbridge, New Jersey. Credit: BCM Affordable Housing

Dalina Manor is fulfilling its promise to help residents remain connected to their community as they age, according to Bruce Morgan, president of BCM Affordable Housing. Nearly all residents who move into the project come from within Woodbridge Township, and many of those not from the town come from neighboring Perth Amboy. Dalina Manor helps residents maintain local ties even after they’ve moved in; 5 percent of the units were constructed to be fully accessible, and all units can be modified to accommodate residents’ changing accessibility needs as they age. Aging in place allows seniors to maintain vital social connections as well as a greater degree of independence.

Funding for the $11.6 million project came primarily from the sale of 9 percent low-income housing tax credits (LIHTCs) to Citi Community Capital, which had been awarded under New Jersey’s senior affordable housing funding cycle. In addition to LIHTC equity, $350,000 in Middlesex County HOME funds and a $2.5 million mortgage from the New Jersey Housing and Mortgage Finance Agency (NJHMFA) helped make Dalina Manor a reality. One of the conditions of an NJHMFA mortgage is the inclusion of units targeted toward seniors experiencing homelessness; Dalina Manor includes five such units, which, unlike the remaining apartments, come fully furnished. Finally, the Woodbridge Affordable Housing Corporation, which had purchased the site from the VFW post, contributed to the project by donating the land. 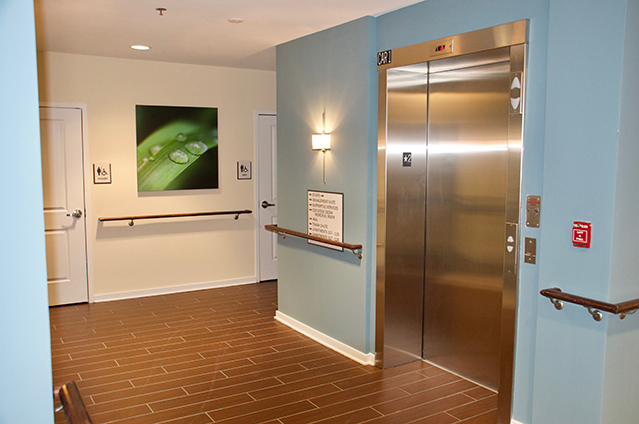 Accessibility features in the design of Dalina Manor. All common spaces are built for accessibility, including handrails along the walls and accessible bathrooms. All units are adaptable to accommodate accessibility needs, helping residents age in place. Credit: BCM Affordable Housing

In addition to local seniors, Dalina Manor serves another important constituency in the Woodbridge community: its veterans. The VFW post’s former meeting hall sat on the site of Dalina Manor, but the post’s dwindling membership and aging building called its survival into question. By including dedicated meeting space for the veterans, the developers ensured that VFW members can continue to meet while being relieved of the expensive burden of renovating an obsolete structure. Cornerstones from the former building were incorporated into the new structure, providing a tangible connection to the site’s history. In addition, a memorial preserved along an adjacent sidewalk honors Woodbridge’s fallen servicemembers.

Dalina Manor is only the most recent in a series of affordable housing projects for seniors that have proven popular with the Woodbridge community, according to Morgan. A previous BCM project, Reinhard Manor, involved the adaptive reuse of a former school building, preserving a piece of Woodbridge’s architectural heritage. Morgan reports that when BCM held an open house for the newly completed project, enthusiastic community members filled the building to capacity for much of that day. Thanks to unflagging support from local elected officials, the warm reception of past affordable housing projects for seniors, and the project’s celebration of Woodbridge’s local heroes, Dalina Manor is embraced as a beneficial community asset.