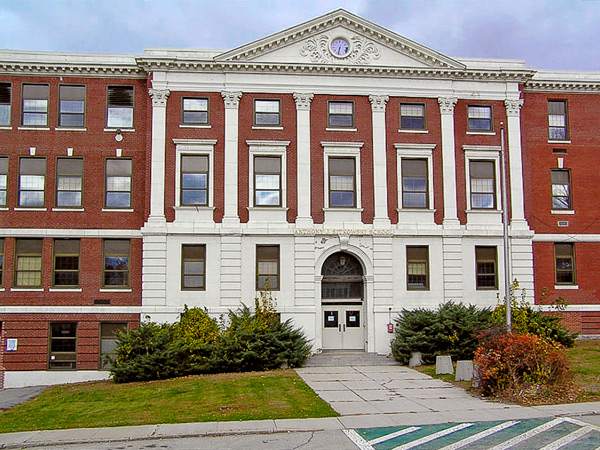 A small town of approximately 17,000 people on the southern border of Massachusetts, Webster began redeveloping its downtown in 2010. A critical aspect of the redevelopment was renovating the community’s historic Anthony J. Sitkowski Middle School, located in the center of town just one block from the downtown thoroughfare of Main Street. The school, a large, four-story brick building with a distinctive white colonnade, was originally built in 1903 but had been left unused since being decommissioned in 2005. Following an extensive rehabilitation, the prominent landmark reopened in 2015 as the Sitkowski School Apartments, with 66 units of affordable senior housing and a new Webster Senior Center.

In 2008, the city of Webster selected Neighborhood of Affordable Housing (NOAH), a Boston-based nonprofit community development corporation, to redevelop the school. NOAH worked with the city to explore possible uses for the building. Connected to Webster’s town hall, the 88,000-square-foot building dominates nearly an entire city block. “We asked, ‘What does the town really want?’” says Philip Giffee, executive director of NOAH. Although there were many suggestions, including demolition, the city decided on affordable senior housing. In 2010, an estimated 16 percent of Webster’s population was over age 65. “According to census data, we knew there was a significant senior and low-income demographic,” reports Giffee. When one town selectwoman commented that Webster also needed a new senior center to replace the aging, inaccessible building only three blocks away, NOAH decided to renovate the school’s gymnasium for this purpose.

The refurbished landmark building now houses 66 residential units. Of these, 59 are one-bedroom apartments and the remaining 7 are two-bedroom units. Each entryway is recessed to frame and showcase the attractive oak woodwork of the doors while creating a sense of privacy. All units follow Universal Design principles and are adaptable to accommodate the needs of individuals with disabilities; all feature large, step-in showers in the bathroom, and four units are completely accessible. One unit is reserved for the hearing impaired. Giffee reports that the large, restored historic windows and high ceilings make the modestly sized apartments feel spacious and comfortable.

The restoration retained many of the building’s original details, such as the oak roll-up doors, wood floors, and red brick façade, and some of the original furnishings were repurposed or reused. For example, the school’s bookshelves were moved into the senior center, and sections of a long antique counter once located in the principal’s office were repurposed for hallway displays. Modern features such as high-efficiency mechanical systems and ENERGY STAR® appliances were integrated with the antique elements. The building received Leadership in Energy and Environmental Design Home Gold certification. 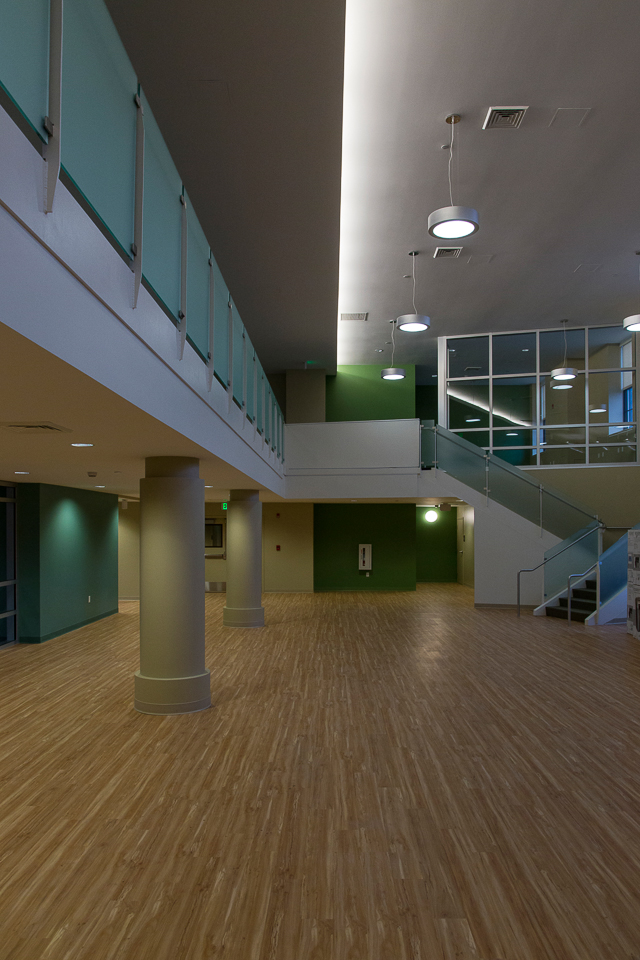 The 9,300 square-foot Webster Senior Center is located in what was once the school’s gymnasium, and includes amenities such as an exercise room, communal kitchen, and hair salon. Credit: Dellbrook JKS

Communal amenities include a lounge area on each floor for socializing and a central laundry room. Seniors also have access to the Webster Senior Center, conveniently located in the building.

The Webster Senior Center and Financing

The senior center, previously housed in a smaller location on nearby School Street, is owned by NOAH and operated by the town of Webster. The 9,300-square-foot center, located in the building’s former gymnasium, features extensive amenities such as a reading room, conference room, art space, exercise room, health office, hair salon, staff offices, and a large communal kitchen that allows food preparation for large crowds. Meals are served daily. The center is staffed by the Council on Aging and provides a range of services, including help accessing benefits and assistance programs, and activities for seniors. The space also functions as a drop-in center where the elderly can receive services as they need them and as a disaster shelter, in case of emergencies such as floods.

The total cost of the renovation was $20.5 million, funded primarily from state and federal Low-Income Housing Tax Credit (LIHTC) programs and the quasi-public state affordable housing financing entity MassHousing. Equity from the 4 percent LIHTC issued for the project totaled $9.4 million, of which slightly over $6 million was from the federal LIHTC program and $3.3 million was from the state LIHTC program. MassHousing contributed funds in the form of a permanent loan, bonds, and a deferred payment loan. The remaining cost of the development was funded by $4.3 million in state and federal historic tax credit equity, funds from the Massachusetts Affordable Housing Trust Fund, and funds from the state’s Department of Housing and Community Development. NOAH deferred its $355,173 developer fee.

The successful repurposing of the historic Sitkowski Middle School provides much-needed affordable senior housing in Webster. Putting the school back into use was also an essential part of the community’s downtown redevelopment initiative. “This was really a key project for the town of Webster,” explains Giffee. “Although the building was faded, it was sentimentally favored by the town.” At around the same time that the senior apartments were completed, Webster finished renovating the police department immediately across the street from Sitkowski, and as of summer 2018 is completing construction of a new, larger library nearby. Sitkowski School Apartments is fully occupied.