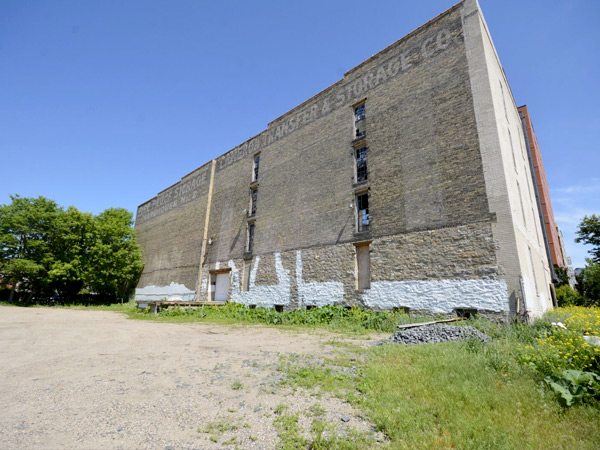 Built in the early 20th century, The Cameron was listed on the National Register of Historic Places due to its unique mix of timber and concrete construction materials. Credit: Schafer Richardson.

The North Loop in Minneapolis, Minnesota, is home to a historic warehouse district that in recent decades has been transformed into a trendy residential neighborhood. As the area develops, rents in the neighborhood have risen out of reach for many of the lower-income individuals who work there. Opened in summer 2016, The Cameron addresses the housing needs of these renters by providing 44 new units of affordable housing in a rehabilitated warehouse, the first new affordable housing in the neighborhood since 2001. The warehouse, built between 1909 and 1911, was recently listed in the National Register of Historic Places because of its unique structural elements. The apartments are available to households earning up to 50 percent and 60 percent of the area median income. The development is part of a new wave of public and private investment in the area.

The formerly vacant warehouse historically known as the Cameron Transfer and Storage Company Building was rehabilitated by Schafer Richardson, a developer that has had a presence in the North Loop since the mid-1990s, when it began to purchase property in the neighborhood. The building now contains 23 studios, 17 one-bedroom units, and 4 two-bedroom units ranging from 384 to 924 square feet. Apartments are meant to be affordable to lower-income working households: 17 units are affordable to households at or below 50 percent of the area median income (AMI), and 27 units are affordable to households at or below 60 percent of AMI. Building amenities include a fitness center, bike storage room, extra storage for residents, an outdoor patio and grilling area, and onsite surface parking for a monthly fee. The apartments are within walking distance of a multimodal transit station and the popular commercial and entertainment corridors of Washington Avenue and Hennepin Avenue.

The North Loop is located just north of the central business district, situated between the Mississippi River and Interstate 94. The neighborhood is home to the Warehouse Historic District, which developed with the expansion of railroads through Minneapolis in the late 19th and early 20th centuries. Since the late 20th century, the North Loop has become increasingly residential: its population grew by more than 2,000 households to a total of 3,054 between 2000 and 2008. The early 21st century saw an influx of high-density residential development as well as the construction of a new Major League Baseball park and multimodal transit station offering light rail, commuter rail, and bus connections. Today the North Loop is one of the fastest-growing neighborhoods in the metropolitan area, popular with young professionals and empty nesters. Mixed-use and residential zoning districts make up the eastern portion of the neighborhood, known as the Upper North Loop (where The Cameron is located), and the western portion, known as the Lower North Loop, is zoned as industrial.

The median rent for the North Loop is $1,612, significantly higher than the city’s overall median rent of $869, suggesting a shortage of affordable housing. Market-rate condominiums dominate the neighborhood’s housing stock; in the mid-2000s, Schafer Richardson developed three new-construction condominium properties in the North Loop on a site adjacent to The Cameron. As the first new affordable housing development in the neighborhood in more than a decade, The Cameron takes advantage of a gap in the marketplace, targeting young professionals and older singles making 60 percent or less of the AMI who work downtown and want housing that is convenient, yet affordable. 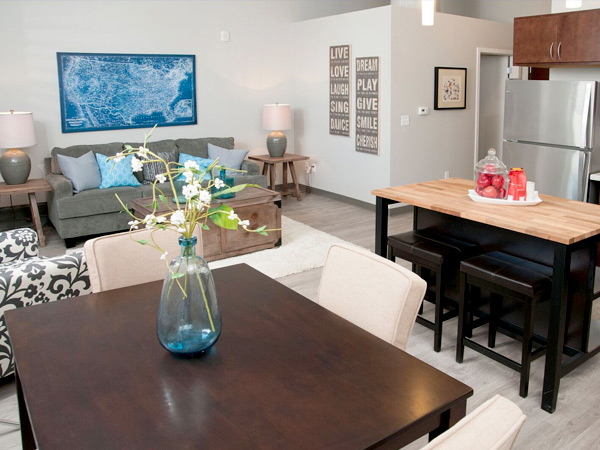 Due to the physical constraints and historical nature of the building, each unit in the Cameron has a unique layout. Credit: Schafer Richardson.

Rehabilitation of a Historic Warehouse

To qualify for state and federal historic tax credits, the developer applied to list the warehouse on the National Register of Historic Places. The building showcases the transition in industrial building techniques from heavy timber construction to reinforced concrete, an innovation in engineering pioneered by Claude Allen Porter Turner. The front half of the building is constructed out of timber, and the back half is constructed out of concrete.

The biggest challenge in the rehabilitation of the warehouse was working within the constraints of the National Park Service’s historic tax credit approval process to honor the building’s historic integrity while also catering to the needs of the intended market and adhering to building codes. These constraints proved to be a creative opportunity; each unit’s layout is unique. Apartments differ in their window placements, construction materials, and walls made from either brick or clay. The unique feel of the units gives the property a market advantage over new construction properties, which tend to have more uniformly designed units.

The total development cost for The Cameron was approximately $12.2 million. The main sources of financing were a HUD 221(d)(4) loan and 4 percent low-income housing tax credit equity. Other funding sources included grants from the city of Minneapolis, Hennepin County, and the Twin Cities Metropolitan Council; state and federal historic tax credits; a land note; and a deferred developer fee.

According to Maureen Michalski, director of development for Schafer Richardson, receiving the historic tax credits was a “game changer” in filling their financing gap. Smaller projects such as The Cameron generate less operating income to offset their significant soft costs, such as legal and financing fees. The federal and state historic tax credits allowed the project to overcome that challenge by providing a combined additional $3.2 million in equity.

The Cameron was fully leased less than 3 months after opening, and its lease renewal rate is 80 percent compared with 50 percent for comparable properties. Many tenants have referred others to The Cameron, indicating a high level of satisfaction. The property benefits the neighborhood by generating activity in a formerly vacant building and adding new neighborhood residents who use other area amenities. The affordable apartments complement the neighboring condominium properties and add to the neighborhood’s historic character, making the building a unique addition to one of Minneapolis’ most popular neighborhoods.