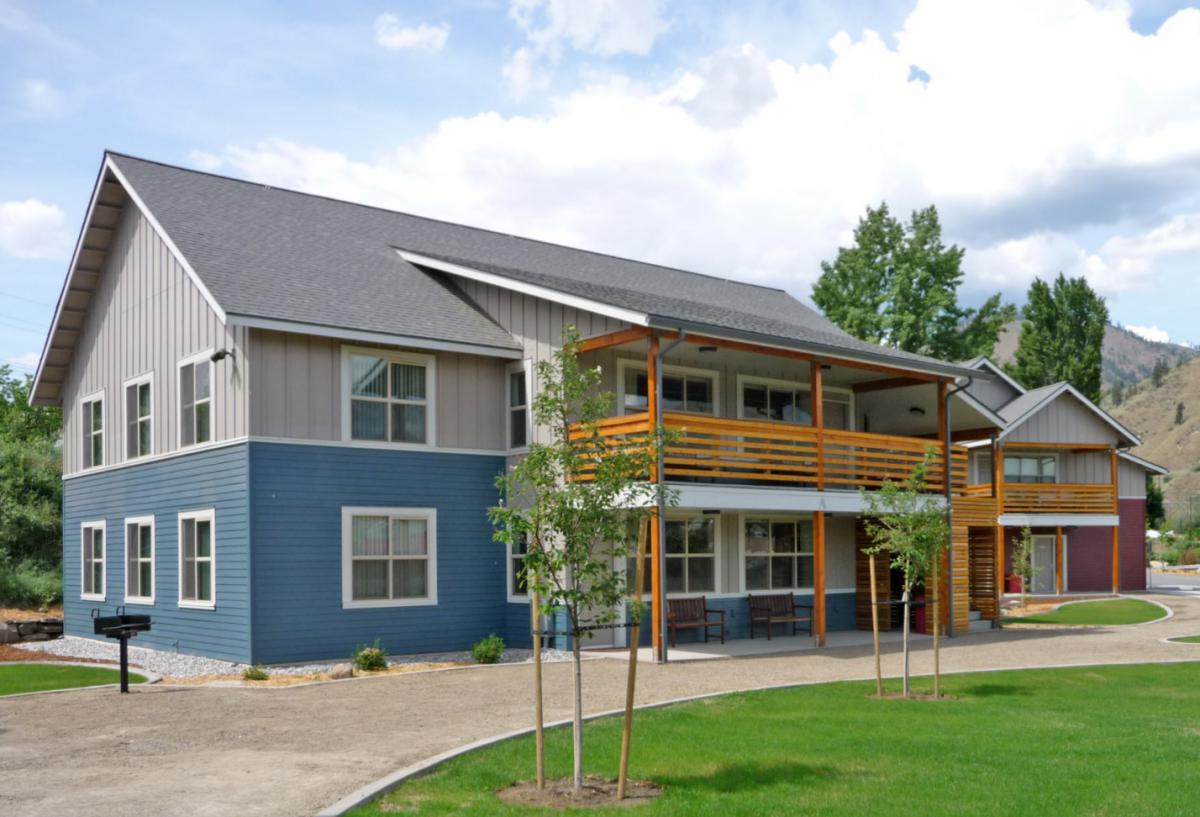 Brender Creek provides affordable housing for seasonal farmworkers in 6 residential buildings — each containing 2 stacked apartments and each apartment having 4 or 6 bedrooms with 3 or 4 beds per room — with a total of 200 beds. Credit: Environmental Works

Finding affordable rental housing is difficult for seasonal farmworkers who travel to Washington state, the nation’s top producer of apples, cherries, red raspberries, and several other crops. The state’s fruit production is concentrated in central Washington, home of Chelan County, where farmowners employed 7,900 seasonal workers in 2012 whose permanent residence was outside of the area. To increase the supply of affordable housing for these workers, a partnership between two nonprofits developed Brender Creek in Cashmere, a city of 3,100 residents in Chelan County. The development provides 200 beds in various configurations to support seasonal agricultural workers and their families. Brender Creek is also designed to be water- and energy-efficient, and it includes open spaces and amenities that encourage a sense of community.

Brender Creek was developed by the Washington Growers League (WGL) and the Office of Rural and Farmworker Housing (ORFH), which provide and manage affordable housing for agricultural workers. WGL owns and operates seasonal farmworker housing developments and manages a rent-a-tent program that provides tents to growers who employ seasonal cherry harvesters. ORFH develops housing for agricultural workers and other rural residents in the state. In 2013, WGL purchased a six-acre property in Cashmere near a bridge that provides access to agricultural fields on both sides of the Columbia River. ORFH served as the developer, arranging the financing and working with the architecture firm Environmental Works to create a site plan and design the buildings. Brender Creek was completed at the beginning of the 2015 growing season. According to Mike Gempler, WGL’s executive director, housing developments such as Brender Creek benefit not only the workers and their families but also farmowners and consumers. The Washington State Fruit Commission’s Good Fruit Grower magazine quotes Gempler as saying, “We have a lot of respect for the people who come on a seasonal basis and do the very hard work of pruning, and tying, and training, and picking, and getting our products to market. They need a place that’s secure, safe, and comfortable.”

Brender Creek includes six furnished residential buildings and three nonresidential buildings for an office, common facilities, and a maintenance workshop. Each residential building contains 2 stacked apartments, and each apartment has 4 or 6 bedrooms, providing a total of 200 beds. Ten of the apartments have 4 bedrooms, and each bedroom contains 4 beds for a total of 16 beds per apartment. Each of the other 2 apartments has 6 bedrooms with 3 or 4 beds per room for a total of 20 beds per apartment. One of the six-bedroom apartments, on the bottom floor, complies with the standards of the Americans with Disabilities Act. According to Gempler, WGL, which operates Brender Creek, learned from its Sage Bluff development — built with six beds in each of the bedrooms — that single farmworkers and farmworker families prefer not to share a bedroom. In the Brender Creek development, keeping the number of beds per room to three or four accommodates a family in their own room without leaving beds unoccupied.

The apartments accommodate large numbers comfortably by including two bathrooms in every apartment. To provide additional privacy and efficiency, doors separate the components of the bathrooms, such as showers and toilets. To maintain a safe environment for agricultural workers and their belongings, WGL installed security cameras. WGL also employs an onsite manager, who lives in an apartment in the office building, to address maintenance and other issues. 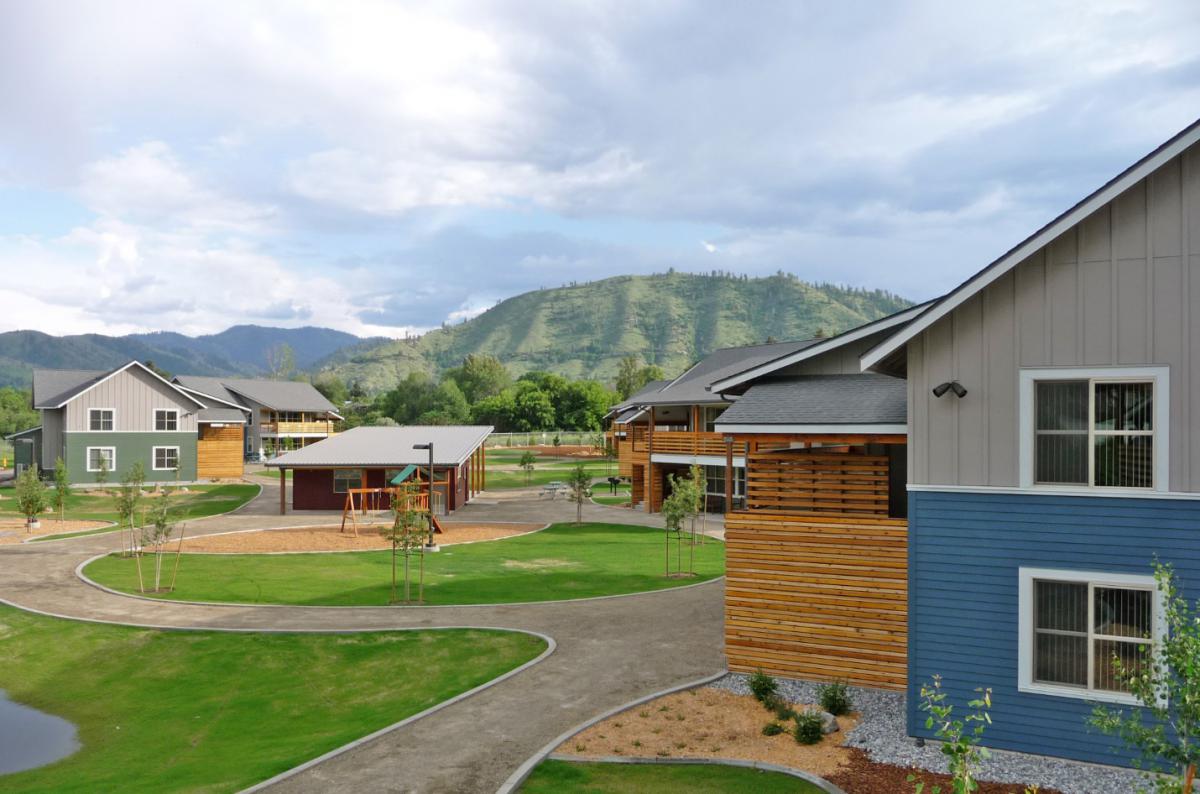 As a seasonal farmworker housing facility, Brender Creek is open only during the area’s growing season, which typically runs from the beginning of May to as late as mid-November for the fruit crops. However, reforestation activities can bring in workers as early as March. Tenants must verify that they are low-income agricultural workers. The rental rates are $8 per bed per night for walk-ins; reserved beds, which growers often rent in blocks, cost $9 per bed per night. Growers and farmworkers can choose how long they want to stay at Brender Creek; they can rent for a night, a few weeks, or the whole season. Renting on a nightly basis can lead to high turnover, but the flexibility also allows the development to accommodate workers who come to the county throughout the growing season.

According to Gempler, WGL designed the development and its common areas to foster a sense of community among its residents. One of the development’s nonresidential buildings contains a laundry facility and community rooms for health screenings and English classes. Brender Creek also has a playground, porches, patios, picnic tables, and charcoal grills. In addition to these amenities, the development provides free Wi-Fi access for tenants via a fiber optic connection, and WGL has already added an extra fiber optic line to help meet the high demand for Internet access. The development is also within walking distance of restaurants and stores in downtown Cashmere, and a bus stop is located at the site to help residents travel easily to other area destinations.

Several features were designed to make Brender Creek sustainable. The development was built to the Washington Department of Commerce’s Evergreen Sustainable Development standards, which include requirements for water conservation and energy efficiency. The buildings were constructed with materials that are durable and require minimal maintenance. WGL also worked with local environmental groups to restore more than an acre of riparian wetlands that had been damaged when the site was used as a horse pasture.

The Washington State Housing Trust Fund, which requires compliance with the Evergreen Sustainable Development Standard, was the sole source of development funding for the $6 million project. Cashmere Valley Bank provided an additional $100,000 loan to help WGL purchase appliances, furniture, mattresses, lawnmowers, and other equipment for Brender Creek. The trust fund has also contributed $20,000 annually for operating and maintenance costs, but Gempler hopes that the development will become financially self-sufficient and not need this support in the near future.

According to Gempler, beds at Brender Creek have been in high demand, and the development’s occupancy rate was nearly 100 percent during its first season. WGL staff have also noticed fewer farmworkers living in substandard conditions since the opening of Brender Creek. With a 2012 survey estimating a shortage of more than 36,000 beds for seasonal farmworkers, the need for additional affordable housing throughout Washington remains urgent. Both WGL and ORFH are continuing to develop and manage farmworker housing that will address this need. WGL’s rent-a-tent program is ongoing, but the organization hopes to replace the tents with solid structures. WGL is also working on a new solid-structure development with 120 beds in Mattawa, Washington. The first phase is expected to be completed by fall 2016, and WGL has submitted an application for financing for the second phase.