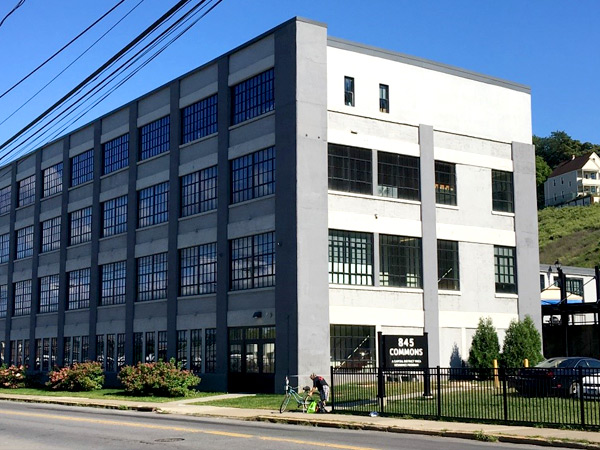 A former factory in Schenectady, New York, is finding new life as supportive housing for men, including veterans, disabled individuals, and those facing mental illness. Once an insulator factory, 845 Commons is now a 96,060-square-foot residential property that serves some of the community’s most vulnerable residents and demonstrates the critical role of partnerships in integrating affordable housing into community and economic development.

Opened in January 2015, the 845 Commons project took approximately 8 years to complete and involved the work of numerous community partners at the state level, including the New York State offices of Homes and Community Renewal (HCR), Temporary and Disability Assistance (OTDA), and Historic Preservation. Local partners included the city government, the Schenectady Metroplex Development Authority, the City of Schenectady Industrial Development Agency (IDA), and the Capital District YMCA, which manages 845 Commons. The Preservation League of New York State recognized 845 Commons with an Historic Preservation Award in April 2016 for reviving the 100-year-old property.

Before the completion of 845 Commons, the Capital District YMCA previously housed male veterans in an aging building in downtown Schenectady that had 90-square-foot rooms and lacked private bathrooms or showers. As the Schenectady Metroplex Development Authority, dedicated to streamlining economic development in the region, began exploring the possibility of selling the centrally located YMCA facility, it became clear that the sale would potentially displace the YMCA’s downtown residents who required supportive housing. Many community partners began to mobilize to identify possible sites and strategies for rehousing the YMCA’s residents while also achieving the city’s broader goals of downtown redevelopment. 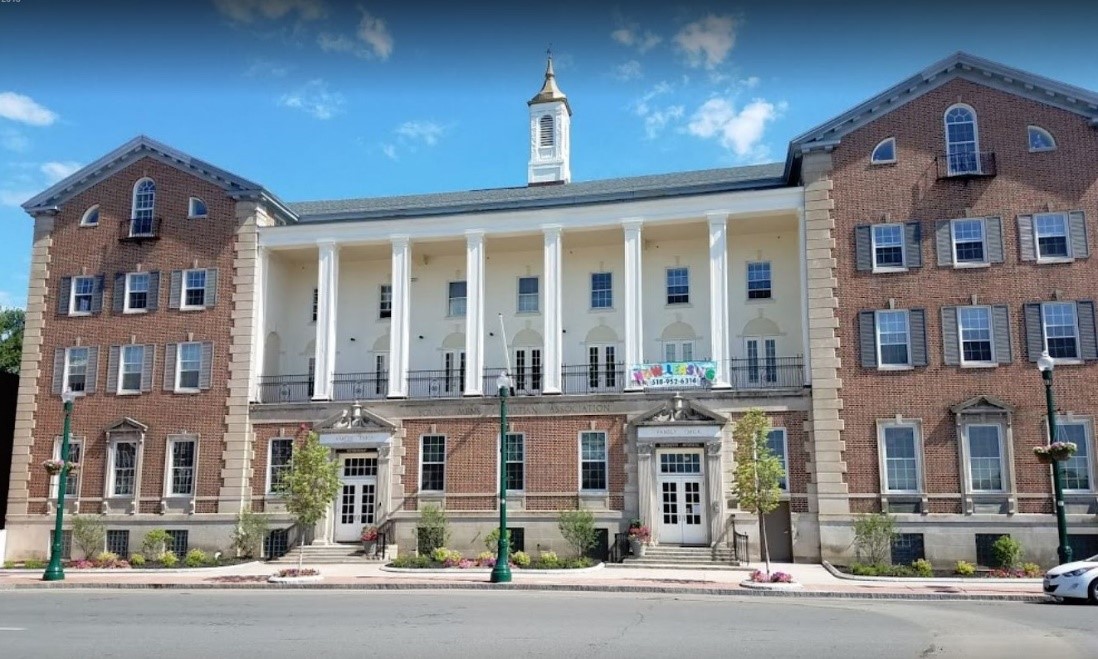 Developers ultimately decided to build 845 Commons on the former Mica Insulator Company, a factory built in 1915 near the city’s downtown that had been vacant for many years. The site represented a unique opportunity to house a vulnerable group of men, including military veterans; preserve a historic factory, collocate housing with the county’s Department of Social Services, and connect an adjacent neighborhood to the central business district. Partners from the city, state, and private sector drew the important connection between the city’s derelict buildings and the resources available to adaptively reuse failing buildings for historic preservation and low-income housing.

The renovated factory now offers 155 furnished studio apartments, each with approximately 400 square feet of living space, including a bathroom and a small kitchen with a stove, microwave, and cabinets, as well as shared living space with a commercial-grade kitchen and dining area for residents. Managed by the Capital Area YMCA, 845 Commons provides supportive housing arrangements for veterans, individuals with disabilities, and residents with mental illness. Galesi Group, the developer, played a key role in managing the complex process of modernizing an old building, removing lead paint and asbestos, installing new central heat and air conditioning units, and accessing historic tax credits to help fund the renovations. Dave Buicko, president and chief executive officer of the Galesi Group, notes that numerous partners, including state offices, were “very invested in making the 845 Commons project successful.”

The project required $26.2 million in overall funding. Approximately 25 percent of the total project cost, or $6.7 million, came from federal and state historic tax credit equity. Other funding sources included $5.5 million from OTDA's Homeless Housing and Assistance Program, $11.9 million in equity from federal low-income housing tax credits administered by HCR, a $200,000 loan from the Capital District YMCA, a $200,000 subordinate loan from the City of Schenectady IDA, and a $50,000 grant from Schenectady Metroplex Development Authority. 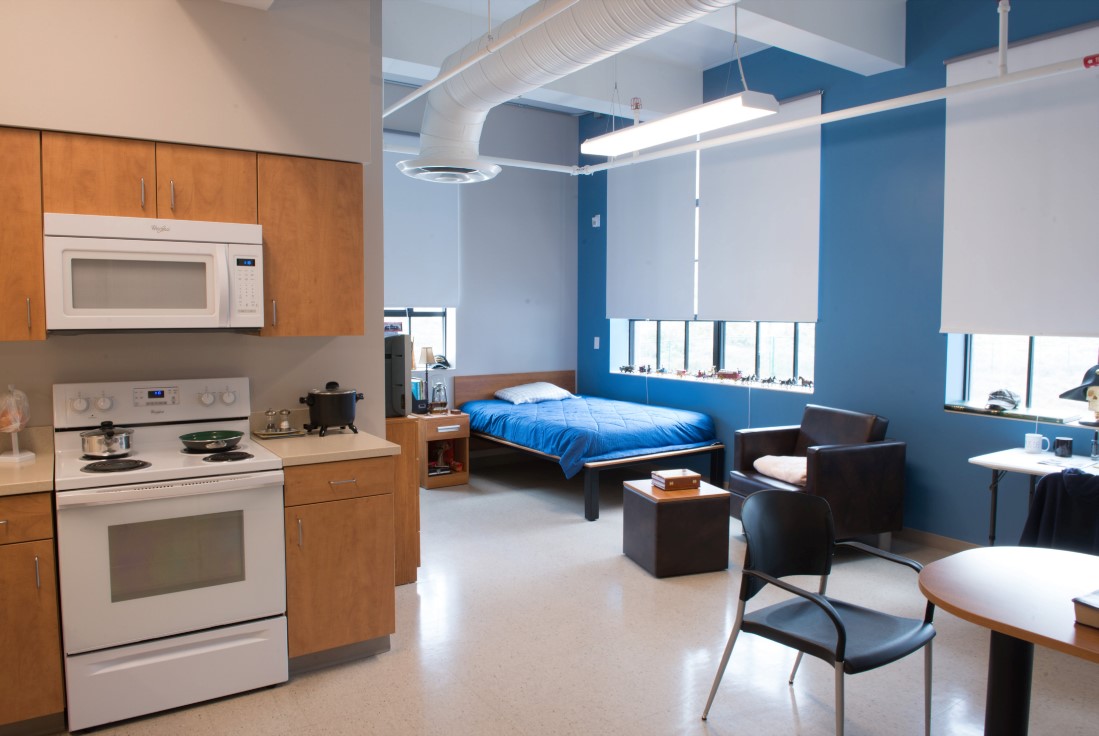 The success of the 845 Commons project stems in part from the community’s broad support for the relocation of a population in need. Jayme Lahut, executive director of the Schenectady Metroplex Development Authority, explains, “The project generated tremendous community support by effectively relocating residents of the YMCA to a new and better facility on a bus line and next to the county’s Department of Social Services building.” In fact, the Schenectady County Department of Social Services relocated to a nearby mill building, allowing residents and staff to easily connect to referrals and services from the county. In addition to 24-hour staffing and case management provided by the Capital District YMCA, services provided to residents vary from referrals for medical or behavioral health care, to life skills development, employment training and placement, and opportunities for civic engagement and volunteerism. Currently, 845 Commons houses 155 Schenectady County residents, of which 72 are veterans. Units in the renovated building range from 380 to 420 square feet; are furnished; and include a kitchen with a stove, microwave, and cabinets. Common spaces include community rooms and a full cafeteria where residents can share meals and gain work experience in the kitchen. With comprehensive services and comfortable living spaces, 845 Commons has consistently maintained a waiting list of eligible residents. Lou Magliocca, executive director of 845 Commons, notes that the project is “a perfect example of how funding sources can come together.” Overall, 845 Commons serves as an important reminder of how creative thinking and partnerships can integrate affordable housing into communities while preserving historic landmarks and leveraging strategic urban development resources.